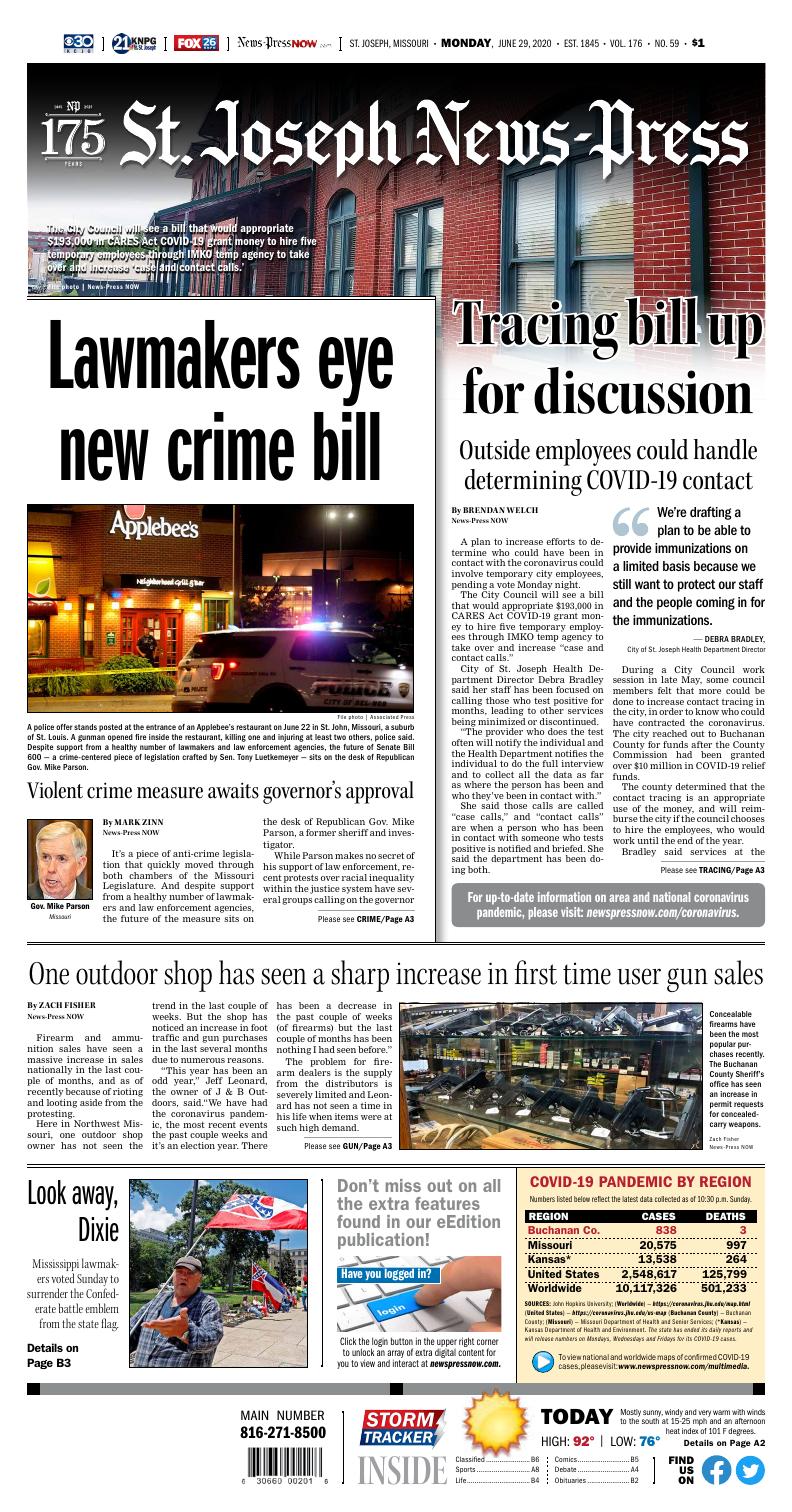 Missouri Gov. Mike Parson is set to lay out his vetoes and approvals of legislation passed by both chambers. One crime measure is turning controversial, but will the former sheriff budge? (AP Photo/Charlie Riedel)

Among the bills Missouri Gov. Mike Parson will be looking at is a crime measure that is starting to draw backlash

It’s a piece of anti-crime legislation that quickly moved through both chambers of the Missouri Legislature. And despite support from a healthy number of lawmakers and law enforcement agencies, the future of the measure sits on the desk of Republican Gov. Mike Parson, a former sheriff and investigator.

While Parson makes no secret of his support of law enforcement, recent protests over racial inequality within the justice system have several groups calling on the governor to veto Senate Bill 600, a crime-centered piece of legislation crafted by Sen. Tony Luetkemeyer.

“What it does is it ends the catch-and-release practice that allows violent offenders to re-offend,” Luetkemeyer said. “It also bars probation for people who commit second-degree murder and other dangerous felonies and it enhances penalties for felons who use guns to commit violent crimes.”

Within the last month, opposition has been growing in an effort to convince Parson to veto SB 600. Among those voicing concern are State Reps. Steven Roberts and Crystal Quade. Roberts is the chairman of the Missouri Legislative Black Caucus and Quade serves as the House Minority Leader. Both are Democrats.

”There is one action you can and should take right now to keep the situation from getting worse, and that is to veto Senate Substitute for Senate Bill 600,” the open letter to the governor read, “legislation that seeks to take a significant step backward from the important sentencing reforms Missouri has adopted in recent years.”

Luetkemeyer rejected opposition to the bill and said it’s about keeping the most dangerous of felons off the streets.

“The bill is broadly supported by law enforcement at every level. You’ve got the police chiefs who are in support of it, you’ve got the sheriff’s association and prosecuting attorneys association,” Luetkemeyer said. “The only groups who have come out against this bill are liberal, left-leaning fringe groups like the ACLU, who are siding with violent criminals.”

Luetkemeyer has indeed pulled together a heavyweight list of organizations that have come out in support of the bill, including the Missouri Association of Prosecuting Attorneys, the Missouri Police Chiefs Association, Missouri Sheriffs Association and the St. Louis, Kansas City and Missouri fraternal orders of police.

As for the ongoing cries to “defund the police” that have popped-up around the country, Luetkemeyer said that’s something he is vehemently opposed to and called the idea “ridiculous.”

“I mean, we have some of the most dangerous cities in America located right here in Missouri,” he said. “If anything, we need to make sure that we are investing in our police and supporting them in what they’re doing.”

Parson is set to begin reviewing several of the bills that passed both chambers next week, with either approval or veto stamps given out as early as July.

“I feel optimistic about it,” Luetkemeyer told News-Press NOW. “I think that this is a bill that, frankly, given the environment that we’re in now, is probably even more important than when we passed it a few months ago.

”The governor is a former sheriff. He’s a law enforcement officer. He understands the importance of law and order and keeping our community safe. And so I believe the governor will make the right decision and sign the bill into law,” he said.

A plan to increase efforts to determine who could have been in contact with the coronavirus could involve temporary city employees, pending a vote Monday night.

The City Council will see a bill that would appropriate $193,000 in CARES Act COVID-19 grant money to hire five temporary employees through IMKO temp agency to take over and increase “case and contact calls.”

City of St. Joseph Health Department Director Debra Bradley said her staff has been focused on calling those who test positive for months, leading to other services being minimized or discontinued.

“The provider who does the test often will notify the individual and the Health Department notifies the individual to do the full interview and to collect all the data as far as where the person has been and who they’ve been in contact with.”

She said those calls are called “case calls,” and “contact calls” are when a person who has been in contact with someone who tests positive is notified and briefed. She said the department has been doing both.

During a City Council work session in late May, some council members felt that more could be done to increase contact tracing in the city, in order to know who could have contracted the coronavirus. The city reached out to Buchanan County for funds after the County Commission had been granted over $10 million in COVID-19 relief funds.

The county determined that the contact tracing is an appropriate use of the money, and will reimburse the city if the council chooses to hire the employees, who would work until the end of the year.

Bradley said services at the Health Department are returning, but are not in full effect. The new employees could allow back-to-school immunizations to be done more efficiently.

“It’s still very limited, but once we have people who can take over the case calls and the contact calls, then, particularly the nurses, will be able to do the immunization clinic.”

Bradley said they are working on a way to get children their required immunizations while social distancing, and more details will be released on that plan soon.

Sexually transmitted disease testing has returned to the clinic and requires an appointment, as always.

Health educators are getting back into their normal duties after concentrating on phone calls during the pandemic, and will be able to continue regular duties and services if the temporary employees are hired.

A COVID call center can be contacted to ask questions and receive information about the virus and recommended measures from the Centers for Disease Control and Prevention. The Health Department will continue to operate that hotline.

“We have the line live, but we’re kind of morphing into our normal business,” Bradley said.

The gun rack at J & B Outdoors is full but getting the supply has been difficult for the shop. Gun sales have been through the roof since the coronavirus pandemic began.

Concealable firearms have been the most popular purchases recently. The Buchanan County Sheriff’s office has seen an increase in permit requests for concealed-carry weapons.

Firearm and ammunition sales have seen a massive increase in sales nationally in the last couple of months, and as of recently because of rioting and looting aside from the protesting.

Here in Northwest Missouri, one outdoor shop owner has not seen the trend in the last couple of weeks. But the shop has noticed an increase in foot traffic and gun purchases in the last several months due to numerous reasons.

“This year has been an odd year,” Jeff Leonard, the owner of J & B Outdoors, said.“We have had the coronavirus pandemic, the most recent events the past couple weeks and it’s an election year. There has been a decrease in the past couple of weeks (of firearms) but the last couple of months has been nothing I had seen before.”

The problem for firearm dealers is the supply from the distributors is severely limited and Leonard has not seen a time in his life when items were at such high demand.

“It’s a nationwide shortage. We see it everywhere and we deal with six or seven major firearm distributors. There is just nothing out there firearm and ammunition wise,” Leonard said.

According to J & B Outdoors, the most popular firearm being bought in the past couple of months has been concealable weapons rather than long rifles or shotguns.

Missouri does not require open and concealed carry permits in places that allow it. For the places that restrict concealed carry, a permit is needed or it can be used in other states that acknowledge Missouri permits. According to the Buchanan County Sheriff’s office, there has been an increase in demand this year for those permits.

The increased firearm training pertains to people buying weapons for the first time. There also is something unique with the purchases taking place in the last couple of weeks, Leonard said.

“One thing that we are seeing is something that I have never seen in this business before,” Leonard said. “There are a lot of first-time firearm owners. I would say in the past couple of weeks, 50 to 60% of our business is people who have never owned a firearm.”

Puett acknowledged there have been more guns purchased in the area and that shops have been limited on their ammunition supply. But there has not been more firearm use or firearm traffic in the county because of it.

J & B Outdoors also has had to limit the amount of ammunition purchased from time to time depending on the need. 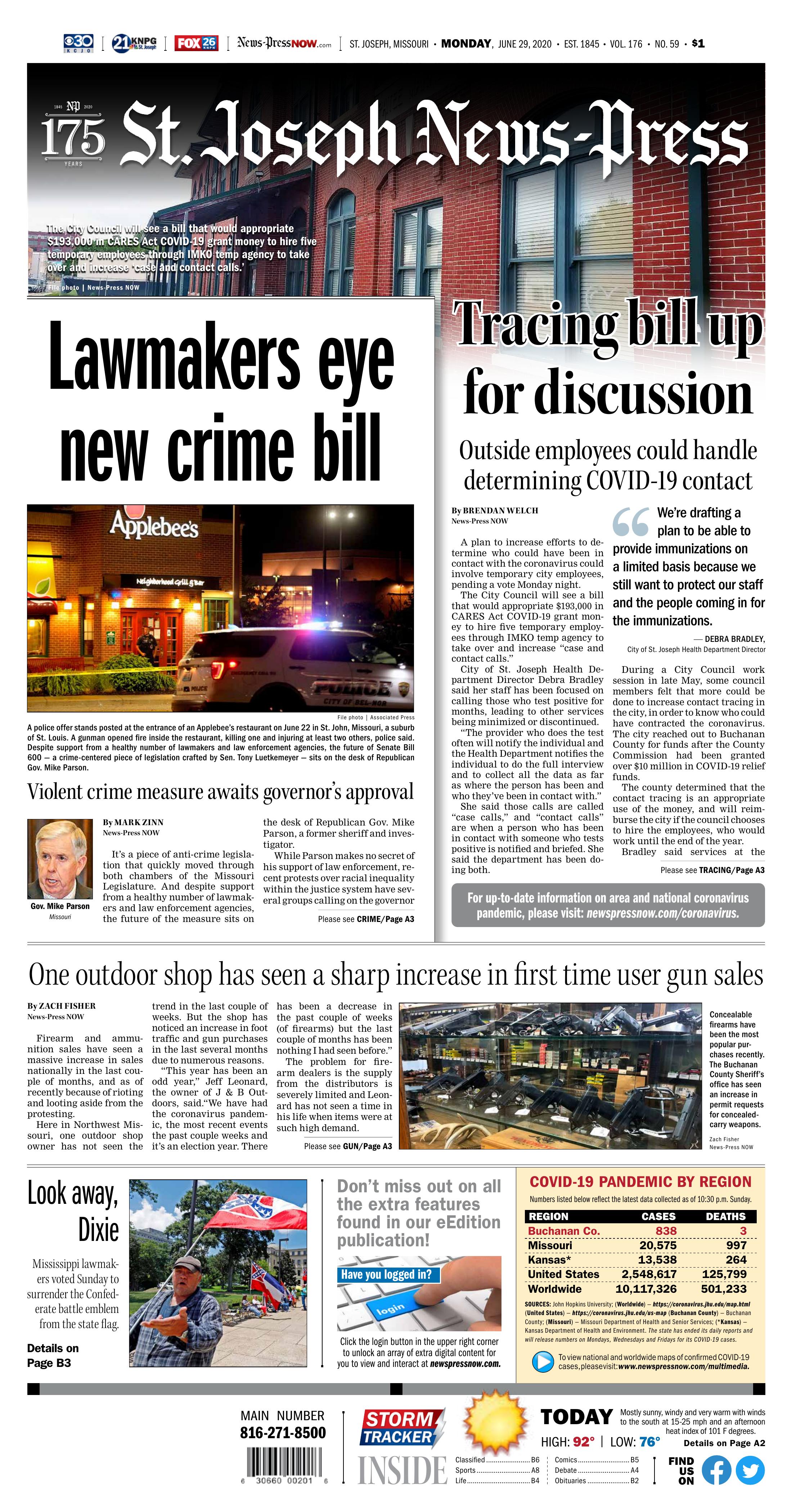