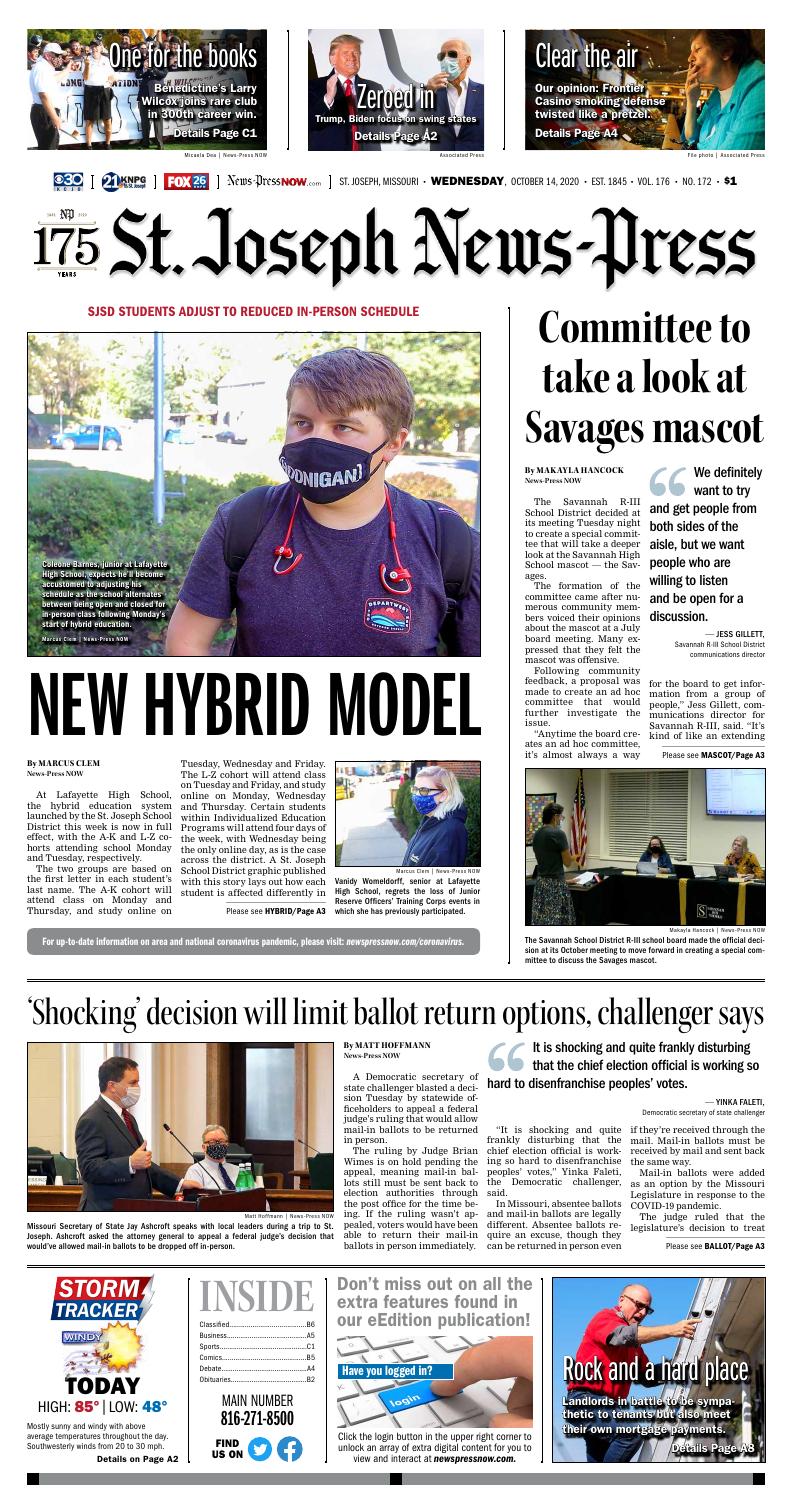 Vanidy Womeldorff, senior at Lafayette High School, regrets the loss of Junior Reserve Officers’ Training Corps events in which she has previously participated.

Coleone Barnes, junior at Lafayette High School, expects he’ll become accustomed to adjusting his schedule as the school alternates between being open and closed for in-person class following Monday’s start of hybrid education.

The Lafayette Irish will need luck to get through the remainder of the academic year with no further COVID-19 disruptions as changes on Monday means most students won't be in the building three days out of the week.

This graphic provided by the St. Joseph School District communications office shows how each level of schooling will be done in the hybrid system.

At Lafayette High School, the hybrid education system launched by the St. Joseph School District this week is now in full effect, with the A-K and L-Z cohorts attending school Monday and Tuesday, respectively.

The two groups are based on the first letter in each student’s last name. The A-K cohort will attend class on Monday and Thursday, and study online on Tuesday, Wednesday and Friday. The L-Z cohort will attend class on Tuesday and Friday, and study online on Monday, Wednesday and Thursday. Certain students within Individualized Education Programs will attend four days of the week, with Wednesday being the only online day, as is the case across the district. A St. Joseph School District graphic published with this story lays out how each student is affected differently in the new system.

Vanidy Womeldorff is among the Irish attending for four days a week. A keen participant in the Junior Reserve Officers’ Training Corps, ahead of what she hopes will be the beginning of a career in the U.S. Navy after graduating, she said she misses the parades and drill ceremonies she enjoyed before COVID-19 hit the community. Womeldorff now urges her peers to follow pandemic containment guidelines so the situation doesn’t get any worse.

“Please, like, wear your mask at all times,” she said. “You won’t get to do half of the stuff you used to be able to do.”

The new system comes as the virus is flaring up once again across the nation. The 38th resident of Buchanan County to die of COVID-19 became known on Tuesday via the St. Joseph Health Department. To date, none of the confirmed local pandemic fatalities have been identified as children or young adults; the concern is that spread within a school building can result in elder, more vulnerable relatives being exposed by students returning home. Older teachers and staff are also at risk. The new hybrid education schedule, in part, was driven by the number of unfilled education labor needs for SJSD.

Coleone Barnes, a junior at Lafayette, said the new schedule has — to a degree — taken a weight off of his shoulders. The hope is that the schedule will allow the school to stay open part of the week for the indefinite future, and he can plan his home and work schedules around it. Yet, every day of lost in-person interaction with his peers is personally felt.

“You never really realize how big social, like interacting socially, with people is, until it gets taken away and you’re quarantined for three months,” Barnes said, referring to what happened this past spring. “It just becomes stressful, because you gotta balance certain things, and it’s a whole new lifestyle at this point.”

The Savannah School District R-III school board made the official decision at its October meeting to move forward in creating a special committee to discuss the Savages mascot.

The Savannah R-III School District decided at its meeting Tuesday night to create a special committee that will take a deeper look at the Savannah High School mascot — the Savages.

The formation of the committee came after numerous community members voiced their opinions about the mascot at a July board meeting. Many expressed that they felt the mascot was offensive.

Following community feedback, a proposal was made to create an ad hoc committee that would further investigate the issue.

“Anytime the board creates an ad hoc committee, it’s almost always a way for the board to get information from a group of people,” Jess Gillett, communications director for Savannah R-III, said. “It’s kind of like an extending arm of the board.”

The committee will research the origins of the savage mascot, including where it came from and how it has evolved.

Gillett said they also will look into cost factors associated with a potential change.

An application has been created for anyone interested in becoming a member of the committee. Gillett said the board is looking for Savannah community members to apply.

“We want somebody who’s going to really be there and be able to serve,” Gillett said. “We definitely want to try and get people from both sides of the aisle, but we want people who are willing to listen and be open for a discussion.”

The applications will be available on the school board’s website and applicants will be selected at a work session that will be held before the next board meeting on Nov. 10.

Gillett said the committee will report findings and recommendations to the school board during monthly meetings.

Missouri Secretary of State Jay Ashcroft speaks with local leaders during a trip to St. Joseph. Ashcroft asked the attorney general to appeal a federal judge’s decision that would’ve allowed mail-in ballots to be dropped off in-person.

A Democratic secretary of state challenger blasted a decision Tuesday by statewide officeholders to appeal a federal judge’s ruling that would allow mail-in ballots to be returned in person.

The ruling by Judge Brian Wimes is on hold pending the appeal, meaning mail-in ballots still must be sent back to election authorities through the post office for the time being. If the ruling wasn’t appealed, voters would have been able to return their mail-in ballots in person immediately.

“It is shocking and quite frankly disturbing that the chief election official is working so hard to disenfranchise peoples’ votes,” Yinka Faleti, the Democratic challenger, said.

Mail-in ballots were added as an option by the Missouri Legislature in response to the COVID-19 pandemic.

The judge ruled that the legislature’s decision to treat mail-in and absentee ballots differently was illegal and violated the equal protection clause of the U.S. Constitution.

“In this context, any harm or cost to defendants (the state) in implementing this change is minimal, especially when weighed against the risk of total disenfranchisement of Missouri voters,” Wimes wrote in conclusion.

Missouri Secretary of State Jay Ashcroft didn’t respond to a request for comment for this story.

“I am disappointed a federal judge decided to legislate from the bench and overturn the will of the people, through their elected representatives, to have safe and secure elections,” Ashcroft told a St. Louis Public Radio reporter.

Faleti applauded the judge’s decision Wednesday, and said the legislature made a mistake in the first place by treating the two voting options differently.

“You should have folks voting absentee and folks voting by mail on equal footing,” Faleti said. “There really should be no distinction or difference in how they request and how they return their ballot.”

The appeal is being handled by Missouri Attorney General Eric Schmitt, at the request of Ashcroft.

Faleti’s comments come on the same day he released a campaign ad in which he criticized Ashcroft for opposing same-day registration, early voting and “even mail-in voting.”

During previous appearances in St. Joseph, Ashcroft touted in-person voting as his preferred method and said it would be safe to head to the polls in 2020.

When asked previously, Ashcroft declined to label voter fraud as “significant” in Missouri, instead saying there have been some “irregularities” with various forms of mailed ballots. 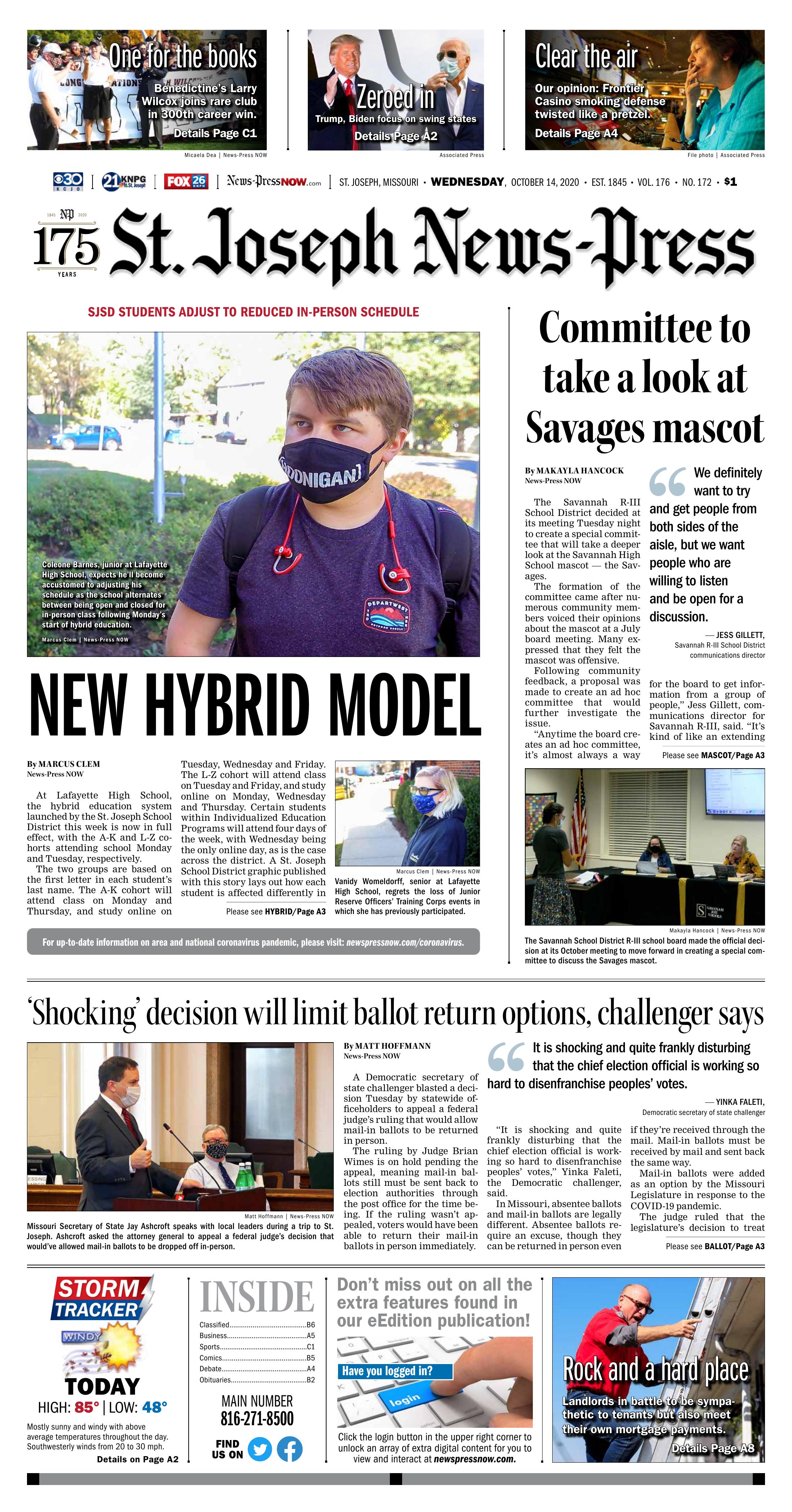