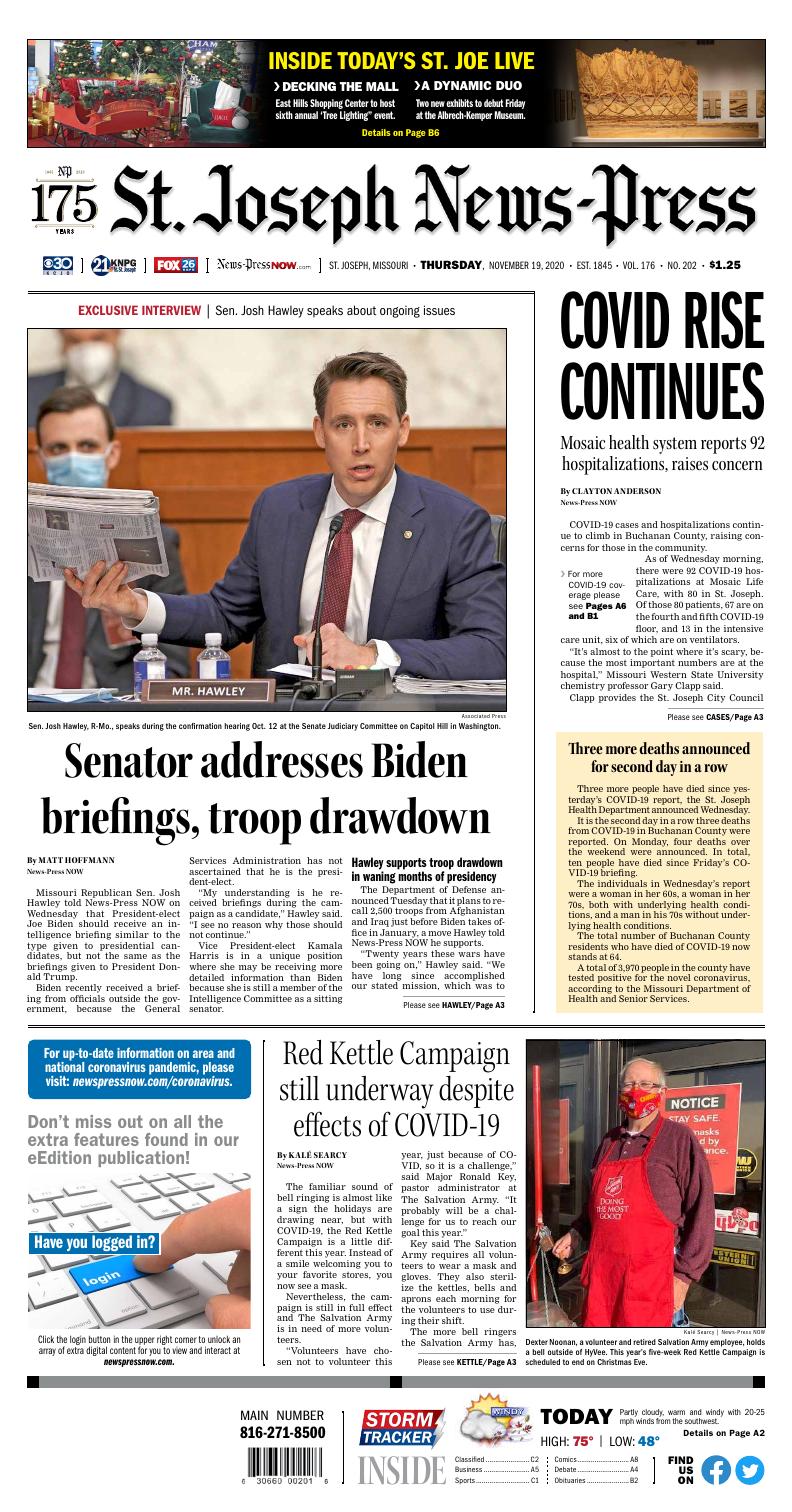 Missouri Republican Sen. Josh Hawley told News-Press NOW on Wednesday that President-elect Joe Biden should receive an intelligence briefing similar to the type given to presidential candidates, but not the same as the briefings given to President Donald Trump.

Biden recently received a briefing from officials outside the government, because the General Services Administration has not ascertained that he is the president-elect.

“My understanding is he received briefings during the campaign as a candidate,” Hawley said. “I see no reason why those should not continue.”

Vice President-elect Kamala Harris is in a unique position where she may be receiving more detailed information than Biden because she is still a member of the Intelligence Committee as a sitting senator.

The Department of Defense announced Tuesday that it plans to recall 2,500 troops from Afghanistan and Iraq just before Biden takes office in January, a move Hawley told News-Press NOW he supports.

“Twenty years these wars have been going on,” Hawley said. “We have long since accomplished our stated mission, which was to disable Al Qaeda and to make sure that we had to place the counterterrorism resources that we need to make sure that terrorist groups don’t strike the American homeland.”

Hawley said he supports leaving some troops in place to fulfill a “counterterrorism” mission.

The drawdown has been criticized by both Democrats and Republicans, including Republican Senate Majority Leader Mitch McConnell, who called the move a “mistake.”

Under the DOD’s current plan, about 2,500 troops would remain in Afghanistan and 2,500 will remain in Iraq.

During a Senate hearing on Wednesday, Hawley questioned Facebook CEO Mark Zuckerberg about information Hawley received from a whistleblower.

“What they (the whistleblower) said is that Facebook uses an internal tool called ‘tasks,’ which is a project management tool, to coordinate censorship with Google and Twitter,” Hawley said. “So the three of them talk and coordinate how they’re going to address different individuals.”

Zuckerberg told Hawley that the companies do coordinate on “security related” topics like “signal around a terrorist attack or child exploitation imagery.”

“That is distinct from the content moderation policies,” he said.

Hawley pressed Zuckerberg to supply a list of all mentions of “Twitter” or “Google” on the “tasks” platform to the senate committee, something Zuckerberg said he couldn’t commit to.

A bill aimed at improving the safety of duck boats, sponsored by Hawley, has advanced to the Senate floor and could be voted upon before the current Congress ends Jan. 3.

“This really should be a no-brainer,” Hawley said. “This bill will, I hope, will make tragedies like the one that we’ve seen in our state on Table Rock Lake, and that unfortunately happened in a lot of places, make those things of the past.”

The bill would see the removal of canopies from duck boats and would require life vests to be worn, among other safety precautions.

Vehicles line up with people waiting to be tested for COVID-19 as part of a community drive-thru testing event at Krug Park in October. COVID-19 cases and deaths have continued to rise in Buchanan County, raising concerns among those in the community.

COVID-19 cases and hospitalizations continue to climb in Buchanan County, raising concerns for those in the community.

As of Wednesday morning, there were 92 COVID-19 hospitalizations at Mosaic Life Care, with 80 in St. Joseph. Of those 80 patients, 67 are on the fourth and fifth COVID-19 floor, and 13 in the intensive care unit, six of which are on ventilators.

“It’s almost to the point where it’s scary, because the most important numbers are at the hospital,” Missouri Western State University chemistry professor Gary Clapp said.

Clapp provides the St. Joseph City Council with the seven-day and 14-day rolling averages. Daily cases have seen the biggest jump since earlier this spring when Mayor Bill McMurray issued a shelter in place ordinance.

Clapp said the spike comes right in line with Halloween and the election, when a lot of people congregated inside buildings that could have had bad air circulation, which causes the virus to spread faster.

“I know at least a couple people who were positive at the time of the election and didn’t know it, so they could have been super spreaders when we went into our polling booth, and it was picked up there,” Clapp said.

Clapp said when there is no outside air being circulated into buildings, the water droplets sit in the air and cause the virus to be more transmissional.

Although the St. Joseph City Council instituted a mask mandate and extended it 90 more days Monday, there has not been a significant sign of the virus slowing down.

“Whatever we’re doing, it’s not working,” Northwest Health Services physician Dr. Francisco Aleman said. “I believe that we maybe have become too relaxed with some of these recommendations, we need to slow this down before it starts to get worse.”

In Buchanan County there have been ten COVID-19 related deaths since Friday’s COVID-19 briefing was released by the St. Joseph Health Department. Four deaths were announced on Monday, three on Tuesday, and three more on Wednesday.

It is the second day in a row three deaths from COVID-19 in Buchanan County were reported. On Monday, four deaths over the weekend were announced. In total, ten people have died since Friday’s COVID-19 briefing.

The total number of Buchanan County residents who have died of COVID-19 now stands at 64.

A total of 3,970 people in the county have tested positive for the novel coronavirus, according to the Missouri Department of Health and Senior Services.

Dexter Noonan, a volunteer and retired Salvation Army employee, holds a bell outside of HyVee. This year’s five-week Red Kettle Campaign is scheduled to end on Christmas Eve.

The familiar sound of bell ringing is almost like a sign the holidays are drawing near, but with COVID-19, the Red Kettle Campaign is a little different this year. Instead of a smile welcoming you to your favorite stores, you now see a mask.

Nevertheless, the campaign is still in full effect and The Salvation Army is in need of more volunteers.

“Volunteers have chosen not to volunteer this year, just because of COVID, so it is a challenge,” said Major Ronald Key, pastor administrator at The Salvation Army. “It probably will be a challenge for us to reach our goal this year.”

Key said The Salvation Army requires all volunteers to wear a mask and gloves. They also sterilize the kettles, bells and aprons each morning for the volunteers to use during their shift.

The more bell ringers the Salvation Army has, the more their campaign will become a success and help more people within the community.

All the money raised from the Red Kettle Campaign goes directly to St. Joseph’s community and is used to give back to those in need.

“The mission, I know it is going to a good cause so this is not something new, it has been going on for 100 years,” said Dexter Noonan, volunteer and retired Salvation Army employee.

The campaign will run until Dec. 24 every day of the week, excluding Thanksgiving and Sundays.

Bell ringers can be found at more than eight different locations around St. Joseph including places like HyVee, Price Chopper and East Hills Mall.

Those interested in volunteering can call The Salvation Army at 816-232-5824 or go online to registertoring.com. 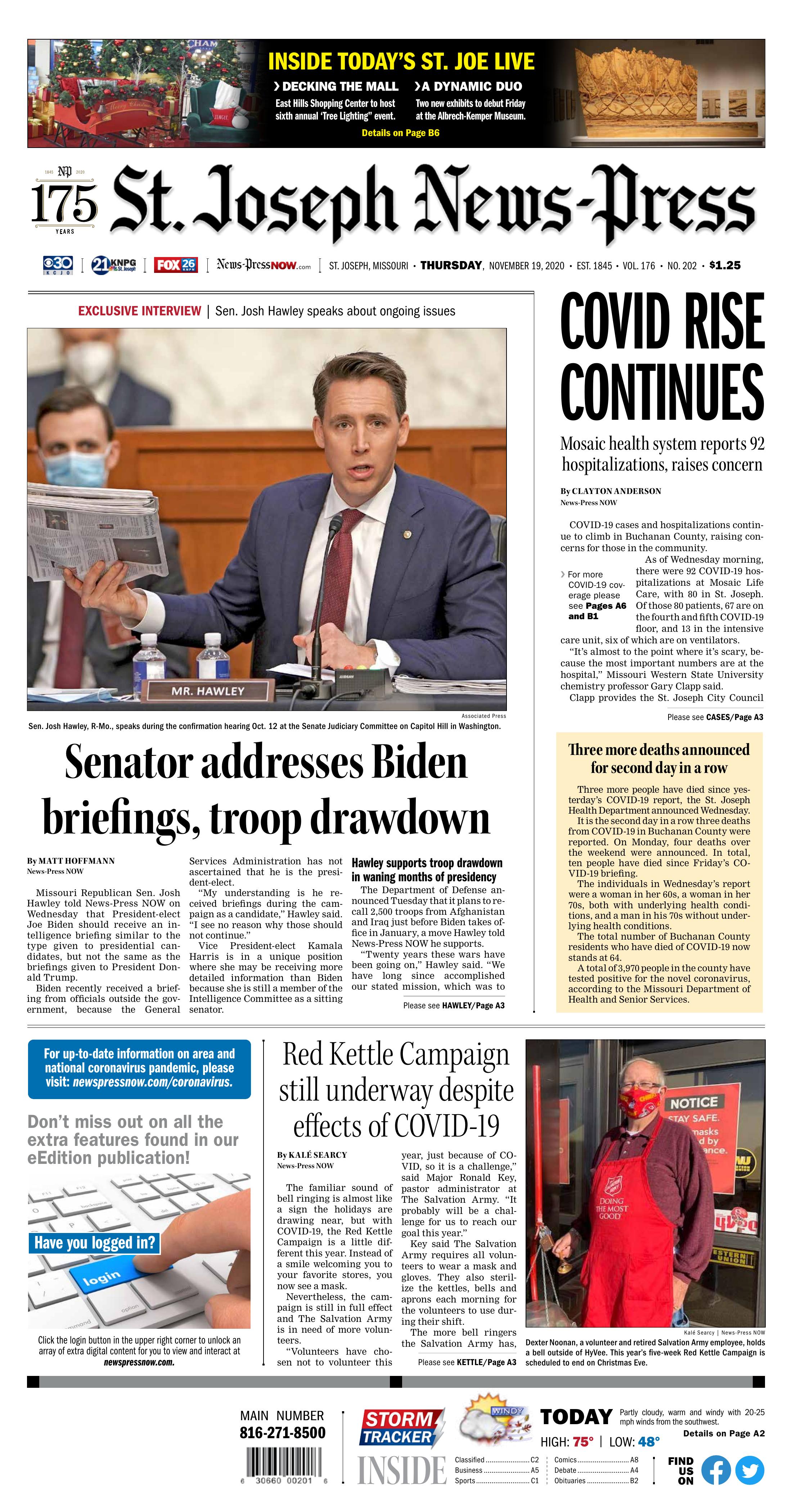