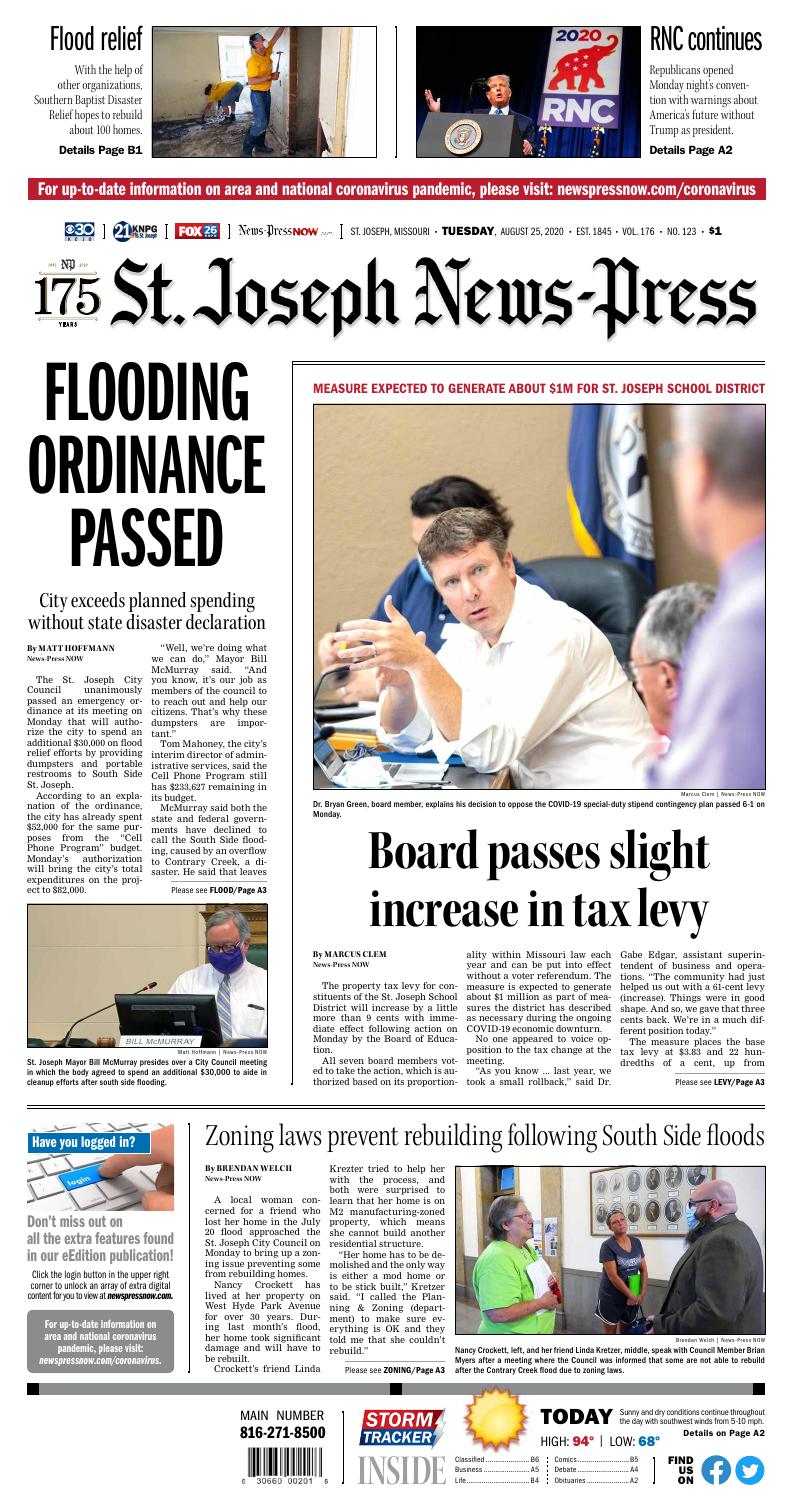 St. Joseph Mayor Bill McMurray presides over a City Council meeting in which the body agreed to spend an additional $30,000 to aide in cleanup efforts after south side flooding.

The St. Joseph City Council unanimously passed an emergency ordinance at its meeting on Monday that will authorize the city to spend an additional $30,000 on flood relief efforts by providing dumpsters and portable restrooms to South Side St. Joseph.

According to an explanation of the ordinance, the city has already spent $52,000 for the same purposes from the “Cell Phone Program” budget. Monday’s authorization will bring the city’s total expenditures on the project to $82,000.

“Well, we’re doing what we can do,” Mayor Bill McMurray said. “And you know, it’s our job as members of the council to to reach out and help our citizens. That’s why these dumpsters are important.”

Tom Mahoney, the city’s interim director of administrative services, said the Cell Phone Program still has $233,627 remaining in its budget.

McMurray said both the state and federal governments have declined to call the South Side flooding, caused by an overflow to Contrary Creek, a disaster. He said that leaves the city with limited options in terms of aide.

“And this just sounds unbelievable, but the official word from (the Missouri State Emergency Management Agency) is this is not a big enough disaster to warrant a declaration,” McMurray said. “I called up the governor’s office but (the incident) doesn’t meet the rules (for a disaster declaration).”

McMurray said the city has already spent approximately $60,000 on dumpsters for South Side while only appropriating $52,000.

“And, you know, certainly we’ve spent a lot of money we didn’t budget here in the city,” McMurray said. “Which we should spend.”

In a news release, the city noted that on top of the now $82,000 directly spent in aide of South Side, other work has been done to support residents. All told, Madison Davis, a city councilmember, said the city has spent almost $150,000 total from labor and tetanus clinics, alongside other efforts.

McMurray said some homeowners who live in “Zone C” may be eligible for funding from the United States Department of Housing and Urban Development. Those with questions are encouraged to call the mayor’s office at 816-271-4640.

Lute Atieh, left, vice president of the SJSD Board of Education, looks over documents on Monday evening at the district office. The board approved a tax levy increase of between 9 and 10 cents on Monday.

The property tax levy for constituents of the St. Joseph School District will increase by a little more than 9 cents with immediate effect following action on Monday by the Board of Education.

All seven board members voted to take the action, which is authorized based on its proportionality within Missouri law each year and can be put into effect without a voter referendum. The measure is expected to generate about $1 million as part of measures the district has described as necessary during the ongoing COVID-19 economic downturn.

No one appeared to voice opposition to the tax change at the meeting.

“As you know ... last year, we took a small rollback,” said Dr. Gabe Edgar, assistant superintendent of business and operations. “The community had just helped us out with a 61-cent levy (increase). Things were in good shape. And so, we gave that three cents back. We’re in a much different position today.”

The measure places the base tax levy at $3.83 and 22 hundredths of a cent, up from approximately $3.73. All figures apply for every $100 in assessed valuation of a given property, as determined by the Buchanan County government. For a residential property valued at $200,000, that means the property tax bill will increase by a little less than $38 per year.

Edgar has recommended the increase since its inception, but on Aug. 15, the district learned of catastrophic mold spore levels within Central High School that have manifested because of a combination of weather problems and issues with the school’s climate control system.

Although the district’s insurance carrier is expected to assume a portion of the cost, the board was prompted to authorize more than $700,000 in quoted repair costs by general contractor SERVPRO of St. Joseph. Edgar advised the board that, setting aside pending insurance payments, the exposure for the district likely exceeds $2 million, when all is said and done.

Edgar spoke of how he has found himself looking in the mirror in the morning, wondering if he is leading the district on the right course while tackling these challenges, but has ultimately resolved that this expense must be undertaken for the good of the students at Central. If the district needed to raise tax monies before, it definitely needs to now.

“With the situation going on at Central, it would not be in good order for me to tell you not to take that nine cents,” Edgar said.

In other business: The board approved, by a 6-1 vote, a contingency plan presented by Dr. Brian Kraus, human resources director, which authorizes the district to withhold “special duty stipend” payments from coaches and extracurricular program leaders this academic year, if their programs are shut down by COVID-19.

Dr. Bryan Green, board member, explained his no vote to his colleagues as a means of advocating for greater consideration for the affected staff. He said he respected the drive to be fiscally responsible.

“My concern is that, the implication is that we are paying them to be managers at practices and games. But I feel that the work that they do goes on throughout the year,” Green said. “(There are) many intangibles, and I think people have acknowledged that.”

Nancy Crockett, left, and her friend Linda Kretzer, middle, speak with Council Member Brian Myers after a meeting where the council was informed that some are not able to rebuild after the Contrary Creek flood due to zoning laws. On Tuesday, she was notified that her property will be allowed to have construction.

A local woman concerned for a friend who lost her home in the July 20 flood approached the St. Joseph City Council on Monday to bring up a zoning issue preventing some from rebuilding homes.

Nancy Crockett has lived at her property on West Hyde Park Avenue for over 30 years. During last month’s flood, her home took significant damage and will have to be rebuilt.

Crockett’s friend Linda Krezter tried to help her with the process, and both were surprised to learn that her home is on M2 manufacturing-zoned property, which means she cannot build another residential structure.

“Her home has to be demolished and the only way is either a mod home or to be stick built,” Kretzer said. “I called the Planning & Zoning (department) to make sure everything is OK and they told me that she couldn’t rebuild.”

Director of Planning & Community Development for the City Clint Thompson said the property is zoned that way due to its proximity to nearby railroad tracks.

He said this is a common occurrence in St. Joseph and, while homes may exist on the properties zoned for manufacturing, new structures cannot legally be built unless they fit that use.

He said the residential homes that exist in the area are consider “legal non-conforming use” and that properties that are vacant for two years transfer back to their original zoning.

He said the laws that are preventing Crockett from rebuilding exist to protect properties from illegal use.

“It exists in all location throughout St. Joe,” Thompson said. “The provision is there to try to protect that zoning district to eliminate illegal, non-conforming use from occurring.”

Kretzer said she has already been working with residents in the area and most were surprised to learn their homes were on property zoned for manufacturing.

“I took up a petition and I walked and went house to house and, out of I think 56 homes, three people knew,” Kretzer said. “That’s not a very good number.”

Many members of the City Council were also surprised to learn this news, and want to see the properties rezoned so that those who need to can rebuild.

Thompson said that process will consist of advertising with local media, informing residents, going before the Planning Commission and, ultimately, in front of the City Council for a final vote.

“It just takes time to send out notice to property owners and it’s all bound by what the state requires for rezoning,” Thompson said.

He said he wishes he could just write an ordinance and have the zoning changed, but it will likely take weeks.

Crockett said she hopes the process goes quickly. She is currently living in a camper with her four grandchildren. 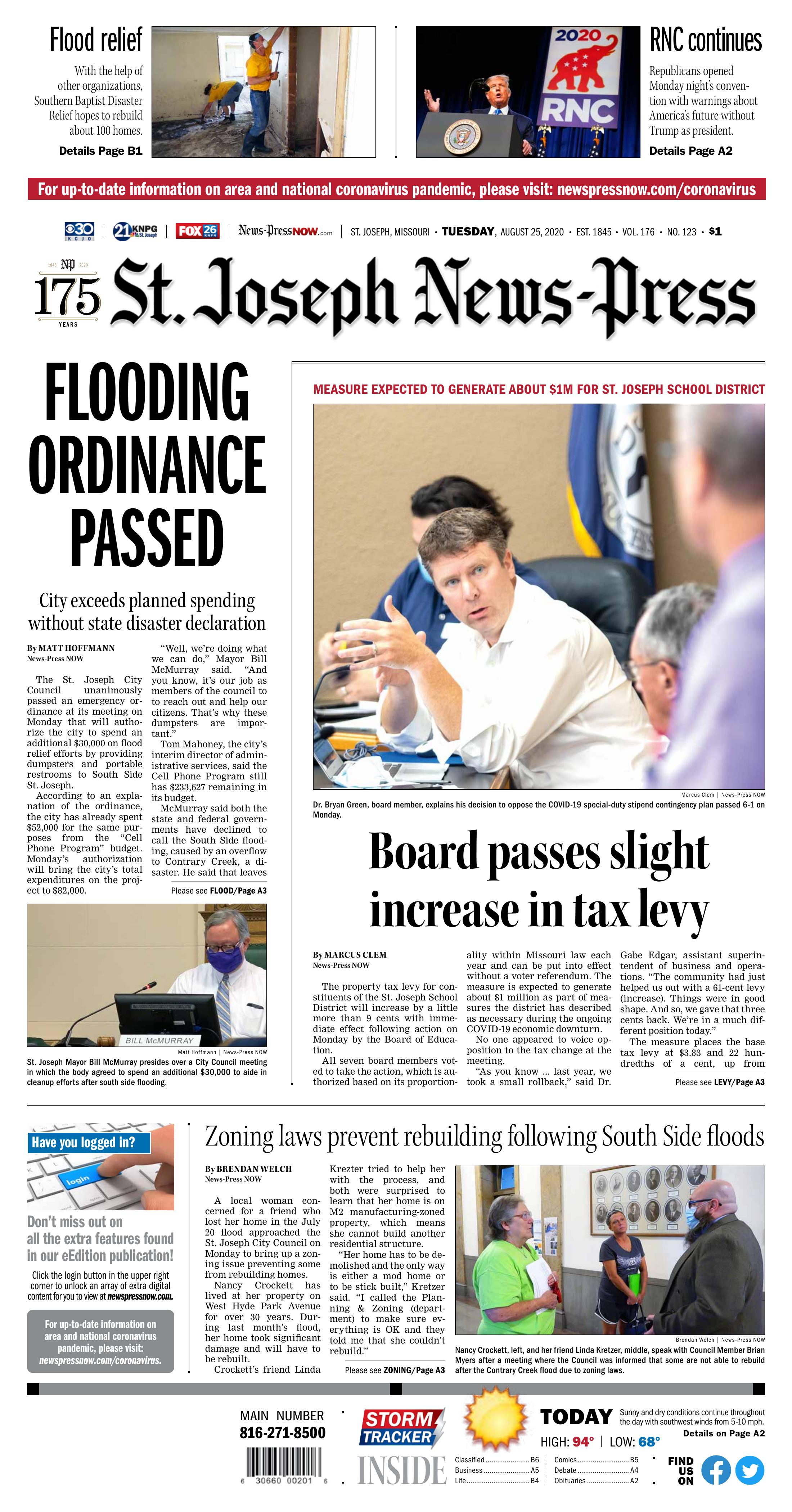