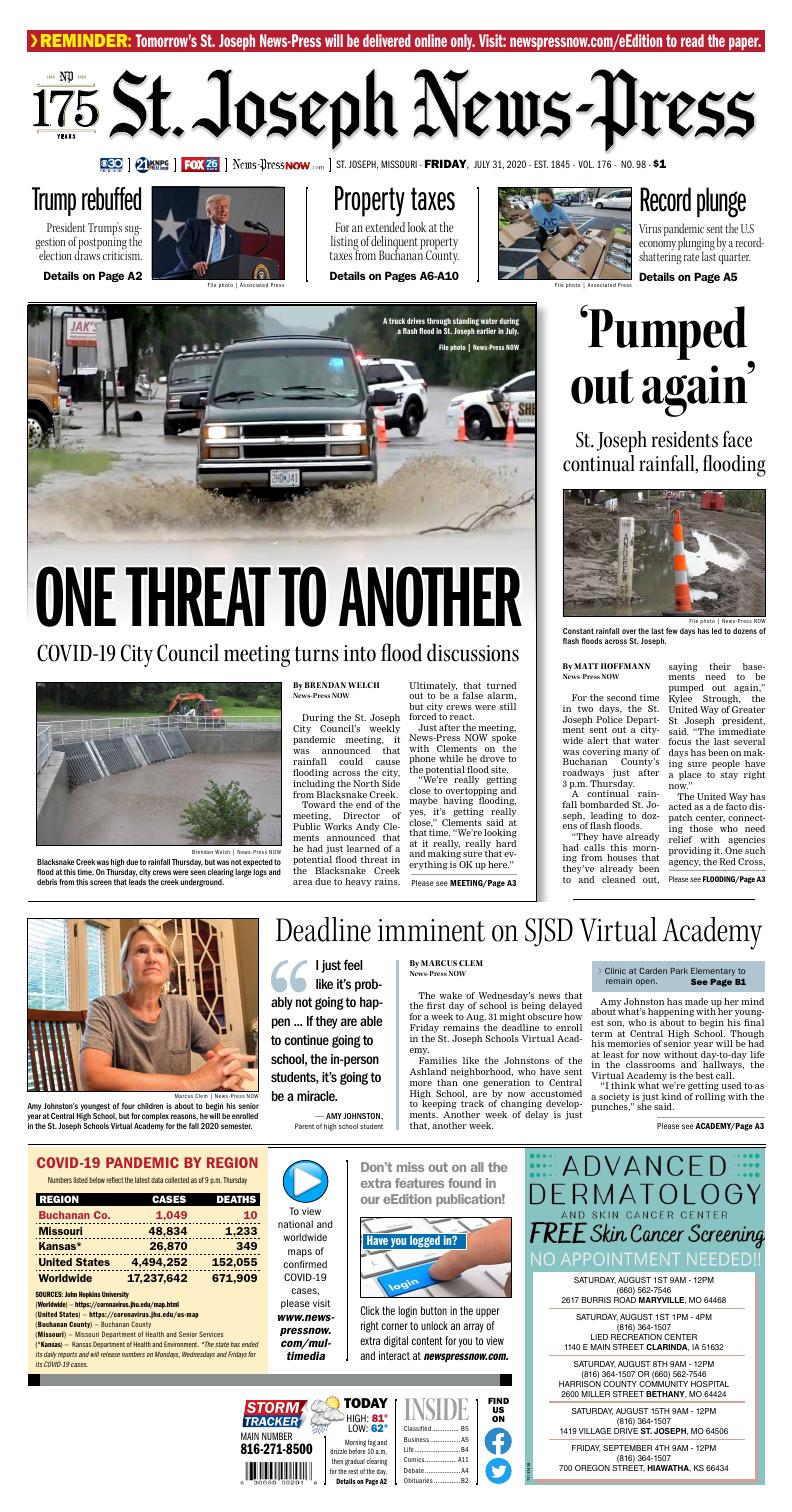 Blacksnake Creek was high due to rainfall Thursday, but was not expected to flood at this time. On Thursday, city crews were seen clearing large logs and debris from this screen that leads the creek underground.

During the St. Joseph City Council’s weekly pandemic meeting, it was announced that rainfall could cause flooding across the city, including the North Side from Blacksnake Creek.

Toward the end of the meeting, Director of Public Works Andy Clements announced that he had just learned of a potential flood threat in the Blacksnake Creek area due to heavy rains. Ultimately, that turned out to be a false alarm, but city crews were still forced to react.

Just after the meeting, News-Press NOW spoke with Clements on the phone while he drove to the potential flood site.

“We’re really getting close to overtopping and maybe having flooding, yes, it’s getting really close,” Clements said at that time. “We’re looking at it really, really hard and making sure that everything is OK up here.”

City crews could be seen using a backhoe to pull logs off of a screen where the open creek goes underground near the ballfields off of Karnes Road. The water level was high, but did not breach the creek bed.

Clements said he and his crews were preparing for a “long night,” but early reports that suggested imminent flooding were inaccurate.

“The good news is the initial reports of it being close to going over, thankfully, were incorrect and it looks like we’re in good shape so far,” Clements said. “Right now, at this time, we’re good and safe.”

He said a major “cloud burst” could possibly change the situation, but flooding was not expected to happen on Thursday night.

Some, including Mayor Bill McMurray were concerned about how the situation could be so serious when the new Blacksnake tunnel has been completed. Clements said the tunnel is not a flood control system, though a detention basin that would prevent flooding in the area was considered and, ultimately, voted down by the former City Council in 2016.

A representative from The United Way spoke with the council on Thursday and said current rainfall is causing people affected by the Contrary Creek flood on the city’s South Side to be re-impacted as water has nowhere to go with drainage systems plugged or full.

During the weekly COVID-19 pandemic work session, the City Council saw data from Professor Gary Clapp of Missouri Western State University, which suggests a downward trend in new virus cases when looking at the 14-day average. Clapp said the city is averaging about five new cases per day and is holding steady at that number aside from a few small spikes.

The council decided not to make any changes to the current mask order, which requires face coverings to be worn in any retail store of 10,000 square feet or more.

A truck drives through standing water during a flash flood in St. Joseph earlier in July.

For the second time in two days, the St. Joseph Police Department sent out a citywide alert that water was covering many of Buchanan County’s roadways just after 3 p.m. Thursday.

“They have already had calls this morning from houses that they’ve already been to and cleaned out, saying their basements need to be pumped out again,” Kylee Strough, the United Way of Greater St Joseph president, said. “The immediate focus the last several days has been on making sure people have a place to stay right now.”

The United Way has acted as a de facto dispatch center, connecting those who need relief with agencies providing it. One such agency, the Red Cross, has conducted hundreds of damage assessments.

“And I think we know that probably around 250 to 300 assessments have been done just on homes, so some sort of damage,” Chris Harmon, the Red Cross’ regional disaster officer, said. “The big deal with this one was that (the area) was inaccessible for a little while, so that delayed it just a little bit.”

Harmon said the Red Cross has worked with approximately 90 families during the flash floods, which have lasted about 10 days.

“And there’s more out there that we know we need to touch,” he said. “Probably another 50 or so. And during this time it’s kind of hard when folks do scatter.”

Because of COVID-19, Harmon said you won’t see the traditional images of Red Cross members donning jackets blanketing the disaster area. Instead, Harmon said the organization is reaching out to impacted persons by phone.

“I think that the St. Joe community really came together to help those impacted and it was amazing to watch and it’s amazing to be part of,” Harmon said.

Those in need of relief services can contact the United Way at 816-364-2381. Strough said a live person is available 24/7 to connect the public with resources.

Amy Johnston’s youngest of four children is about to begin his senior year at Central High School, but for complex reasons, he will be enrolled in the St. Joseph Schools Virtual Academy for the fall 2020 semester.

The deadline to choose between in-person education at facilities like Central High School, and the Virtual Academy, arrives on Friday.

Ashley Stanton, a leader among the local branch of the Missouri State Teachers Association, conducts special education courses at Central High School. More than most, she says, teachers have a duty to be a reassuring force in a crisis.

The wake of Wednesday’s news that the first day of school is being delayed for a week to Aug. 31 might obscure how Friday remains the deadline to enroll in the St. Joseph Schools Virtual Academy.

Families like the Johnstons of the Ashland neighborhood, who have sent more than one generation to Central High School, are by now accustomed to keeping track of changing developments. Another week of delay is just that, another week.

Amy Johnston has made up her mind about what’s happening with her youngest son, who is about to begin his final term at Central High School. Though his memories of senior year will be had at least for now without day-to-day life in the classrooms and hallways, the Virtual Academy is the best call.

“I think what we’re getting used to as a society is just kind of rolling with the punches,” she said.

Avoiding infection by COVID-19 is not Johnson’s motivation in her decision. Things have just developed to the point where if a structure for her child’s education can be assured, regardless of how the public health situation changes, that’s the best choice.

She estimates that it will not be possible to complete the semester with in-person classes. She is hopeful that her son will remain able to play basketball for Central this winter. It has been assured that there will be no hindrance on his eligibility as a Virtual Academy student.

“I just feel like it’s very likely that’s probably not going to happen,” Johnston said. “I feel like if they are able to continue going to school, the in-person students, it’s going to be a miracle.”

Ashley Stanton, a leader within the local branch of the Missouri State Teachers Association and who conducts special education courses at Central, recognizes that a lot of families may be looking for guidance during the COVID crisis.

If Johnson’s prediction is right, and the district must close its buildings later this year, those who go for the in-person option will be put into the Remote Learning system, billed as an improvement on what students used this past spring when the pandemic first struck, but a fallback nonetheless. Remote Learning also will be used in the event of non-COVID closure, like a snow day.

“The whole restructuring of everything is such a massive project,” Johnston said. “To try to think of everything and to try to make an acceptable plan is really impossible if you want to make everyone happy. I just fall back on how the people who are making those decisions are doing the best they can.” 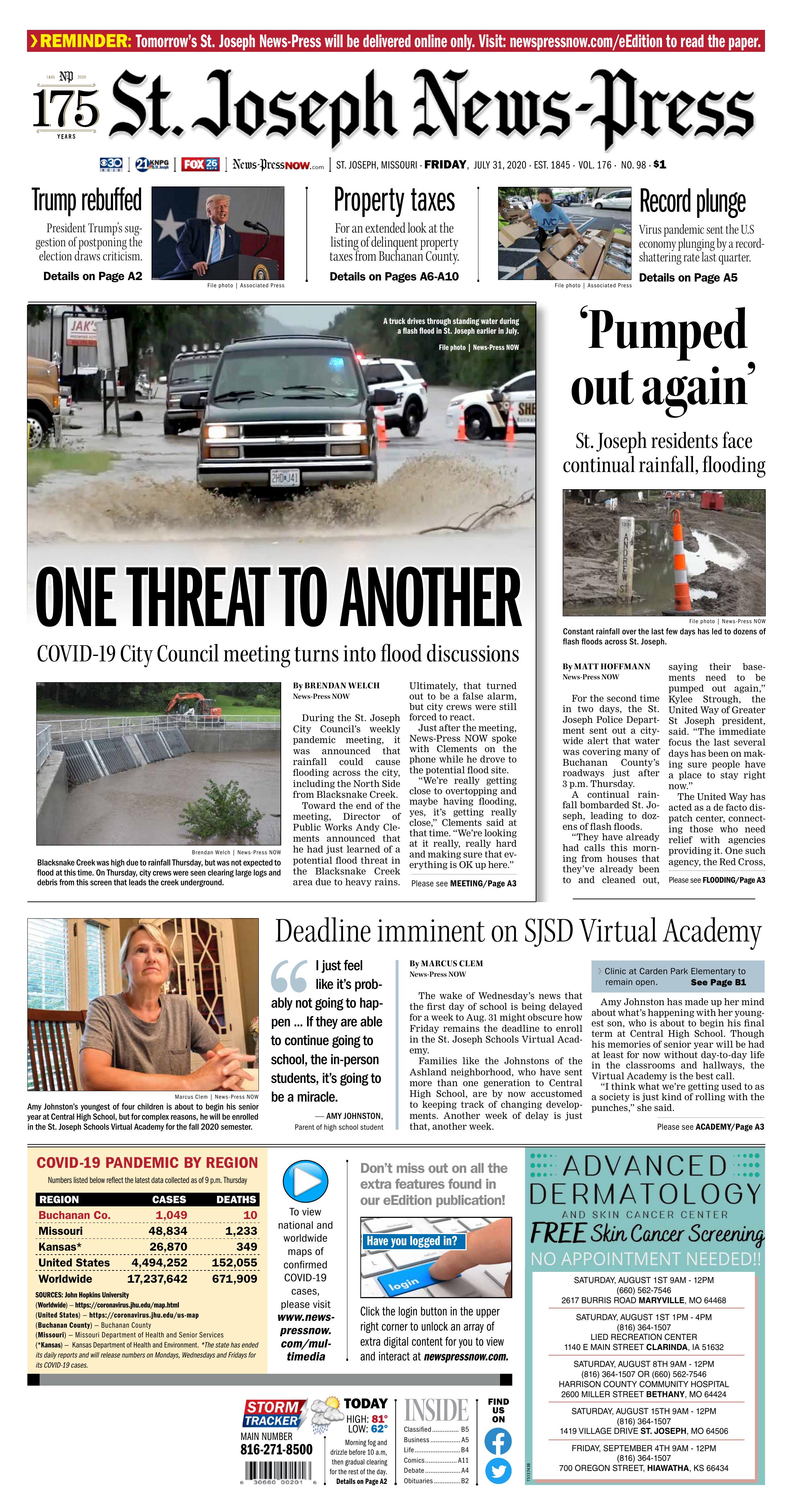