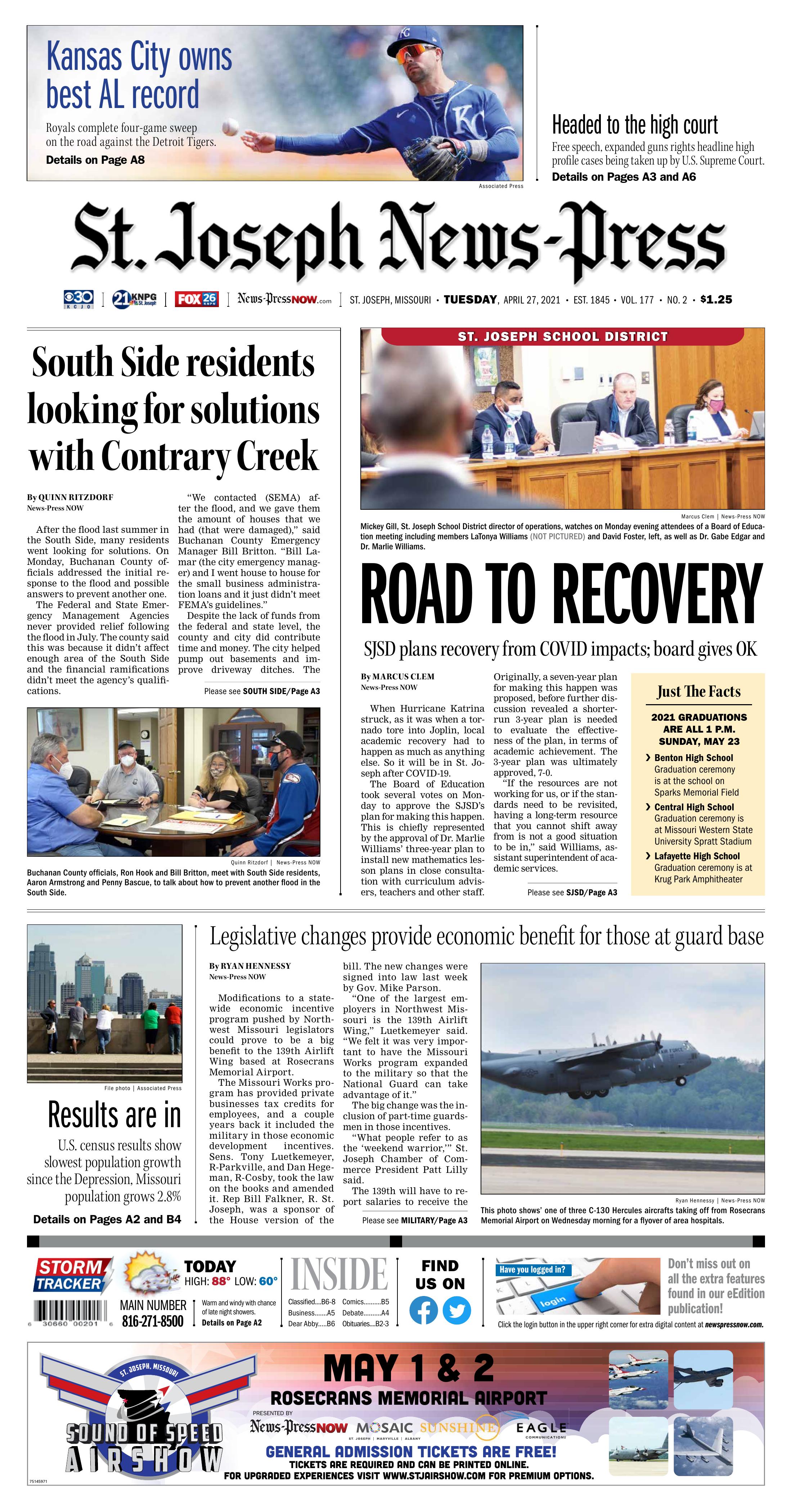 Mickey Gill, St. Joseph School District director of operations, watches on Monday evening attendees of a Board of Education meeting including members LaTonya Williams (NOT PICTURED) and David Foster, left, as well as Dr. Gabe Edgar and Dr. Marlie Williams.

When Hurricane Katrina struck, as it was when a tornado tore into Joplin, local academic recovery had to happen as much as anything else. So it will be in St. Joseph after COVID-19.

The Board of Education took several votes on Monday to approve the SJSD’s plan for making this happen. This is chiefly represented by the approval of Dr. Marlie Williams’ three-year plan to install new mathematics lesson plans in close consultation with curriculum advisers, teachers and other staff. Originally, a seven-year plan for making this happen was proposed, before further discussion revealed a shorter-run 3-year plan is needed to evaluate the effectiveness of the plan, in terms of academic achievement. The 3-year plan was ultimately approved, 7-0.

“If the resources are not working for us, or if the standards need to be revisited, having a long-term resource that you cannot shift away from is not a good situation to be in,” said Williams, assistant superintendent of academic services.

The extent to which teachers will have to apply the new curriculum in order to bring students up to standards will be determined over time.

As things stand, survey data presented by Williams and Dr. Kendra Lau, director of assessment and evaluation, indicates local students are about 1% below comparison school districts nationwide in mathematics. The same data, however, shows they are performing at a 5% better level in reading. There are other indications that the situation is not as bad as it might have been, considering how students went through much of the spring 2020 semester with essentially no form of education happening as planned.

“Some of the preliminary data is certainly suggesting that we have closed gaps, certainly in reading, even though reading was not as impacted by gaps,” Lau told the board. “But we are not in the place where, at a national level, the gaps are being seen in mathematics.”

The board approved Lau’s assessment plan, 6-1, with new board member Kenneth Reeder dissenting. Reeder attended his first regularly scheduled board meeting on Monday, alongside fellow newcomers David Foster and LaTonya Williams. They will serve for at least the next year with Board President Tami Pasley and Board Vice President Dr. Bryan Green steering the agenda.

Buchanan County officials, Ron Hook and Bill Britton, meet with South Side residents, Aaron Armstrong and Penny Bascue, to talk about how to prevent another flood in the South Side.

After the flood last summer in the South Side, many residents went looking for solutions. On Monday, Buchanan County officials addressed the initial response to the flood and possible answers to prevent another one.

The Federal and State Emergency Management Agencies never provided relief following the flood in July. The county said this was because it didn’t affect enough area of the South Side and the financial ramifications didn’t meet the agency’s qualifications.

“We contacted (SEMA) after the flood, and we gave them the amount of houses that we had (that were damaged),” said Buchanan County Emergency Manager Bill Britton. “Bill Lamar (the city emergency manager) and I went house to house for the small business administration loans and it just didn’t meet FEMA’s guidelines.”

Despite the lack of funds from the federal and state level, the county and city did contribute time and money. The city helped pump out basements and improve driveway ditches. The county helped clear debris from Contrary Creek, and both provided dumpsters.

Yet many residents are still displaced and have significant financial damage to their homes. Some South Siders feel as if they are on their own and have taken matters into their own hands.

Aaron Armstrong, a South Side resident, contacted the Missouri Department of Natural Resources to see if the organization could help clear Contrary Creek. The department said it didn’t have the funds to help but provided “No Dumping” signs to be placed along the banks.

“We did bring down some signs that were given to us by the Missouri Department of Natural Resources and those are going to be posted along the creek,” Armstrong said. “We actually have a date set for Ron Hook to join us in going out and putting those signs up along the creek.”

Armstrong also reached out to the United States Army Corps of Engineers to discuss control burns in the creek to clear downed trees and limbs. The Corp said burns in creek beds are prohibited because it contaminates the waterway.

During his meeting with Britton and Ron Hook, the western district Buchanan County commissioner, Armstrong brought up building a levy on the creek. While this is possible, it is a major process. Funding a levy is expensive and usually requires taxation and the formation of a review board.

The most likely solution to come from the meeting is the creation of a committee. Hook and Britton agreed to be a part of a group with other state, city and county officials to continue discussions around solutions to prevent another South Side flood.

“It’s a very good sign that we’ve all agreed to form some sort of committee, get our agencies involved and meet together,” Armstrong said, “where we can come up with a plan that’s going to be less costly and beneficial to residents of south St. Joseph.”

Modifications to a statewide economic incentive program pushed by Northwest Missouri legislators could prove to be a big benefit to the 139th Airlift Wing based at Rosecrans Memorial Airport.

The Missouri Works program has provided private businesses tax credits for employees, and a couple years back it included the military in those economic development incentives. Sens. Tony Luetkemeyer, R-Parkville, and Dan Hegeman, R-Cosby, took the law on the books and amended it. Rep Bill Falkner, R. St. Joseph, was a sponsor of the House version of the bill. The new changes were signed into law last week by Gov. Mike Parson.

“One of the largest employers in Northwest Missouri is the 139th Airlift Wing,” Luetkemeyer said. “We felt it was very important to have the Missouri Works program expanded to the military so that the National Guard can take advantage of it.”

The big change was the inclusion of part-time guardsmen in those incentives.

The 139th will have to report salaries to receive the tax credits, and the incentive typically lasts a few years.

Rosecrans had been considered for an aeromedical evacuation squadron. However, in February Fort Worth’s 136th Airlift Wing was awarded that squadron.

Even though that door has shut, Rosecrans could get another chance at a new military unit.

“We hope to sweeten our bid for that with this Senate Bill 2 piece of legislation,” Hegeman said.

Rosecrans is not just a military base, it is also part civilian. The growth of the military could be good for the civilian side as well, according to Rosecrans General Manager Abe Forney.

“Anything that improves workforce development out at the airport and with our community is good,” Forney said.