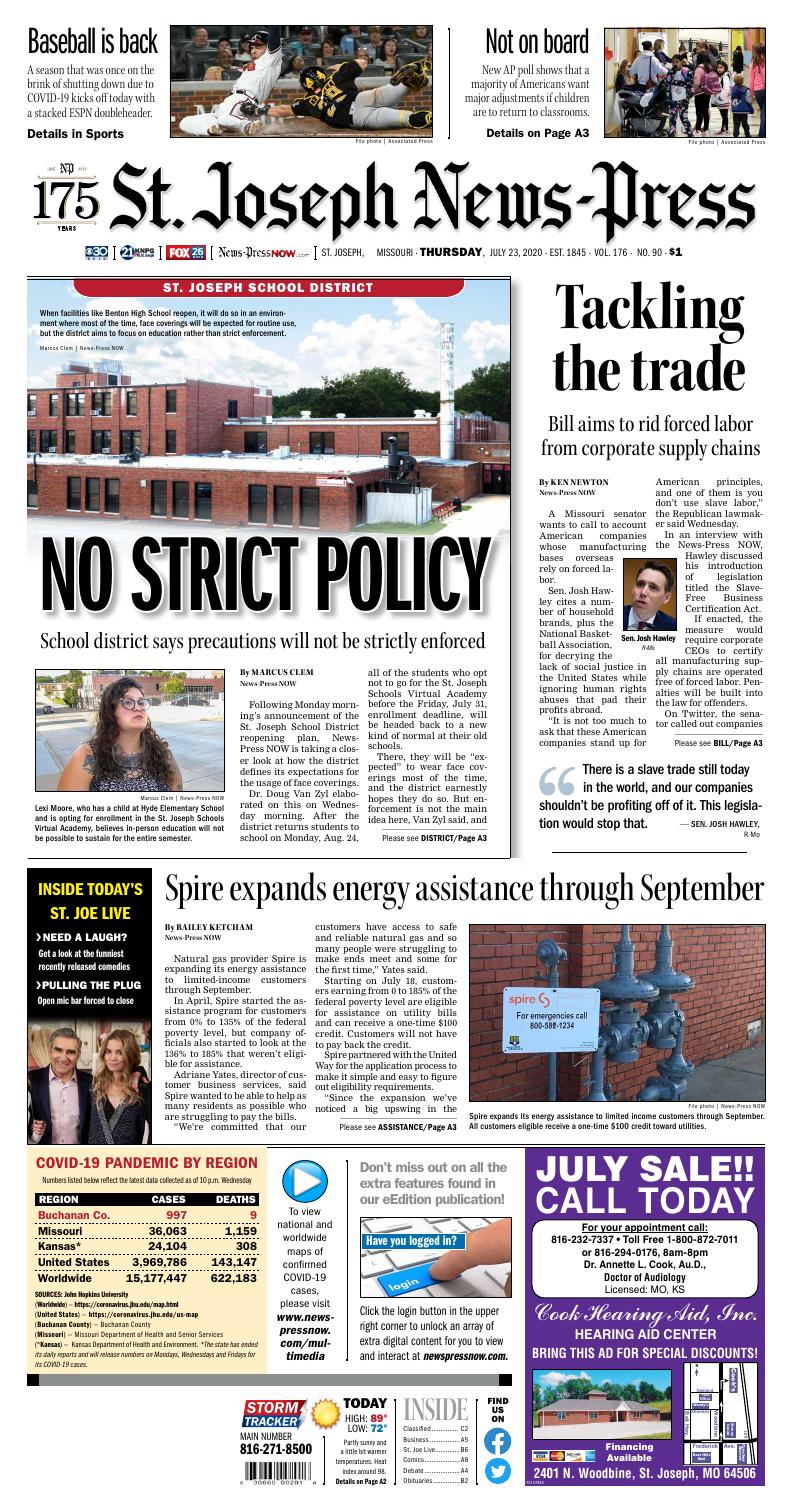 When facilities like Benton High School reopen, it will do so in an environment where most of the time, face coverings will be expected for routine use, but the district aims to focus on education rather than strict enforcement.

Lexi Moore, who has a child at Hyde Elementary School and is opting for enrollment in the St. Joseph Schools Virtual Academy, believes in-person education will not be possible to sustain for the entire semester.

Following Monday morning’s announcement of the St. Joseph School District reopening plan, News-Press NOW is taking a closer look at how the district defines its expectations for the usage of face coverings.

Dr. Doug Van Zyl elaborated on this on Wednesday morning. After the district returns students to school on Monday, Aug. 24, all of the students who opt not to go for the St. Joseph Schools Virtual Academy before the Friday, July 31, enrollment deadline, will be headed back to a new kind of normal at their old schools.

There, they will be “expected” to wear face coverings most of the time, and the district hopes they do so. But enforcement is not the main idea here, Van Zyl said, and there will be situations, inside school buildings and outside at times like recess, where masks won’t be mandatory. The plan is expected to change over time.

Van Zyl explained the difference between a mask requirement and the district’s current expectations.

“A 'requirement' is, it’s guaranteed, no matter where you are, it has to be on,” he said. “An 'expectation' is, depending on the situation or the scenario, it’s going to be expected to take place. It doesn’t necessarily mean all day, every day ... I don’t necessarily see them having to wear masks while they’re outside at recess.”

Hyde Elementary mother Lexi Moore said she’s convinced that is not going to work. She has faith that district leaders have done the best they can given a nigh-impossible situation, but at the end of the day, keeping schools open in a safe manner will not be possible.

She fears that the drive to hold in-person class sessions could produce avoidable cases, some of which may result in serious complications, perhaps even deaths.

“Come probably flu season, (a new shutdown) is gonna happen,” she said. “And, there’s no way around it. We’re gonna lose people. It’s, it’s built into the system. It has to be.”

The St. Joseph chapter of the National Education Association is waiting to see how this all works out.

Teachers are eager to teach. But as a round-the-clock “masks on” strictly enforced requirement would make everyone safer, chapter president J. Eric Simmons said, that’s what is needed. About 71 percent of educators and school staff recently surveyed by the Missouri NEA, Simmons said, report they are in favor of a strict face covering rule.

“There’s always going to be the chance that our staff and our students are going to fall ill with this awful disease,” Simmons said. “And we have grave concerns about that.”

Barbara Halter, mother to a Central High School daughter, is joining Moore in sticking with online-only education this fall via the Virtual Academy. The reason is simple: Even with face coverings, the risk of infection is too high as COVID-19 cases are increasing in the region.

“So, if they’re all in a classroom, but they can sit so far away from each other, maybe they’ll not be required to wear a mask, but I would still think that this is, like, an airborne disease,” she said. “I don’t see how that’s going to work.”

"I do not feel that there has been the transparency and open dialogue with the community that other districts are having, that should have happened for us to be discussing the opening of schools safely," Halter said.

Van Zyl said the district is relying first and foremost on public health experts to determine the best course.

"We'll be following the guidance from the CDC and the health department," he said. "My understanding is, and I'm not a medical professional, is that if (kids) are in situations for 15 minutes where they can't social distance, those would be times you'd be taking a look at having masks."

Missouri Sen. Josh Hawley talks Wednesday about his legislation that intends to rid forced labor from the supply chain of American companies with manufacturing overseas.

Sen. Josh Hawley cites a number of household brands, plus the National Basketball Association, for decrying the lack of social justice in the United States while ignoring human rights abuses that pad their profits abroad.

“It is not too much to ask that these American companies stand up for American principles, and one of them is you don’t use slave labor,” the Republican lawmaker said Wednesday.

In an interview with the News-Press NOW, Hawley discussed his introduction of legislation titled the Slave-Free Business Certification Act.

If enacted, the measure would require corporate CEOs to certify all manufacturing supply chains are operated free of forced labor. Penalties will be built into the law for offenders.

On Twitter, the senator called out companies like Nike and Apple, plus NBA star LeBron James, to take the pledge to reject corporate dealings that have the slave trade as their foundation.

Hawley has become a leading voice in the criticism of China for its aggression in the Pacific Rim and globally. Congress has this year become increasingly unsettled by China’s oppression of the mostly Muslim Uighur population in the northwestern part of that country, those residents often forced into state-run labor camps.

Last month, in its annual “Trafficking in Persons” report, the U.S. State Department highlighted China’s widespread use of forced labor, with those detained in camps estimated as at least 1 million Muslims.

The senator’s office noted that at least 80 international companies have been linked to the Uighur slaves.

Spire expands its energy assistance to limited income customers through September. All customers eligible receive a one time $100 credit towards utilities.

In April, Spire started the assistance program for customers from 0% to 135% of the federal poverty level, but company officials also started to look at the 136% to 185% that weren’t eligible for assistance.

Adriane Yates, director of customer business services, said Spire wanted to be able to help as many residents as possible who are struggling to pay the bills.

“We’re committed that our customers have access to safe and reliable natural gas and so many people were struggling to make ends meet and some for the first time,” Yates said.

Starting on July 18, customers earning from 0 to 185% of the federal poverty level are eligible for assistance on utility bills and can receive a one-time $100 credit. Customers will not have to pay back the credit.

Spire partnered with the United Way for the application process to make it simple and easy to figure out eligibility requirements.

“Since the expansion we’ve noticed a big upswing in the applications, which is great, and we encourage anyone who applied a month ago and got declined to apply again because of the changes,” Yates said.

Spire has funds available to help thousands of customers in Missouri. More than 2,000 customers have applied since the expansion of the program, and Yates hoped thousands more could be helped in the next several weeks.

“It was a little surprising at first with the influx in applications of just how many people in our communities were struggling to make ends meet,” Yates said.

At the end of September, Yates said Spire will take another look at the program and figure out what more it can to help Missouri residents.

“I do think we’ll exhaust our funds or get really close by the end of September, which is great because that’s what we want to do, and we’ll take a look at other options,” Yates said.

To apply for Spire energy assistance, go to www.spireenergy.com/relief.