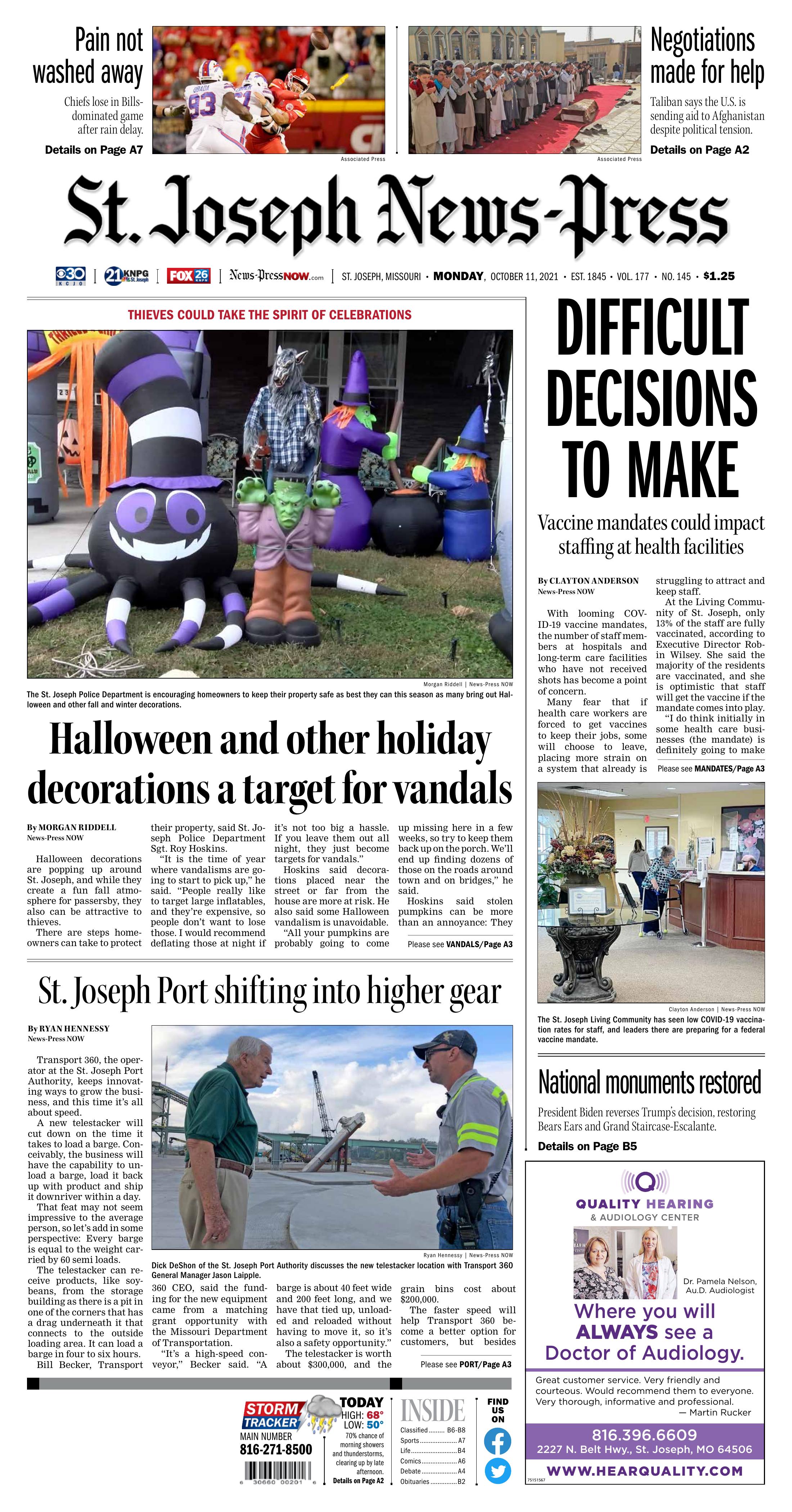 The St. Joseph Police Department is encouraging homeowners to keep their property safe as best they can this season as many bring out Halloween and other fall and winter decorations.

Halloween decorations are popping up around St. Joseph, and while they create a fun fall atmosphere for passersby, they also can be attractive to thieves.

“It is the time of year where vandalisms are going to start to pick up,” he said. “People really like to target large inflatables, and they’re expensive, so people don’t want to lose those. I would recommend deflating those at night if it’s not too big a hassle. If you leave them out all night, they just become targets for vandals.”

Hoskins said decorations placed near the street or far from the house are more at risk. He also said some Halloween vandalism is unavoidable.

“All your pumpkins are probably going to come up missing here in a few weeks, so try to keep them back up on the porch. We’ll end up finding dozens of those on the roads around town and on bridges,” he said.

Hoskins said stolen pumpkins can be more than an annoyance: They also can be a hazard for drivers.

“That’s something else to keep in mind driving on the highway under a bridge, under an overpass,” he said. “Sometimes people throw those off and aren’t aware of what’s driving underneath them.”

Some may consider using security cameras to keep an eye on holiday decor, but it’s important not to take away from home safety, Hoskins said.

“You want to keep your cameras on your door. But if you can, if you have a multi-camera setup, something like that, aim it towards your decorations, your property,” he said. “We certainly don’t recommend that people engage or confront someone if they are stealing or vandalizing property. It’s definitely not worth getting hurt over.”

Stealing yard decorations may seem like a simple joke to teens, but it’s important to remember those actions are illegal and can have real implications.

“If you’re a juvenile, you could end up with a juvenile record, and if there is damage, your parents can actually be held financially responsible for the damages,” Hoskins said.

Hoskins encourages victims of theft to report it to the police.

The St. Joseph Living Community has seen low COVID-19 vaccination rates for staff, and leaders there are preparing for a federal vaccine mandate.

With looming COVID-19 vaccine mandates, the number of staff members at hospitals and long-term care facilities who have not received shots has become a point of concern.

Many fear that if health care workers are forced to get vaccines to keep their jobs, some will choose to leave, placing more strain on a system that already is struggling to attract and keep staff.

At the Living Community of St. Joseph, only 13% of the staff are fully vaccinated, according to Executive Director Robin Wilsey. She said the majority of the residents are vaccinated, and she is optimistic that staff will get the vaccine if the mandate comes into play.

“I do think initially in some health care businesses (the mandate) is definitely going to make an impact,” Wilsey said. “But I think if everyone is doing it, then the options of where you are going to go (for a job) become very few.”

The Living Community has had COVID-19 screening for visitors, and Wilsey said staff vaccination would be another step in limiting the potential spread of an outbreak. She said most residents at her facility received the Moderna vaccine, so they are awaiting guidelines regarding the booster for that shot.

While some hospitals already have started imposing mandates, the Living Community of St. Joseph is awaiting federal guidelines before moving forward, Wilsey said.

“We’re not really sure how that’s going to all play out, but I feel like our company is preparing for that, and as a group, we’ll be ready,” Wilsey said.

Mosaic Life Care has about 70% of its caretakers vaccinated, according to Chief Medical Officer Dr. Davin Turner. Hospital leaders have announced employees will be required to be vaccinated against COVID-19, but he said officials there also are awaiting federal guidelines before going through the exemption process and letting people who don’t comply go.

“We felt compelled. We had several caregiver meetings where they had an opportunity to voice their opinions in regards to this, and we feel strongly that we want to see what (Centers for Medicare & Medicaid Services) is recommending,” Turner said.

Turner said he is watching how Mosaic’s caregivers are responding to the mandate and is aware that there is a national nursing shortage as well as an overall scarcity of health care workers.

“We are very vigilant on that, working on multiple strategies to retain our caregivers, to make sure they know how much we value them,” Turner said. “But certainly this is a worry.”

Transport 360, the operator at the St. Joseph Port Authority, keeps innovating ways to grow the business, and this time it’s all about speed.

A new telestacker will cut down on the time it takes to load a barge. Conceivably, the business will have the capability to unload a barge, load it back up with product and ship it downriver within a day.

That feat may not seem impressive to the average person, so let’s add in some perspective: Every barge is equal to the weight carried by 60 semi loads.

The telestacker can receive products, like soybeans, from the storage building as there is a pit in one of the corners that has a drag underneath it that connects to the outside loading area. It can load a barge in four to six hours.

Bill Becker, Transport 360 CEO, said the funding for the new equipment came from a matching grant opportunity with the Missouri Department of Transportation.

“It’s a high-speed conveyor,” Becker said. “A barge is about 40 feet wide and 200 feet long, and we have that tied up, unloaded and reloaded without having to move it, so it’s also a safety opportunity.”

The faster speed will help Transport 360 become a better option for customers, but besides being more competitive, barges also have a smaller carbon footprint than trains or trucks.

Dick DeShon, a member of the Port Authority’s board, has witnessed how Transport 360 has improved barge traffic despite flooding in 2019 and the complications brought on by the COVID-19 pandemic.

“They continuously work on trying to reduce the cost, not only their cost, but the cost to the customer,” DeShon said.

Jason Laipple is the general manager at Transport 360. He said it takes three to four people to run the facility efficiently.

“The big thing is having the product here to load when the market is at the right price. That’s huge to get it down to St. Louis and then down to the Gulf,” Laipple said. “(The telestacker) will allow us to definitely meet customer demands more efficiently.”