Dr. Gabe Edgar, assistant superintendent of business and operations, speaks Tuesday to the Board of Education during a special meeting at the district office.

Education leaders expect to sell just under $10 million in debt, ultimately backed by the federal government, to in part upgrade the three local high schools.

St. Joseph School District leaders explained on Tuesday that although the plan is structured like a 10-year bond issue — with a fixed 2.5% interest rate and a debt service plan that features payments in the range of $1.1 million to $1.3 million every six months — it is, as Dr. Doug Van Zyl said, “not a bond,” and no election will be required to authorize this plan. No matter what, taxes are not expected to shift as a consequence of what the district is doing. If everything conceivable goes wrong, the district’s budget will absorb a $9.6 million shortfall.

“It’s ... dollars that we’re getting from the federal government that have to be used toward air quality, air conditioning, that sort of thing,” the superintendent of schools said. “So, that’s where those dollars come from.”

The money would pay for work that will be led by Schneider Electric to fix infrastructure at the district’s three high schools and Hillyard Technical Center. A feature of this work is to install air conditioning in large spaces and update the tech center’s system.

But not everyone agrees with the plan as presented. Board of Education member Kenneth Reeder, who serves as chairman of the SJSD Finance Committee, voted “No” on the underlying plan in May and abstained Tuesday on authorizing this debt-certificate issue. It passed 6-0-1 in a special meeting of the full school board. At any rate, federal dollars first passed to relieve damage caused by COVID-19 are expected to come down the pike and pay all of the debt off on or before April 2023.

Under the 10-year contingency plan, SJSD is forecast to owe just under $11.14 million over the next 10 years. However, CEO Larry Hart said, the second tranche of Elementary and Secondary School Emergency Relief dollars will allow for the certificates to be paid off by April of 2023.

“Just for the newly elected board members to know, we are required to operate as a fiduciary for the district,” Hart said. “That means we have to offer a proposal that we believe is in your best financial interests, that’s how we are regulated, and this plan is a prime example of that.”

The 10-year debt service plan is merely a contingency and the risk of it being needed is low, he said. The emergency relief dollars are enabled by the various stages of U.S. emergency COVID-19 relief funding, the most recent stage of which was passed in March and signed into law by President Joe Biden.

City councilman Madison Davis, middle, disagreed with councilmembers Brenda Blessing and Russell Moore on how to form the new districts.

The first proposal for the council redistricting.

City staff presented three proposals for council redistricting during a work session Tuesday, but the council was split on which proposal they preferred.

The proposals were based on estimates from the American Community Survey, as the latest Census information was not available. Two options broke the city up in four quadrants, while the other one created districts around the core of Downtown.

The goal of the city is to make the population in each district as even as possible, but this is easier said than done. Staff are using census block group information but some of those blocks are both inside and outside city limits, creating complications.

“We have to just take the best numbers we have and make the fairest number of districts population wise,” said Mayor Bill McMurray. “That’s been my criterion all along. I said to the city manager, ‘Let’s even up the population as much as we can in the four districts.’”

The districts will decrease from five to four, creating four at-large members and four district members. City staff wants the districts approved by July, so those running for election next spring know their district boundaries.

Councilmembers Madison Davis and Marty Novak, along with McMurray, preferred the third proposal — the one with districts created around the core of Downtown. They said this proposal had the most equal population between each district. 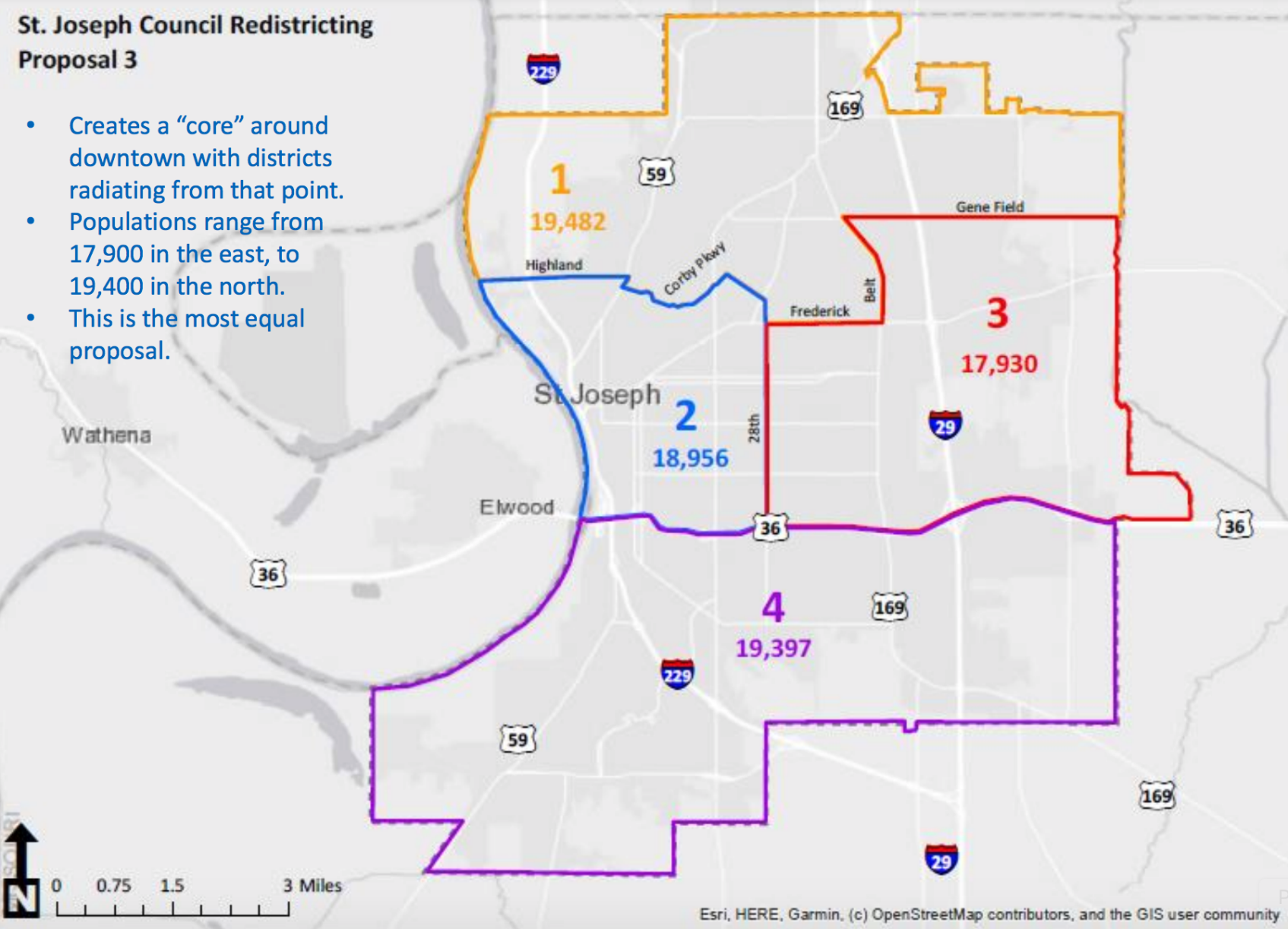 The third proposal for the council redistricting.

“My initial thought was that we’d have four quadrants, a pretty close to being equal population,” McMurray said. “But then because we have all the different census tracts, and the population is not equally distributed across the city, that’s the reason we have to make some adjustments on this. The one that’s most equal is number three, so that’s why I support it.”

But councilmembers Kent O’Dell, Brenda Blessing and Russell Moore wanted the second proposal with defined quadrants. They liked how each district had simple boundaries. 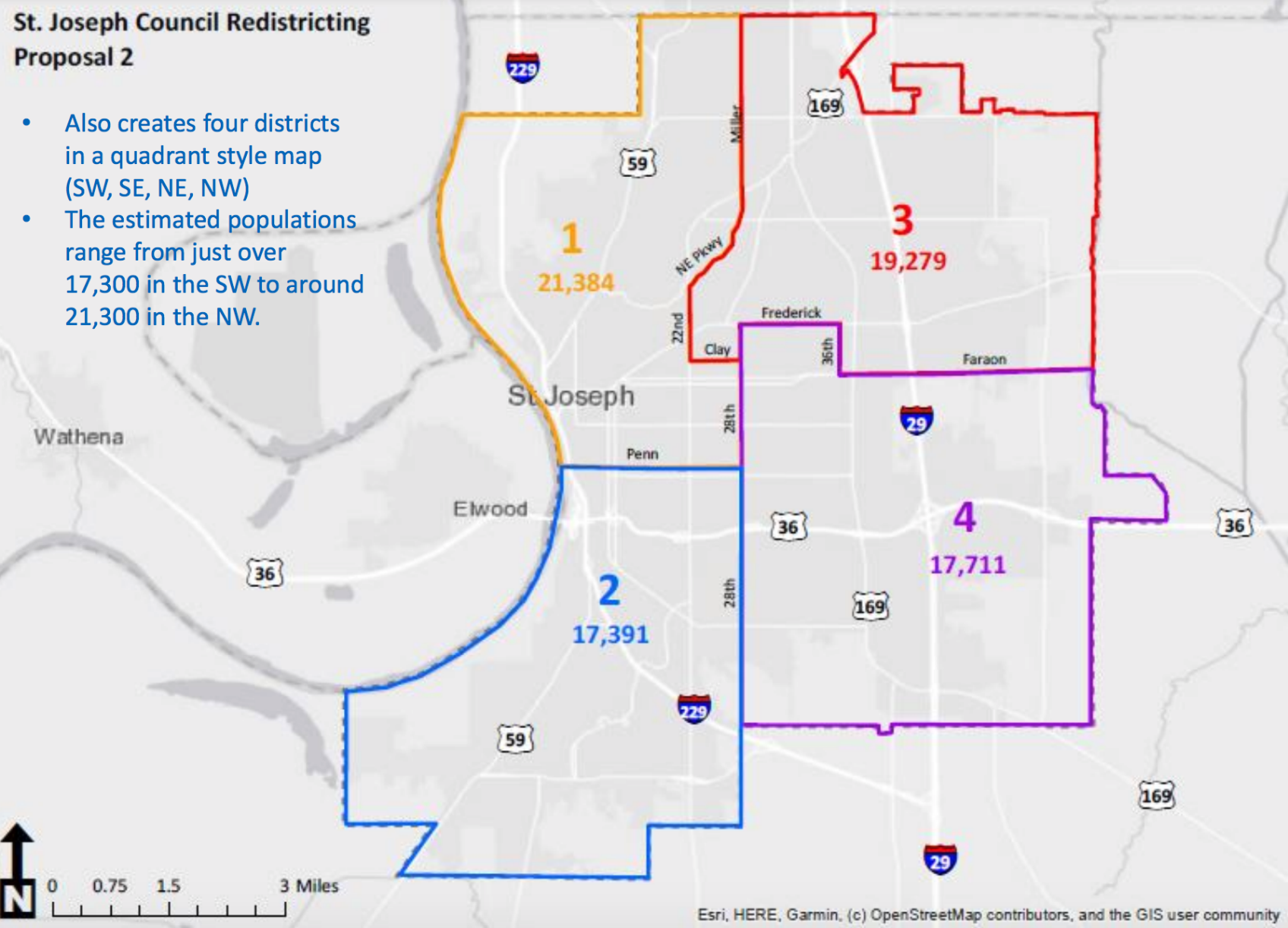 The second proposal for the council redistricting.

This proposal was less equal with nearly a 4,000 person difference between two districts. But the councilmembers were more concerned that the third proposal split the North End and the South Side. McMurray sees this as a positive.

There wasn’t consensus, because three members were absent from the meeting. City Manager Bryan Carter will contact the missing members to get their input. Whatever proposal is preferred the most will go before the council for a formal vote.

Community members and figures gathered to honor the contributions Fire Chief Mike Dalsing made in his 41 years of service.

Speakers at the event included City Manager Brian Carter, Mayor Bill McMurray and incoming Interim Fire Chief Kenny Cordonnier. During the retirement party, Dalsing was given a community honor from the Missouri House of Representatives and a key to St. Joseph.

Emotions were high during a speech by Cordonnier as he reminisced on their time at the station together.

“It’s probably every fire chief’s ambition to leave a department better than you found it, and I hate to see you go, man,” Cordonnier said. 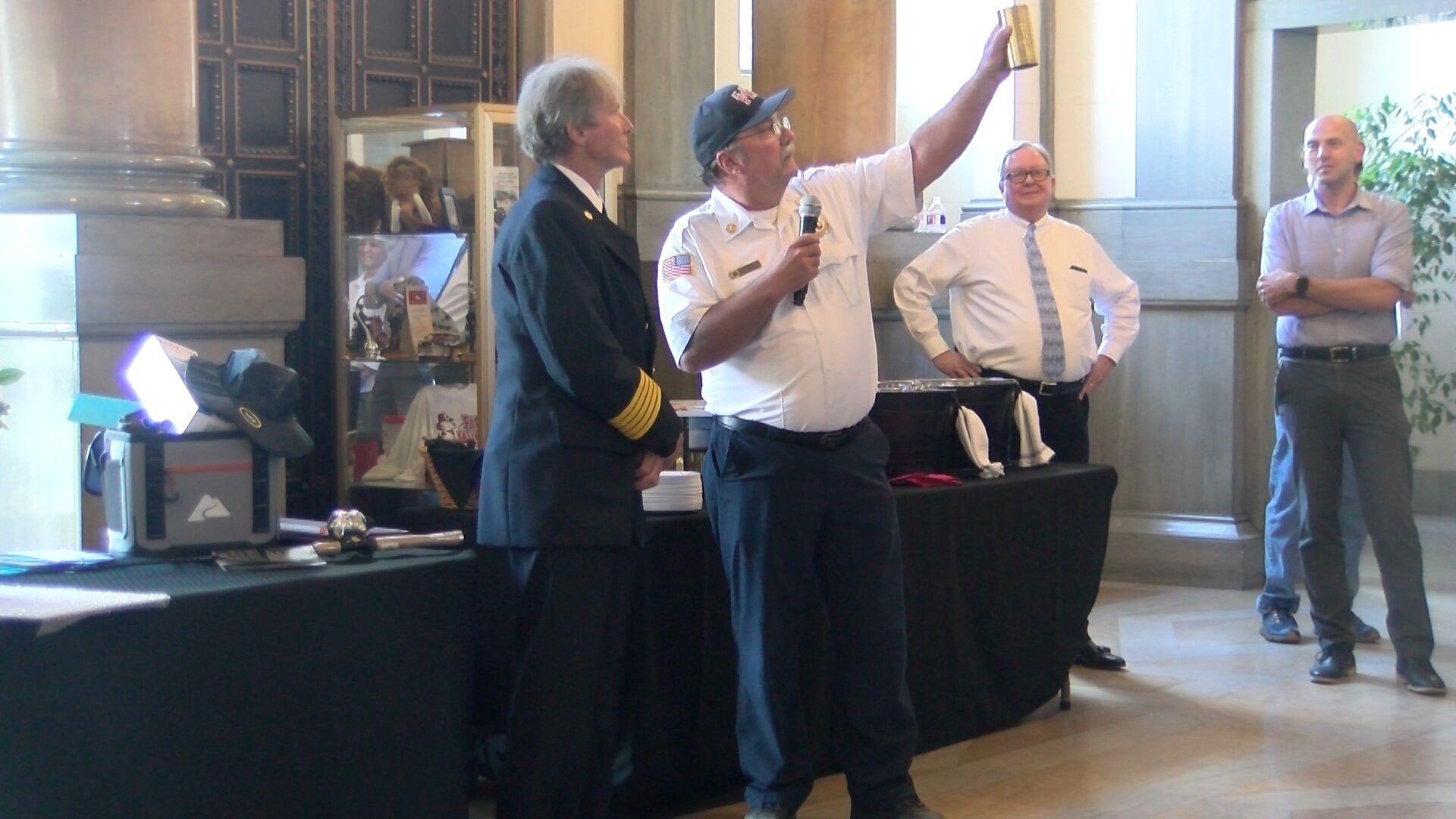 Emotions were high during a speech by Kenny Cordonnier as he reminisced on his time with Fire Chief Mike Dalsing.

Dalsing said these emotions are felt by him and many of those working with him.

The event brought dozens of people to City Hall. Dalsing said he is excited for retirement and grateful for everyone that showed up for him.

“I wasn’t expecting anything this big so it was really nice,” he said. “It’s a different phase in my life and I think I’m ready for it. It’s good for the department because there will be some new faces and the learning curve kind of changes a bit.”

Dalsing started with the St. Joseph Fire Department in 1979, taking over as fire chief in 2008. During his time as chief, Dalsing oversaw the completion of fire Stations 9, 11 and 12 as well as the groundbreaking of Station 8. Dalsing also was instrumental in the addition of first responders to the department, contributing training and expertise.

He has contributed time to the community as an active member of the International Association of Fire Chiefs, Missouri Fire Chiefs and the Kansas City area Heart of America Fire Chiefs, as well as serving on the boards of the Safety and Health Council, United Way and St. Joseph Youth Soccer Association.

Dalsing’s family was in attendance, including his younger brother, Vince Dalsing. He said he was proud to see the impact Dalsing made as fire chief.

“I just want to wish him well. He’s done well for St. Joseph. I think 41 years is a long time on the job and he’s got a lot of respect from the people of St. Joe,” he said. “I’m proud of him and by the size of the group of people that have come out, I think he’s done a great job for St. Joseph.”

Dalsing’s last day as chief will be Thursday, June 10. Cordonnier, the current fire prevention chief, will serve as interim fire chief. Cordonnier has been with the department for 39 years.