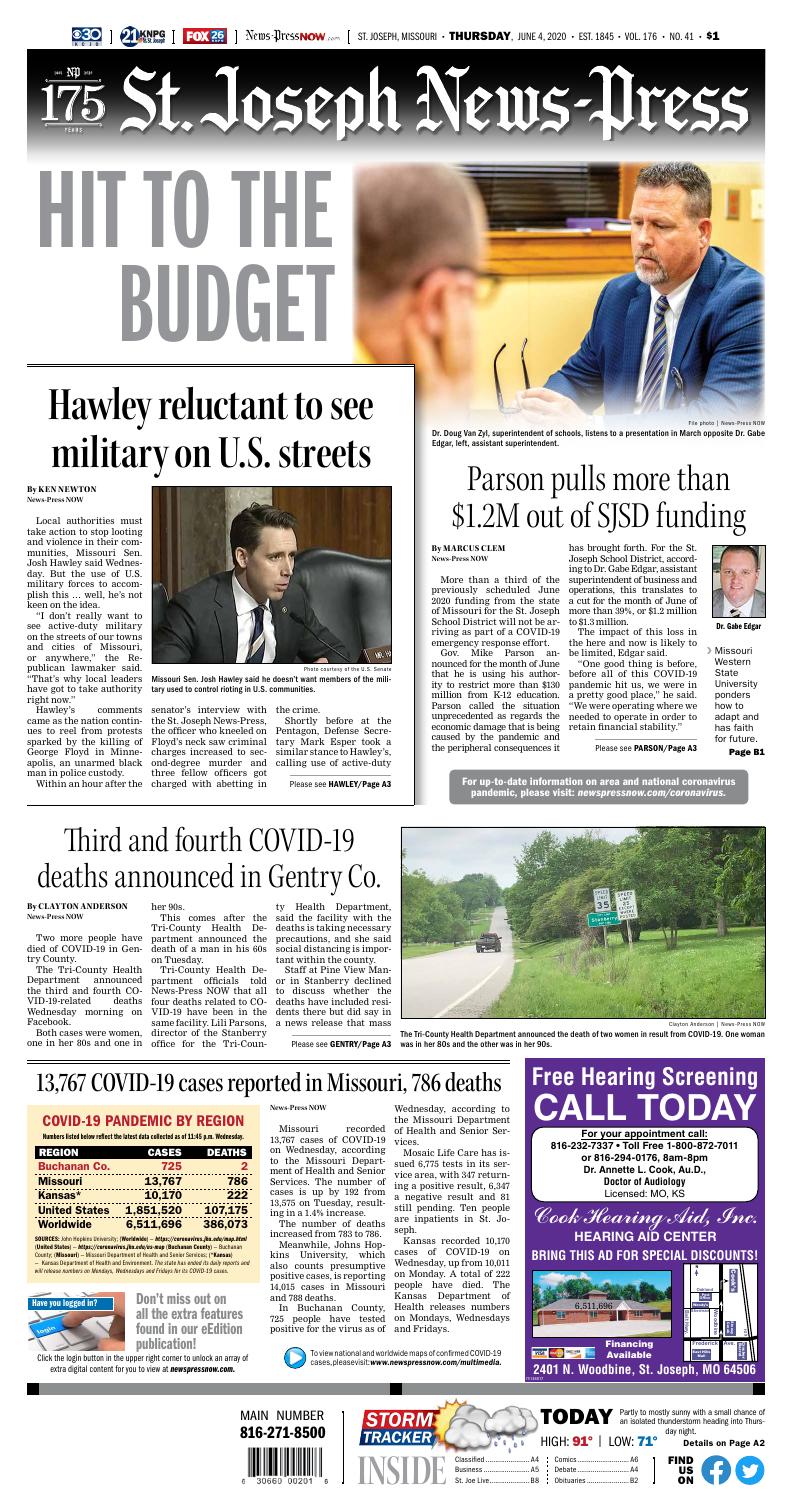 More than a third of the previously scheduled June 2020 funding from the state of Missouri for the St. Joseph School District will not be arriving as part of a COVID-19 emergency response effort.

Gov. Mike Parson announced for the month of June that he is using his authority to restrict more than $130 million from K-12 education. Parson called the situation unprecedented as regards the economic damage that is being caused by the pandemic and the peripheral consequences it has brought forth. For the St. Joseph School District, according to Dr. Gabe Edgar, assistant superintendent of business and operations, this translates to a cut for the month of June of more than 39%, or $1.2 million to $1.3 million.

The impact of this loss in the here and now is likely to be limited, Edgar said.

“One good thing is before, before all of this COVID-19 pandemic hit us, we were in a pretty good place,” he said. “We were operating where we needed to operate in order to retain financial stability.”

That’s primarily because the Apple Bus Company will not receive some $850,000 in payments it had been slated, because there was no need to transport students through much of the spring 2020 semester. In addition, the Board of Education opted to put off maintenance and other projects for district buildings at its May meeting, the value of which exceeds $400,000.

Even without these saving measures, Edgar said, the district had been in a stable financial position. For the last several days, he has endeavored to explain that the painful consequences of COVID-19 will remain on the horizon until the time comes to plan for the FY 2022 budget, which will begin on July 1, 2021, and run through June 30, 2022. When it is plotted out this fall, Edgar said, it is unlikely that job losses for the school district will be able to be avoided. The planning process for FY 2022 begins in November.

Most, perhaps all, of these job losses can be accounted for via attrition; people will retire and then won’t be replaced. The impact will remain significant, based on what can be predicted. Harder to predict will be the distinct possibility that Parson will initiate further budget restrictions as the state moves into FY 2021. Edgar said that the district is currently operating from a conservative, pessimistic standpoint with regard to other revenue sources, such as the property tax levy.

While the FY 2020 budget presumed a 96 percent collectible rate from area taxpayers, the FY 2021 budget is designed to allow for a collectible rate of 90 percent. A spike in taxpayer delinquencies is the predicted norm as a deep national recession fueled by COVID-19 drags on.

“There’s gonna be some hard conversations that are gonna have to happen come November,” Edgar said.

Local authorities must take action to stop looting and violence in their communities, Missouri Sen. Josh Hawley said Wednesday. But the use of U.S. military forces to accomplish this … well, he’s not keen on the idea.

“I don’t really want to see active-duty military on the streets of our towns and cities of Missouri, or anywhere,” the Republican lawmaker said. “That’s why local leaders have got to take authority right now.”

Hawley’s comments came as the nation continues to reel from protests sparked by the killing of George Floyd in Minneapolis, an unarmed black man in police custody.

Within an hour after the senator’s interview with the St. Joseph News-Press, the officer who kneeled on Floyd’s neck saw criminal charges increased to second-degree murder and three fellow officers got charged with abetting in the crime.

Shortly before at the Pentagon, Defense Secretary Mark Esper took a similar stance to Hawley’s, calling use of active-duty military personnel to quell domestic unrest a measure “of last resort.”

Such an order would invoke the Insurrection Act, an 1807 law rarely used to intervene in protecting Americans when states can’t or won’t. A former professor of constitutional law, Hawley said the president has this authority.

“At the end of the day, if the only way is to invoke what’s called the Insurrection Act and to use the U.S. military, then that’s certainly an option that’s got to be on the table,” he said.

The senator, a member of the chamber’s Armed Services Committee, added, though, “I don’t want it to come to that.”

The senator said he supported the rights of Americans to protest peacefully, but the actions that have gone beyond that should be brought under control.

Hawley’s Senate colleague, Missouri Republican Roy Blunt, expressed a need for national healing in the aftermath of the Floyd killing, while also calling for a halt to violence in American cities, including Kansas City and St. Louis.

“I said after the Ferguson protests that tragedy is a tough teacher, but that makes it ever more important to learn from tragedy,” Blunt said in a statement this week. “Let’s learn from this. Let’s listen to one another and work together to become the nation we ought to be.”

The Tri-County Health Department announced the death of two women in result from COVID-19. One woman was in her 80s and the other was in her 90s.

Two more people have died of COVID-19 in Gentry County.

This comes after the Tri-County Health Department announced the death of a man in his 60s on Tuesday.

Staff at Pine View Manor in Stanberry declined to discuss whether the deaths have included residents there but did say in a news release that mass testing had been performed at the facility and resulted in some positive cases.

Pam Hailey, Pine View administrator, said the families of residents who tested positive were informed along with the Tri-County Health Department.

She said in the release that staff are following all guidelines recommended and are taking steps to protect and care for residents.

“We are taking diligent measures around the clock to monitor and protect the health of our residents and keep their families informed,” Hailey said.

Hailey said visitors and other non-medical personnel have not been permitted in the facility for several weeks and staff have been screening residents twice a day for any temperature or other COVID-19 symptoms as well as taking the temperature of staff members and screening them prior to shifts.

Hailey said she has been proud of her staff and the continued effort each day.

“They are heroes, and I am proud to be a part of this team. We are going through a difficult time and we appreciate all the support that is shown to us by many,” Hailey said.

Missouri recorded 13,767 cases of COVID-19 on Wednesday, according to the Missouri Department of Health and Senior Services. The number of cases is up by 192 from 13,575 on Tuesday, resulting in a 1.4% increase.

In Buchanan County, 725 people have tested positive for the virus as of Wednesday, according to the Missouri Department of Health and Senior Services.

Mosaic Life Care has issued 6,775 tests in its service area, with 347 returning a positive result, 6,347 a negative result and 81 still pending. Ten people are inpatients in St. Joseph.

Kansas recorded 10,170 cases of COVID-19 on Wednesday, up from 10,011 on Monday. A total of 222 people have died. The Kansas Department of Health releases numbers on Mondays, Wednesdays and Fridays. 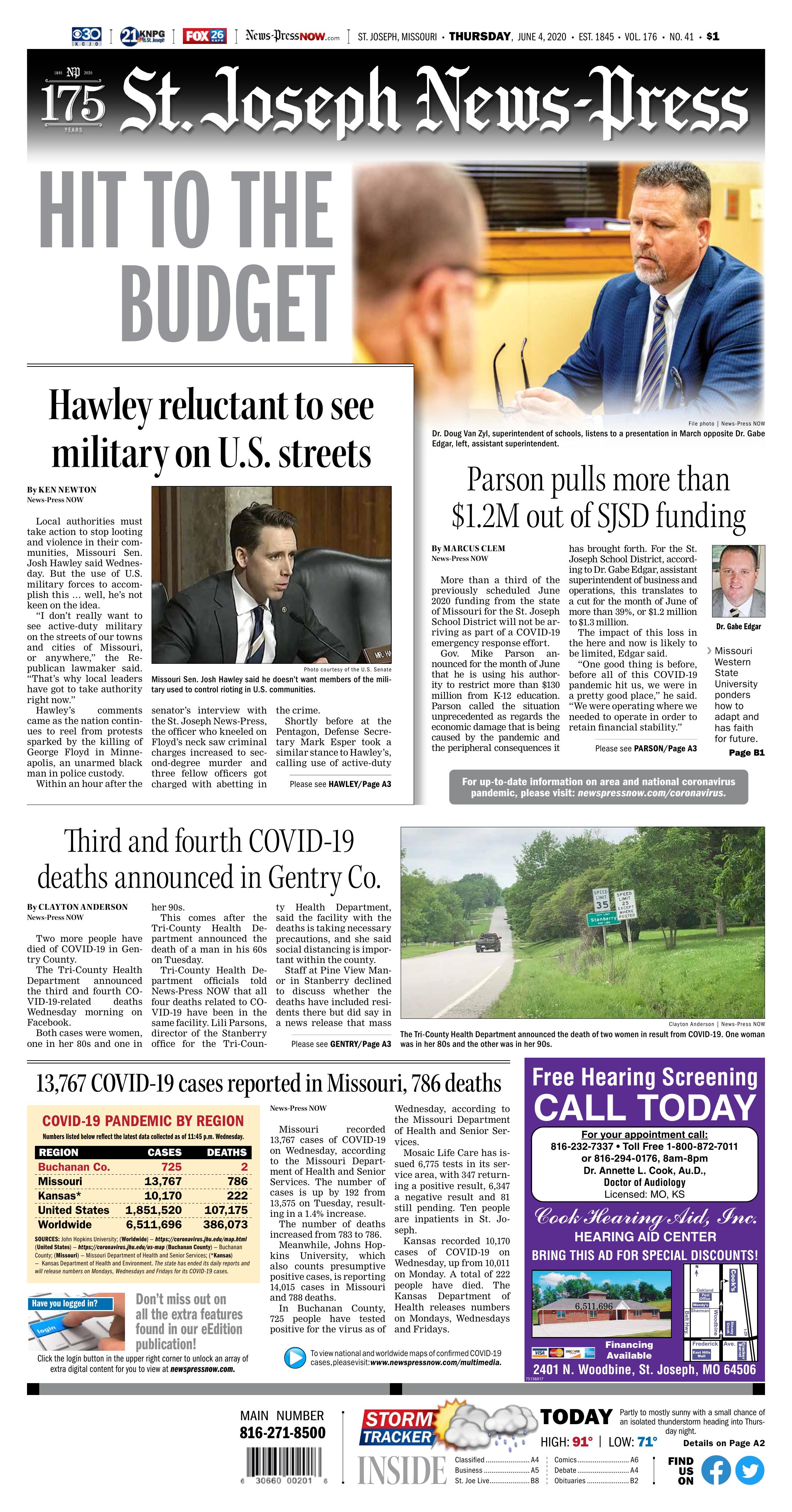