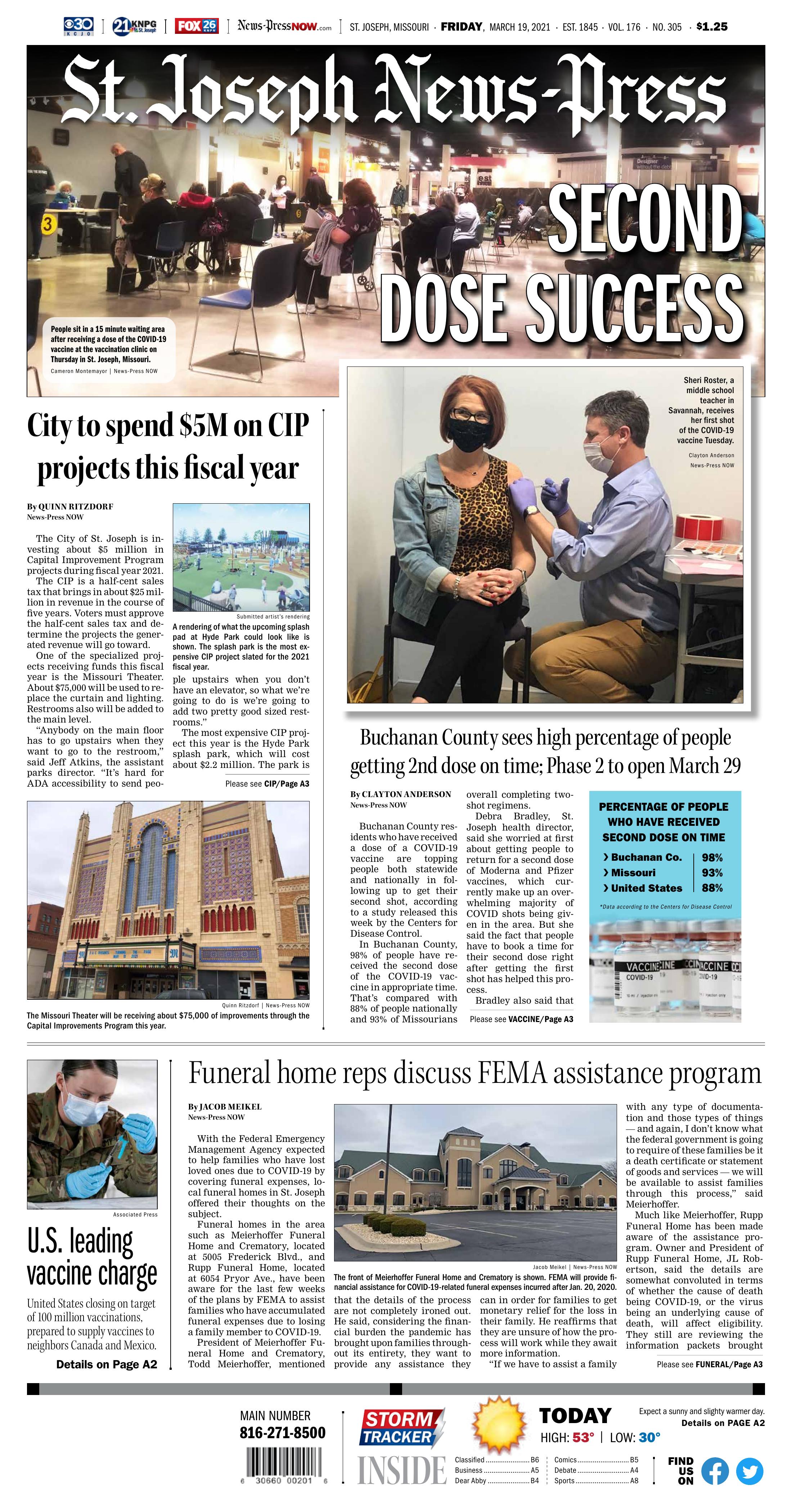 Buchanan County residents who have received a dose of a COVID-19 vaccine are topping people both statewide and nationally in following up to get their second shot, according to a study released this week by the Centers for Disease Control.

In Buchanan County, 98% of people have received the second dose of the COVID-19 vaccine in appropriate time. That’s compared with 88% of people nationally and 93% of Missourians overall completing two-shot regimens.

Debra Bradley, St. Joseph health director, said she worried at first about getting people to return for a second dose of Moderna and Pfizer vaccines, which currently make up an overwhelming majority of COVID shots being given in the area. But she said the fact that people have to book a time for their second dose right after getting the first shot has helped this process.

Bradley also said that the efficiency and ease of the St. Joseph vaccination clinic inside the East Hills Shopping Center has made it easy for people to come back for a second dose.

“If people had to jump through a bunch of hurdles to get their vaccine, whether it be their first or their second, then people may not be as eager to get it,” Bradley said.

Bradley said she also believes that those who are excited and eager about getting the vaccine have been the first to get in line and that is why they are not missing the second dose.

“I was happy to have a good response for first doses and I hope that that continues, and giving the second dose has been a pleasant surprise with the rate of return,” Bradley said.

In coming weeks, even more Missourians will be eligible for COVID-19 vaccines. The shots became available Monday to a large number of essential workers, including teachers and those working in communications, technology and food and agriculture services.

Gov. Mike Parson announced Thursday afternoon that those in Phase 2 of the state’s vaccination plan, which includes approximately 880,000 Missourians employed in areas like construction, critical manufacturing, higher education and remaining food and agriculture sectors, will have access to shots Monday, March 29.

Phase 3, which will open vaccines to all adults in Missouri, will begin Friday, April 9, Parson said.

“With the progress we are currently seeing and vaccine supply expected to increase significantly in the coming weeks, we are well ahead of schedule with our vaccine plan,” Parson said. “Supply projections are subject to change, but it is critical that we start preparing for this potential influx and ensure there is a consistent number of people who are eligible and interested in receiving a vaccine.”

As of Thursday, 12.1% of people in Buchanan County had at least received one dose of the vaccine. That number still trails the 20.5% of citizens statewide who have gotten a vaccine.

The Missouri Theater will be receiving about $75,000 of improvements through the Capital Improvements Program this year.

The City of St. Joseph is investing about $5 million in Capital Improvement Program projects during fiscal year 2021.

One of the specialized projects receiving funds this fiscal year is the Missouri Theater. About $75,000 will be used to replace the curtain and lighting. Restrooms also will be added to the main level.

“Anybody on the main floor has to go upstairs when they want to go to the restroom,” said Jeff Atkins, the assistant parks director. “It’s hard for ADA accessibility to send people upstairs when you don’t have an elevator, so what we’re going to do is we’re going to add two pretty good sized restrooms.”

The most expensive CIP project this year is the Hyde Park splash park, which will cost about $2.2 million. The park is expected to open this summer and will be free to use.

However, not all the $2.2 million allocated for the project is likely to be used. The most recent projection for the project was about $1.8 million. This isn’t uncommon. Leftover CIP funds are typically used on similar projects, so if the parks department doesn’t use all of the $2.2 million, the rest likely will be used on another parks project.

Almost $1.8 million in CIP funds will be spent over the next two years for design and construction of the Eastowne Business Park.

“The work that was approved by the voters was to basically develop additional or new infrastructure for the next phase of the business park,” said Andy Clements, the public works and transportation director. “It would be doing the stormwater work and the extended sewers and building three roads for that development, so they have more industrial commercial lots available for new employers.”

CIP projects are dispersed evenly over a five-year period and allocated a certain amount of funds. However, funds for a project can’t be used until its designated fiscal year begins.

But the schedule can change. For example, John Lucas Park and the Bartlett Center are being renovated this year, even though they weren’t scheduled for CIP funds until fiscal year 2023 and 2024.

This requires other CIP projects to be moved back in the schedule. More than $400,000 were supposed to be used on the Aquatic Park, but the city decided to move the project back as it will cost more than expected.

These projects also don’t have to rely only on CIP funds. Many city playgrounds were able to be renovated earlier than scheduled because the parks and recreation department received Community Development Block Grant money.

“The other playgrounds, as their money becomes available in the CIP, we will go back to those same playgrounds and put new surfacing, rubber poured-in-place surfacing,” Atkins said

On top of the special projects, the CIP schedule also includes recurring improvements. For example, every year $900,000 is allocated for asphalt streets and $150,000 is used for the sidewalk grant program.

The Hyde Park splash park is the most expensive project during this five-year CIP schedule. Other future costly projects include $1 million for the new animal shelter in fiscal year 2023 and $1.4 million to purchase a ladder truck for the fire department in 2024.

The front of Meierhoffer Funeral Home and Crematory is shown. FEMA will provide financial assistance for COVID-19-related funeral expenses incurred after Jan. 20, 2020.

With the Federal Emergency Management Agency expected to help families who have lost loved ones due to COVID-19 by covering funeral expenses, local funeral homes in St. Joseph offered their thoughts on the subject.

Funeral homes in the area such as Meierhoffer Funeral Home and Crematory, located at 5005 Frederick Blvd., and Rupp Funeral Home, located at 6054 Pryor Ave., have been aware for the last few weeks of the plans by FEMA to assist families who have accumulated funeral expenses due to losing a family member to COVID-19.

President of Meierhoffer Funeral Home and Crematory, Todd Meierhoffer, mentioned that the details of the process are not completely ironed out. He said, considering the financial burden the pandemic has brought upon families throughout its entirety, they want to provide any assistance they can in order for families to get monetary relief for the loss in their family. He reaffirms that they are unsure of how the process will work while they await more information.

“If we have to assist a family with any type of documentation and those types of things — and again, I don’t know what the federal government is going to require of these families be it a death certificate or statement of goods and services — we will be available to assist families through this process,” said Meierhoffer.

Much like Meierhoffer, Rupp Funeral Home has been made aware of the assistance program. Owner and President of Rupp Funeral Home, JL Robertson, said the details are somewhat convoluted in terms of whether the cause of death being COVID-19, or the virus being an underlying cause of death, will affect eligibility. They still are reviewing the information packets brought forth by the national organization regarding the matter and the details that are available now.

“If the government can see in their ways in funding to give some relief and compassion to these grieving families, we would be happy to assist our families in this process,” said Robertson.

Meierhoffer believes a loved one cannot be replaced by monetary compensation or otherwise, but a federal assistance program can certainly help lessen a financial burden.

“This is one way that the federal government is seeing an opportunity to help the families with money and it’s doing it through those who have lost a loved one,” Meierhoffer said.

FEMA’s website states that applications will be accepted starting in April. For more information, go to fema.gov/disasters/coronavirus/economic/funeral-assistance.