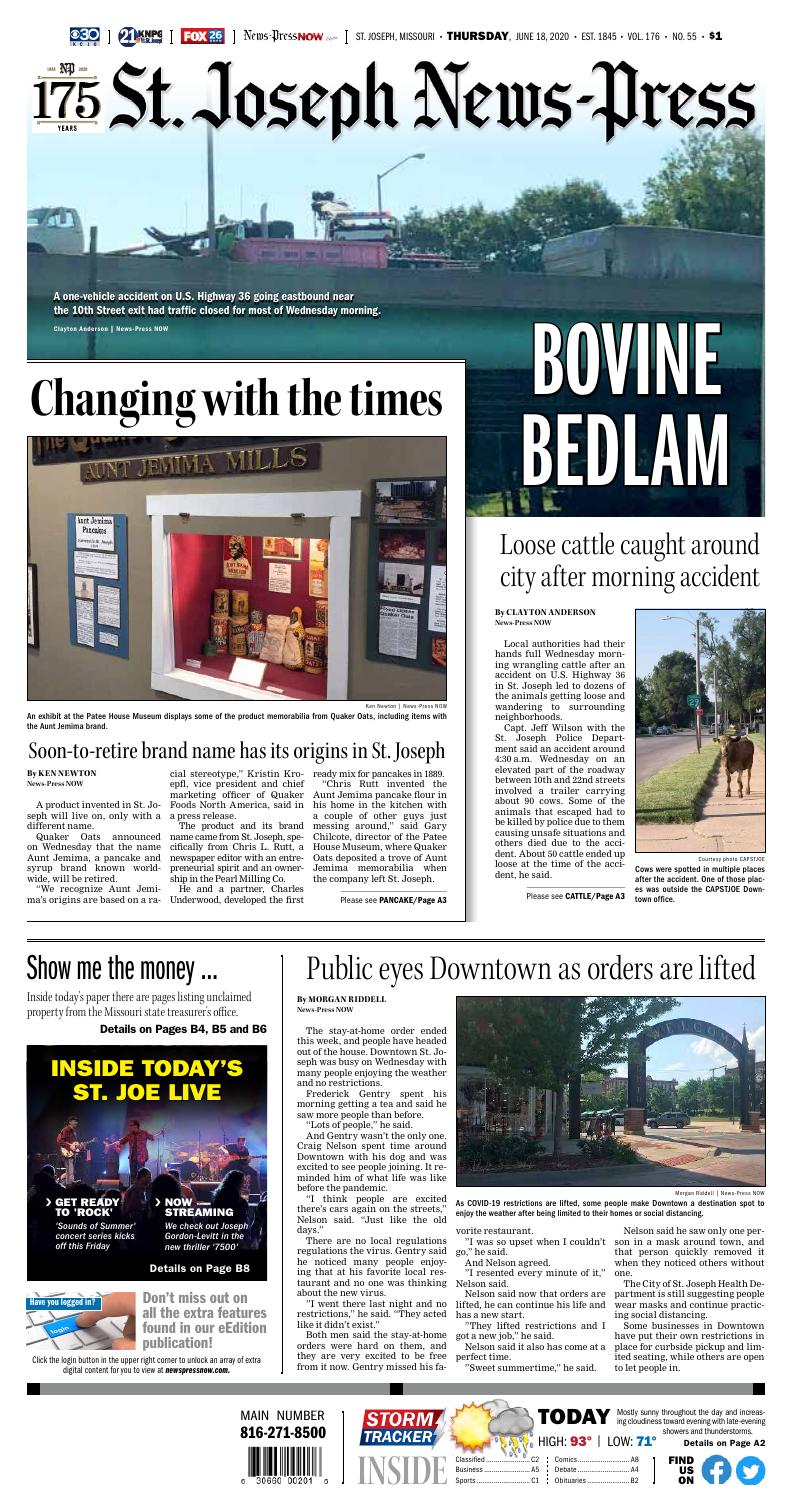 A one-vehicle accident on U.S. Highway 36 going eastbound near the 10th Street exit had traffic closed for most of Wednesday morning.

Cows were wrangled by the St. Joseph Police Department, Missouri State Highway Patrol and local cowboy groups after they escaped a one-vehicle accident Wednesday morning. Some of the animals were taken to the St. Joseph Stockyards.

The Missouri State Highway Patrol was part of the search crew to find cattle that had escaped after an accident Wednesday morning on U.S. Highway 36.

Cows were spotted in multiple places after the accident. One of those places was outside the CAPSTJOE Downtown office.

Local authorities had their hands full Wednesday morning wrangling cattle after an accident on U.S. Highway 36 in St. Joseph led to dozens of the animals getting loose and wandering to surrounding neighborhoods.

Capt. Jeff Wilson with the St. Joseph Police Department said an accident around 4:30 a.m. Wednesday on an elevated part of the roadway between 10th and 22nd streets involved a trailer carrying about 90 cows. Some of the animals that escaped had to be killed by police due to them causing unsafe situations and others died due to the accident. About 50 cattle ended up loose at the time of the accident, he said.

“Several of the cattle had to be dispatched for safety reasons, getting in traffic on highways and stuff like that,” Wilson said.

The crash closed parts of Highway 36 for several hours while officers and others worked to contain the cattle. Wilson said there were still some cows unaccounted for in rural areas, but animals were gathered as far away as Pickett Road and in various other locations south of the accident site, including Ajax Road.

Motorists were urged to stay alert in case cows wandered into their path.

Several law enforcement agencies and cowboy groups were in charge of rounding up cattle that got loose from the incident, Wilson said. Cows that were found were taken to various farms or the St. Joseph Stockyards.

“There’s some cattle that are unaccounted for, those that have made it outside the city into the rural areas and stuff like that, so that information will probably be hard to ascertain,” Wilson said.

Wilson said the rollover was a one-vehicle accident and the driver of the cattle truck was injured and transported to the hospital.

Police continue to seek the public’s assistance in locating missing cattle. If a cow is sighted, people are urged to call the St. Joseph Police Department’s emergency number at 816-271-4777.

An exhibit at the Patee House Museum displays some of the product memorabilia from Quaker Oats, including items with the Aunt Jemima brand.

One of the items exhibited at the Patee House Museum is the handwritten recipe for Aunt Jemima pancake flour.

A product invented in St. Joseph will live on, only with a different name.

Quaker Oats announced on Wednesday that the name Aunt Jemima, a pancake and syrup brand known worldwide, will be retired.

“We recognize Aunt Jemima’s origins are based on a racial stereotype,” Kristin Kroepfl, vice president and chief marketing officer of Quaker Foods North America, said in a press release.

The product and its brand name came from St. Joseph, specifically from Chris L. Rutt, a newspaper editor with an entrepreneurial spirit and an ownership in the Pearl Milling Co.

He and a partner, Charles Underwood, developed the first ready mix for pancakes in 1889.

“Chris Rutt invented the Aunt Jemima pancake flour in his home in the kitchen with a couple of other guys just messing around,” said Gary Chilcote, director of the Patee House Museum, where Quaker Oats deposited a trove of Aunt Jemima memorabilia when the company left St. Joseph.

“(Rutt) came up with something that he thought would be successful, and so after a few tries, they decided to make it commercially.”

History notes that Rutt heard the song “Old Aunt Jemima” while attending a minstrel show. The song had been written in 1875 by African-American entertainer Billy Kersands.

Aunt Jemima became the name of the self-rising pancake concoction, though Rutt and Underwood did not hold onto it for long. In 1890, they sold the recipe to the R.T. Davis Milling Co., which began manufacturing the product.

The brand got a boost from its exposure at the World’s Columbian Exposition in Chicago in 1893.

Davis also set out out to find a “living trademark,” which turned out to be a woman named Nancy Green, who did in-person promotions as Aunt Jemima but also had her image applied to countless boxes of pancake mix.

The flour mill in St. Joseph, first at Second and Edmond streets, would become the Aunt Jemima Mills in 1913. Quaker bought the Aunt Jemima brand in 1926. The Quaker Oats factory on South 11th Street near Garfield Avenue became one of the largest employers in the city before closing in 2001.

At the Patee House, a second-floor exhibit includes various Aunt Jemima posters, containers and crates, and interpretive signs regarding the well-known product. It also has a rarity.

“That’s his handwritten recipe for the (flour),” Chilcote said, pointing to a paper dated November 1889 and signed by Rutt. “It’s a pretty big quantity, so you don’t want to try it on your own. But nonetheless, that was his recipe.”

Rutt, who came to St. Joseph in 1885, would eventually become managing editor of the St. Joseph News-Press. He died in 1936, age 76, and is buried at Mount Olivet Cemetery.

New packaging for Aunt Jemima products, absent the long-established image, will be on store shelves later this year. A new name will be forthcoming at some point after that.

In its announcement on Wednesday, Quaker Oats, a subsidiary of PepsiCo, Inc., indicated its ongoing efforts in reaching out to diverse communities.

“As we work to make progress toward racial equality through several initiatives, we also must take a hard look at our portfolio of brands and ensure they reflect our values and meet our consumers’ expectations,” Kroepfl said in her press release.

As COVID-19 restrictions are lifted, some people make Downtown a destination spot to enjoy the weather after being limited to their homes or social distancing.

The stay-at-home order ended this week, and people have headed out of the house. Downtown St. Joseph was busy on Wednesday with many people enjoying the weather and no restrictions.

Frederick Gentry spent his morning getting a tea and said he saw more people than before.

And Gentry wasn’t the only one. Craig Nelson spent time around Downtown with his dog and was excited to see people joining. It reminded him of what life was like before the pandemic.

“I think people are excited there’s cars again on the streets,” Nelson said. “Just like the old days.”

There are no local regulations regulations the virus. Gentry said he noticed many people enjoying that at his favorite local restaurant and no one was thinking about the new virus.

”I went there last night and no restrictions,” he said. “They acted like it didn’t exist.”

Both men said the stay-at-home orders were hard on them, and they are very excited to be free from it now. Gentry missed his favorite restaurant.

”I resented every minute of it,” Nelson said.

Nelson said now that orders are lifted, he can continue his life and has a new start.

”They lifted restrictions and I got a new job,” he said.

Nelson said it also has come at a perfect time.

Nelson said he saw only one person in a mask around town, and that person quickly removed it when they noticed others without one.

Some businesses in Downtown have put their own restrictions in place for curbside pickup and limited seating, while others are open to let people in. 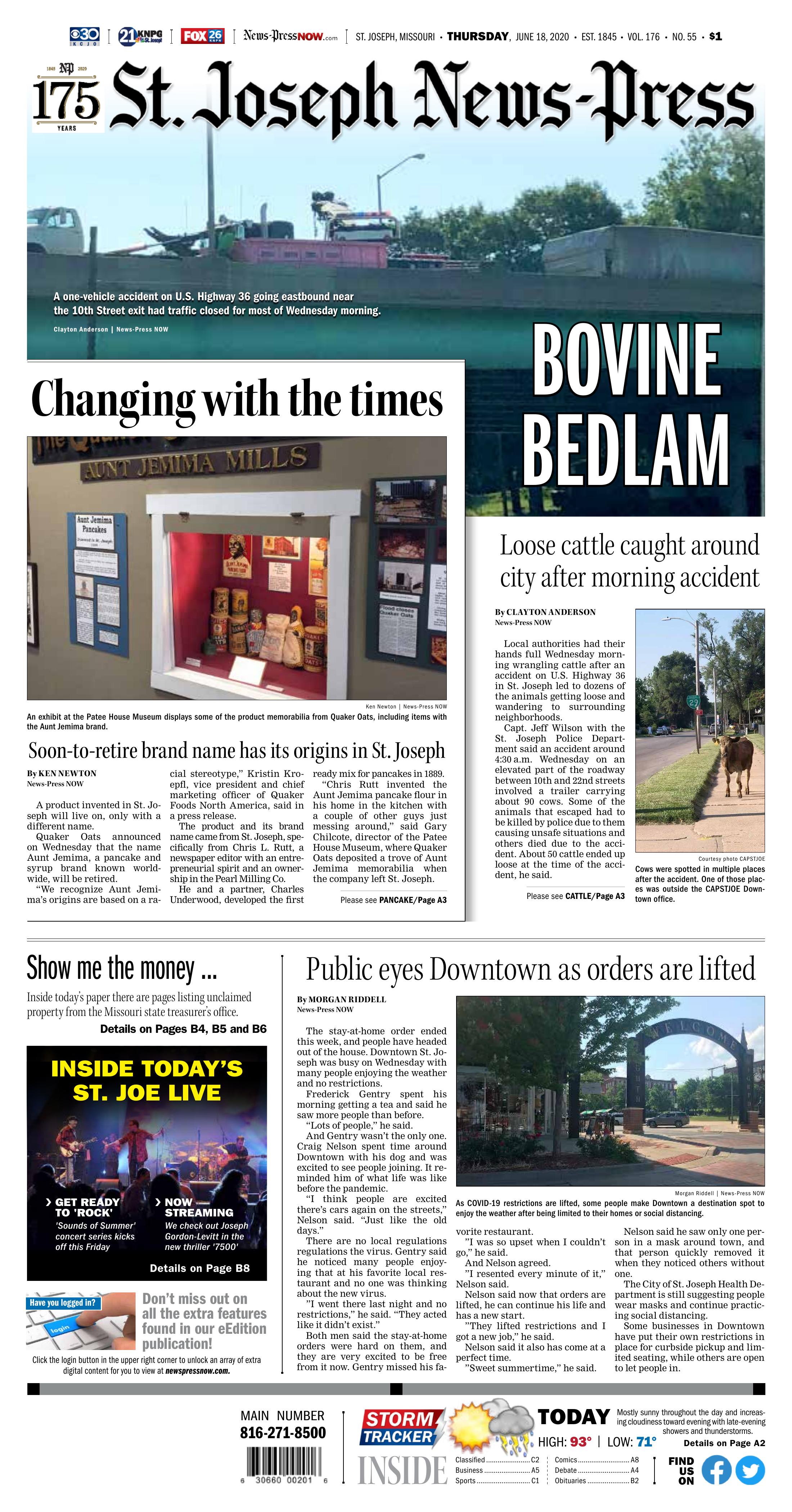