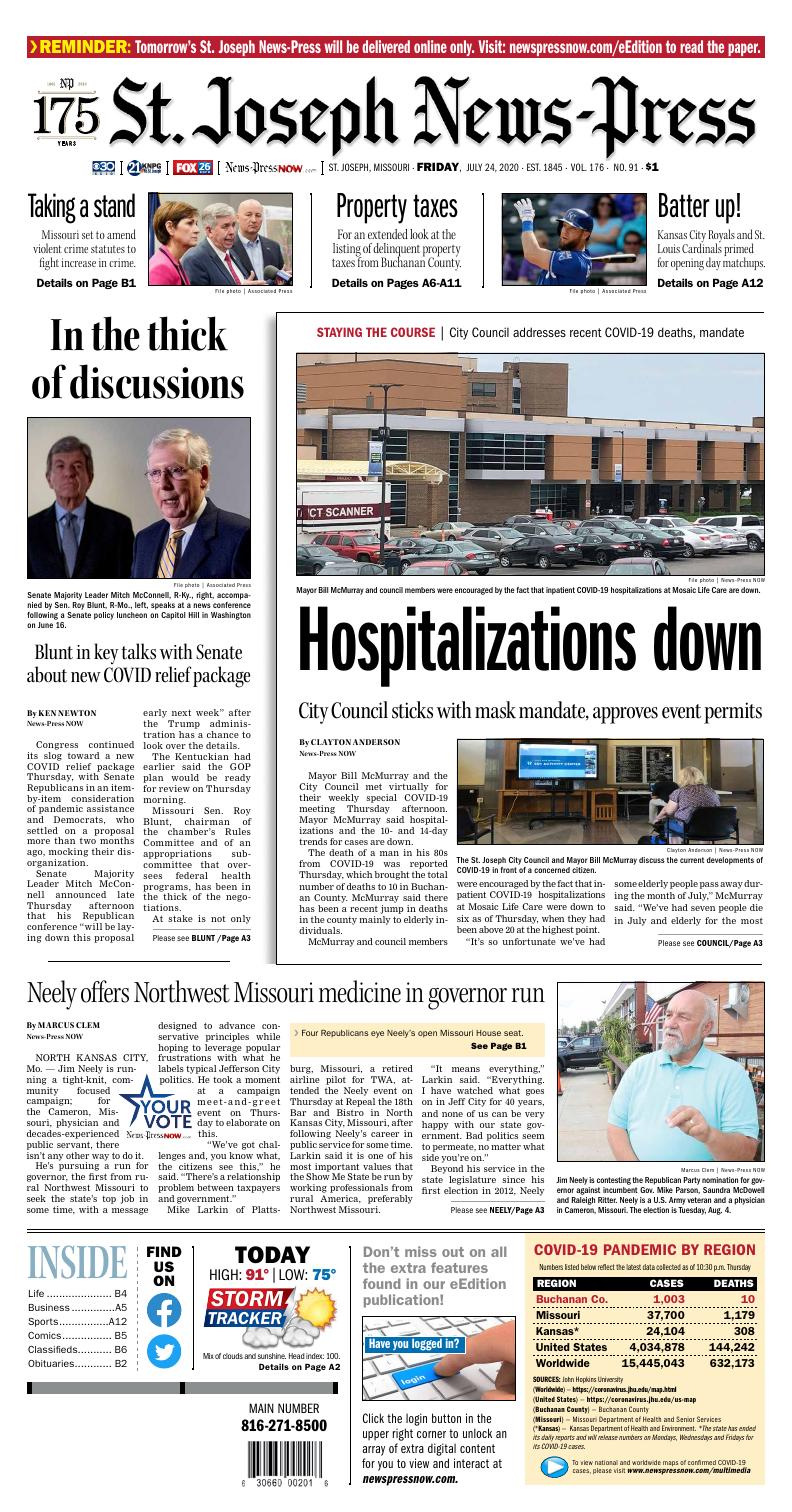 The St. Joseph City Council and Mayor Bill McMurray discuss the current developments of COVID-19 in front of a concerned citizen.

Mayor Bill McMurray and the City Council met virtually for their weekly special COVID-19 meeting Thursday afternoon. Mayor McMurray said hospitalizations and the 10- and 14-day trends for cases are down.

The death of a man in his 80s from COVID-19 was reported Thursday, which brought the total number of deaths to 10 in Buchanan County. McMurray said there has been a recent jump in deaths in the county mainly to elderly individuals.

McMurray and council members were encouraged by the fact that inpatient COVID-19 hospitalizations at Mosaic Life Care were down to six as of Thursday, when they had been above 20 at the highest point.

“It’s so unfortunate we’ve had some elderly people pass away during the month of July,” McMurray said. “We’ve had seven people die in July and elderly for the most part, if not all, and so I mean, that’s terrible,” McMurray said.

The council decided to see where cases go in the coming weeks and continued to keep the mandate in place of requiring a mask inside retail locations bigger than 10,000 square feet.

The council and McMurray also discussed events that were wanting event permits later this summer, such as a carnival and Parties on the Parkway.

All council members agreed that outdoor events should continue for now while the city continues to watch the cases. Council Member Brian Myers asked for advice from City of St. Joseph Health Department Director Debra Bradley, who said risk was still there at outdoor events, although it was less.

All council members agreed with moving forward with these public events, and Council Member Marty Novak alluded to the social distancing measures that were taken at the carnival this past month, while councilman P.J. Kovak mentioned the decrease in hospitalizations.

“I’ve always said it’s a three-legged stool — it’s the metrics, it’s the medical opinion, and it’s the economics, And so we don’t want to deprive people of being able to get out and do things if they can do it safely with the proper distancing and other risk management and the medical opinion at this point,” McMurray said.

St. Joseph Area Chamber of Commerce President Patt Lilly assured the council that Parties on the Parkway will take measures to encourage social distancing, such as having multiple beverage areas to avoid lines.

One woman from the public addressed the council, saying she has seen a lack of enforcement from retailers in spaces greater than 10,000 feet.

Myers addressed the flooding in the South End at the end of the meeting. McMurray responded that the City Council will discuss the logistics of the flooding at the meeting Monday, but the city will be spending around $21,000 from the cellphone tax for dumpsters and other supplies for the cleanup.

“I think it’s important to recognize the quick response from the Fire Department, the Streets Department, and all the other entities that were involved,” Myers said.

Congress continued its slog toward a new COVID relief package Thursday, with Senate Republicans in an item-by-item consideration of pandemic assistance and Democrats, who settled on a proposal more than two months ago, mocking their disorganization.

Senate Majority Leader Mitch McConnell announced late Thursday afternoon that his Republican conference “will be laying down this proposal early next week” after the Trump administration has a chance to look over the details.

The Kentuckian had earlier said the GOP plan would be ready for review on Thursday morning.

Missouri Sen. Roy Blunt, chairman of the chamber’s Rules Committee and of an appropriations subcommittee that oversees federal health programs, has been in the thick of the negotiations.

At stake is not only a path forward for the fight against a microbe that has killed nearly 144,000 Americans, and infected roughly 4 million more, but a monetary boost for more than 17 million people put out of work by the pandemic.

The stimulus checks that landed in American checking accounts this spring? The additional $600 a week in unemployment benefits for those thrown out of work? Those might make a return. Or not. It depends on the negotiations.

“Everything always takes longer than you think it’s going to take unless it happens immediately,” Blunt told Politico.com in a story published Thursday afternoon. “I’m not surprised by this.”

Democratic leaders also withheld their surprise, but not in a good way. The Senate’s minority leader, Chuck Schumer of New York, called Republicans “so divided, so disorganized, so unprepared” that they could not draft a document to begin negotiations.

Blunt said earlier this week that the Republicans had goals in mind.

“Basically, we’re for back to school, back to work, back to child care and back to better health,” the Missouri senator said. “That all takes more testing, more therapeutics, vaccines that are not only developed as quickly as we can develop them but properly and fairly and equitably delivered.”

Sen. Lamar Alexander, a Tennessee Republican and chairman of the Health, Education, Labor and Pensions Committee, said Thursday afternoon that GOP senators had reached an agreement on testing.

“Our testing would especially focus on nursing homes, schools and child-care centers,” he said.

During his remarks on Tuesday. Blunt called testing essential in the reopening of schools and the economy.

“All those things require tests that work, that are easily taken, that are quickly responded to,” he said. “Frankly, the president’s right when he says a test that you don’t know the result of for five or six or seven days doesn’t do nearly as much good as a test that you would know the result of in 15 or 20 minutes, and know how that impacts your life and everybody you’re going to be associating with.”

“Work is my No. 1 priority,” the Republican senator said. “I think that any further relief by Congress needs to focus on getting people back to work, getting the economy reopened, getting workers that job security back. I’m going to be opposed to anything that doesn’t do that.”

The U.S. House passed its relief package, the HEROES Act, on May 15, but the Senate did not take up the measure.

House Speaker Nancy Pelosi, a California Democrat, said the crisis has deepened with passage of the time between.

It took 100 days, she said, for Americans to reach 1 million coronavirus infections, 43 days to reach 2 million, 27 days to reach 3 million and now 16 days to hit 4 million.

“That acceleration is an assault on the lives and livelihoods of the American people,” Pelosi said Thursday.

Jim Neely is contesting the Republican Party nomination for governor against incumbent Gov. Mike Parson, Saundra McDowell and Raleigh Ritter. Neely is a U.S. Army veteran and a physician in Cameron, Missouri. The election is Tuesday, Aug. 4.

NORTH KANSAS CITY, Mo. — Jim Neely is running a tight-knit, community focused campaign; for the Cameron, Missouri, physician and decades-experienced public servant, there isn’t any other way to do it.

He’s pursuing a run for governor, the first from rural Northwest Missouri to seek the state’s top job in some time, with a message designed to advance conservative principles while hoping to leverage popular frustrations with what he labels typical Jefferson City politics. He took a moment at a campaign meet-and-greet event on Thursday to elaborate on this.

“We’ve got challenges and, you know what, the citizens see this,” he said. “There’s a relationship problem between taxpayers and government.”

Mike Larkin of Plattsburg, Missouri, a retired airline pilot for TWA, attended the Neely event on Thursday at Repeal the 18th Bar and Bistro in North Kansas City, Missouri, after following Neely’s career in public service for some time. Larkin said it is one of his most important values that the Show Me State be run by working professionals from rural America, preferably Northwest Missouri.

“It means everything,” Larkin said. “Everything. I have watched what goes on in Jeff City for 40 years, and none of us can be very happy with our state government. Bad politics seem to permeate, no matter what side you’re on.”

Beyond his service in the state legislature since his first election in 2012, Neely still practices medicine, serving assisted living facilities in local communities in association with the Cameron Regional Medical Center; he’s practiced medicine there since 1987.

He originally hails from Tarkio, Missouri, and moved at a young age to Forest City, Missouri. In his young adult life, Neely served in the U.S. Army as an infantry officer from 1974 to 1976, separating with the grade of first lieutenant. Neely was on the Cameron R-I school board from 1996 to 2005.

There’s no way to run a Republican campaign for governor these days without acknowledging the elephant in the room of COVID-19, and Neely is in a particular position to do that as a practicing medical doctor. He described himself as a skeptic of mandatory requirements for masks, of the like that apply in Jackson County where the Thursday event took place.

At the end of the day, Neely believes that rural leaders should push back on broad mandates. Those who feel compelled to wear masks to protect themselves and others should do so, he said, but this is not the government’s role to enforce.

“We need to be all going right back, back to the normal we had in January and February, back to work,” he said. “People will be happier and healthier.” 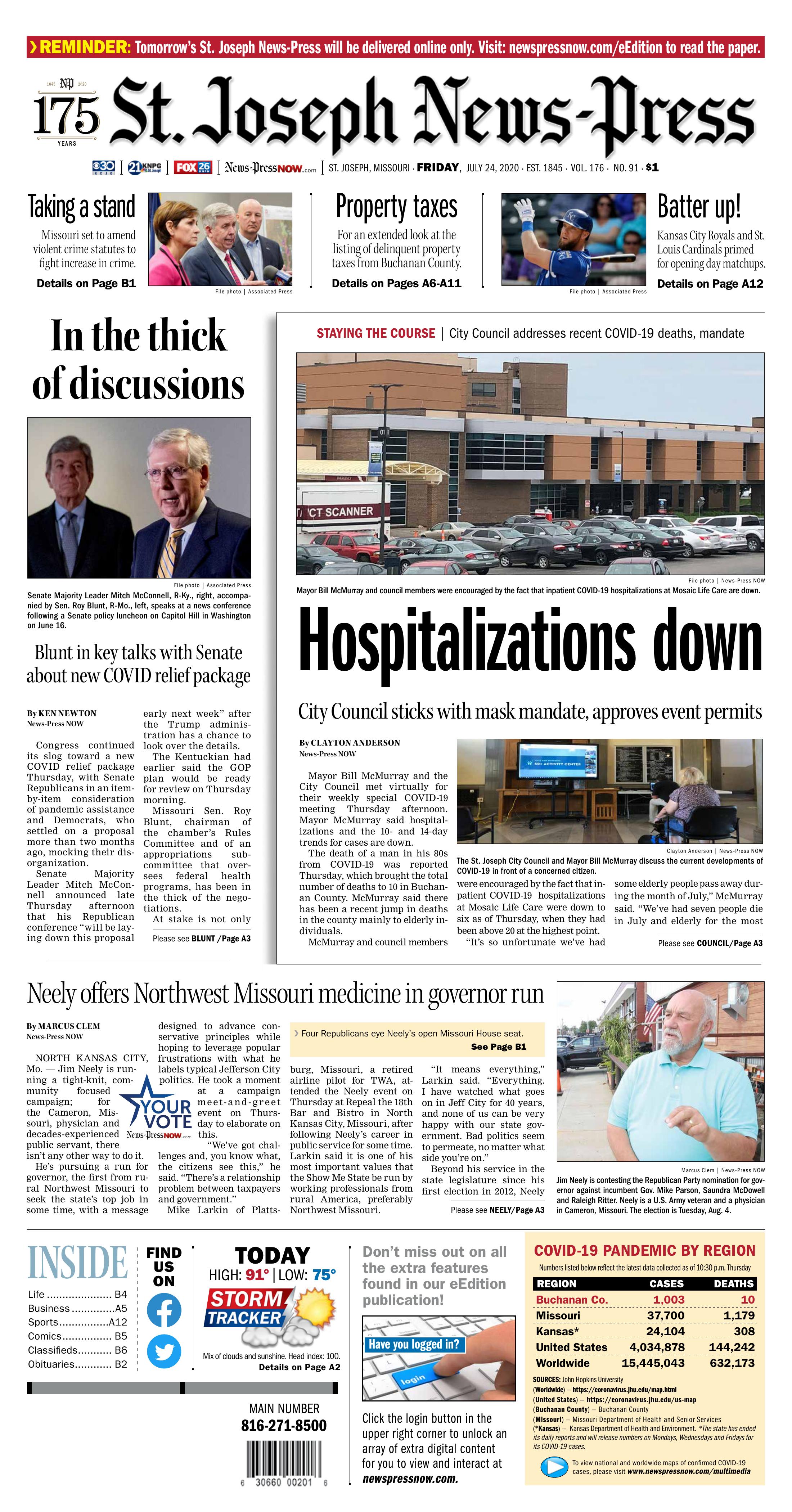