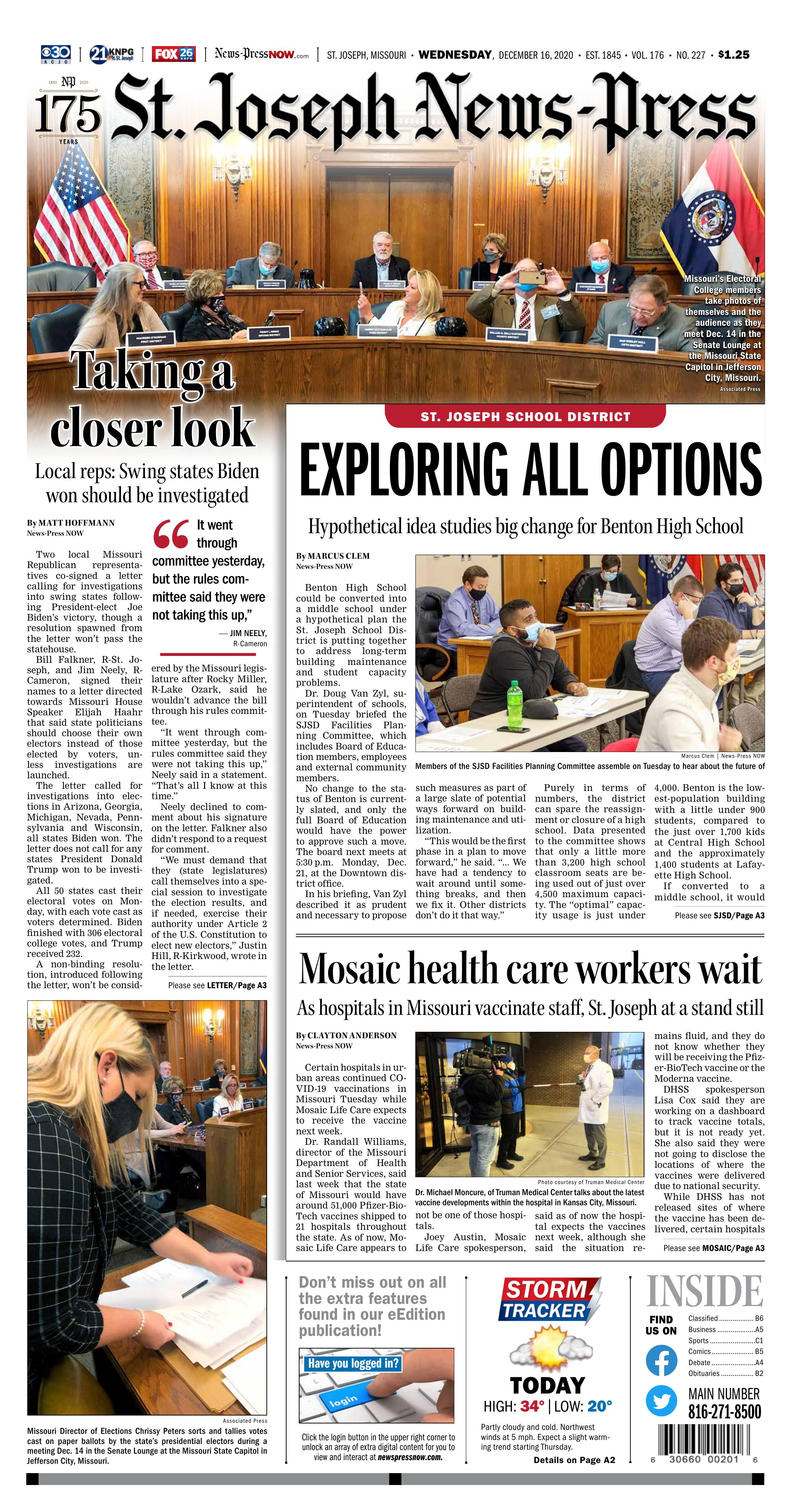 Missouri's Electoral College members take photos of themselves and the audience as they meet Monday, Dec. 14, 2020, in the Senate Lounge at the Missouri State Capitol in Jefferson City, Mo. Electors in all 50 states cast votes in line with what voters determined at the polls. No state legislatures substituted electors.

Missouri Director of Elections Chrissy Peters sorts and tallies votes cast on paper ballots by the state’s presidential electors during a meeting Dec. 14 in the Senate Lounge at the Missouri State Capitol in Jefferson City, Missouri.

Bill Falkner, R-St. Joseph, and Jim Neely, R-Cameron, signed their names to a letter directed towards Missouri House Speaker Elijah Haahr that said state politicians should choose their own electors instead of those elected by voters, unless investigations are launched.

The letter called for investigations into elections in Arizona, Georgia, Michigan, Nevada, Pennsylvania and Wisconsin, all states Biden won. The letter does not call for any states President Donald Trump won to be investigated.

All 50 states cast their electoral votes on Monday, with each vote cast as voters determined. Biden finished with 306 electoral college votes, and Trump received 232.

A non-binding resolution, introduced following the letter, won’t be considered by the Missouri legislature after Rocky Miller, R-Lake Ozark, said he wouldn’t advance the bill through his rules committee.

“It went through committee yesterday, but the rules committee said they were not taking this up,” Neely said in a statement. “That’s all I know at this time.”

Neely declined to comment about his signature on the letter. Falkner also didn’t respond to a request for comment.

“We must demand that they (state legislatures) call themselves into a special session to investigate the election results, and if needed, exercise their authority under Article 2 of the U.S. Constitution to elect new electors,” Justin Hill, R-Kirkwood, wrote in the letter.

The last time state legislatures picked their own electors was 1876, according to the Washington Post.

In Michigan and other states, the state legislature is specifically given the power to choose electors to the voting public.

Republican election officials in Georgia have said the election was secure and that no audit or recount would change the outcome of the election. Lawsuits claiming widespread voter fraud have failed, including lawsuits brought to the United States Supreme Court, which has rejected such suits.

Mitch McConnell, Congress’ top Republican and the Senate majority leader, congratulated Biden on his victory Tuesday in a floor speech.

According to Politico’s Jake Sherman, Sen. Roy Blunt, R-Missouri, is encouraging his colleagues to decline any objections to the electoral college vote and allow Biden’s victory to stand.

Congress has never rejected a state’s electoral college vote, and it’s unlikely an objection would be sustained because it must pass both the Senate and the House, which is controlled by Democrats.

Any objections must be signed in writing by both a member of the House and the Senate.

In 2017, Democratic representatives attempted to object to President Trump’s victory, but no Democratic senators joined the cause.

The last time both a House and Senate member signed an objection was 2005, and the objection failed in both chambers.

Dr. Doug Van Zyl speaks to the Facilities Planning Committee on Tuesday in the Board of Education room at the Downtown district office.

Members of the SJSD Facilities Planning Committee assemble on Tuesday to hear about the future of how the district uses buildings and when things may change.

Benton High School could be converted into a middle school under a hypothetical plan the St. Joseph School District is putting together to address long-term building maintenance and student capacity problems.

No change to the status of Benton is currently slated, and only the full Board of Education would have the power to approve such a move. The board next meets at 5:30 p.m. Monday, Dec. 21, at the Downtown district office.

In his briefing, Van Zyl described it as prudent and necessary to propose such measures as part of a large slate of potential ways forward on building maintenance and utilization.

“This would be the first phase in a plan to move forward,” he said. “... We have had a tendency to wait around until something breaks, and then we fix it. Other districts don’t do it that way.”

Purely in terms of numbers, the district can spare the reassignment or closure of a high school. Data presented to the committee shows that only a little more than 3,200 high school classroom seats are being used out of just over 4,500 maximum capacity. The “optimal” capacity usage is just under 4,000. Benton is the lowest-population building with a little under 900 students, compared to the just over 1,700 kids at Central High School and the approximately 1,400 students at Lafayette High School.

If converted to a middle school, it would support a similar number of kids in grades six through eight; the district is approaching a time in which all middle schools will begin admitting sixth graders. However, before it can do that, it needs to alleviate the middle school “bottleneck” overcapacity issue. There are just over 2,500 kids at the middle school level, in four buildings designed to support no more than about 2,100. An “optimal” population would be 1,940.

If all three high schools remain in current operations and maintenance needs are provided for, particularly installing air conditioning for all indoor spaces, the cost would be at least $20 million, the Facilities Planning Committee heard on Tuesday.

When the COVID-19 pandemic ends, some students are expected to remain in the all-online St. Joseph Schools Virtual Academy, but most are likely to return to regular schooling. In a sense, there is no time like the present to talk about how to distribute kids and where.

“I think the perfect scenario is the (new) middle school gets built, trust somehow comes back to the district and we just make progress from there,” board member Rick Gehring said in comments to the committee.

Dr. Michael Moncure, of Truman Medical Center talks about the latest vaccine developments within the hospital in Kansas City, Missouri.

Dr. Randall Williams, director of the Missouri Department of Health and Senior Services, said last week that the state of Missouri would have around 51,000 Pfizer-BioTech vaccines shipped to 21 hospitals throughout the state. As of now, Mosaic Life Care appears to not be one of those hospitals.

Joey Austin, Mosaic Life Care spokesperson, said as of now the hospital expects the vaccines next week, although she said the situation remains fluid, and they do not know whether they will be receiving the Pfizer-BioTech vaccine or the Moderna vaccine.

DHSS spokesperson Lisa Cox said they are working on a dashboard to track vaccine totals, but it is not ready yet. She also said they were not going to disclose the locations of where the vaccines were delivered due to national security.

While DHSS has not released sites of where the vaccine has been delivered, certain hospitals in Kansas City, such as Truman Medical Center and Saint Luke’s, have reported that they have received the vaccine.

Cox said U.S. Human Health Services recommended they did not disclose locations where the vaccine was so the public did not show up demanding the vaccine, which is currently only available to health care workers.

Monday night, Mosaic Life Care posted a video on Facebook of Chief Quality Officer Dr. Edward Kammerer explaining why the vaccine will not give people COVID-19 due to the nature of what the vaccine does.

“It is completely just synthetically genetically engineered to be a small segment of that of the virus genome,” Kammerer said in the video. “This will stimulate your cells to produce that spike protein resulting in immune response and further immunity towards COVID virus.”

News-Press NOW has submitted a request to Missouri DHSS regarding locations of the vaccine as well as how many total vaccines have been delivered.

Calls for investigation into swing states