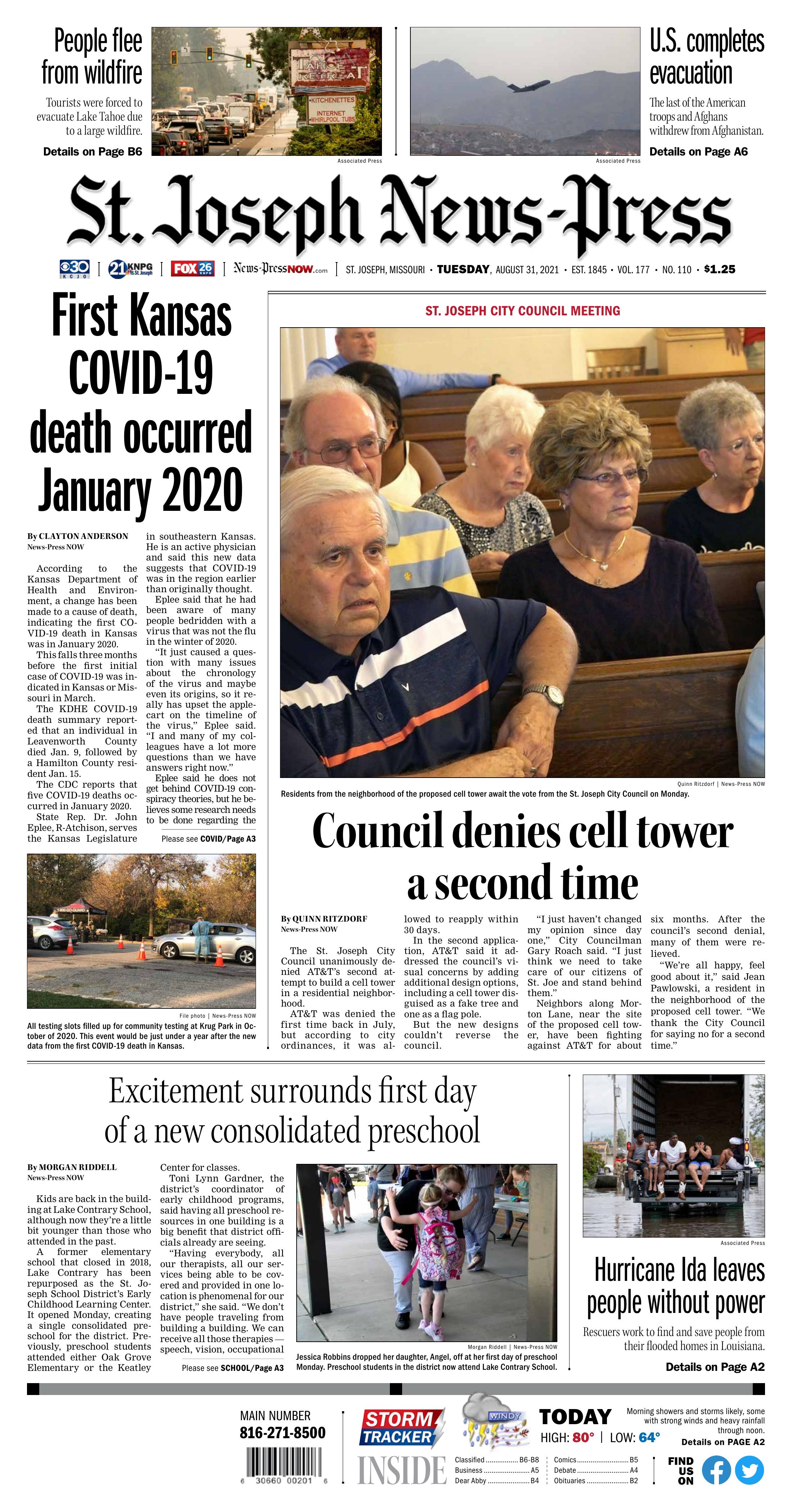 All testing slots filled up for community testing at Krug Park in October of 2020. This event would be just under a year after the new data from the first COVID-19 death in Kansas.

According to the Kansas Department of Health and Environment, a change has been made to a cause of death, indicating the first COVID-19 death in Kansas was in January 2020.

This falls three months before the first initial case of COVID-19 was indicated in Kansas or Missouri in March.

The CDC reports that five COVID-19 deaths occurred in January 2020.

State Rep. Dr. John Eplee, R-Atchison, serves the Kansas Legislature in southeastern Kansas. He is an active physician and said this new data suggests that COVID-19 was in the region earlier than originally thought.

Eplee said that he had been aware of many people bedridden with a virus that was not the flu in the winter of 2020.

“It just caused a question with many issues about the chronology of the virus and maybe even its origins, so it really has upset the applecart on the timeline of the virus,” Eplee said. “I and many of my colleagues have a lot more questions than we have answers right now.”

Eplee said he does not get behind COVID-19 conspiracy theories, but he believes some research needs to be done regarding the timeline of the virus.

“I will tell you this: We know this for a fact there were people getting sick in China in October of last year that were undiagnosed,” Eplee said.

The World Health Organization investigators stated 90 people were hospitalized in Beijing with coronavirus-like symptoms in October.

In Buchanan County, there have been no instances where coronavirus death cases have been reopened, according to medical examiner Dr. Adam Wineinger.

He said death cases do get reopened, and it is not uncommon. When dealing with COVID-19 death cases, a positive COVID-19 test is not necessarily needed to confirm.

“The criteria are just like any sort of infectious disease process, if they died from pneumonia that was caused from influenza, you just go down to the lowest common denominator ... and if it was pneumonia caused by the SARS virus, then they’re going to be classified as a COVID death,” Wineinger said.

There have also been examples where coroners have excluded writing COVID-19 as the cause of death on death certificates. An incident was reported where a coroner had done this in rural Macon County, Missouri, by the Kansas City Star earlier in August.

Residents from the neighborhood of the proposed cell tower await the vote from the St. Joseph City Council on Monday.

AT&T was denied the first time back in July, but according to city ordinances, it was allowed to reapply within 30 days.

In the second application, AT&T said it addressed the council’s visual concerns by adding additional design options, including a cell tower disguised as a fake tree and one as a flag pole.

But the new designs couldn’t reverse the council.

“I just haven’t changed my opinion since day one,” City Councilman Gary Roach said. “I just think we need to take care of our citizens of St. Joe and stand behind them.”

Neighbors along Morton Lane, near the site of the proposed cell tower, have been fighting against AT&T for about six months. After the council’s second denial, many of them were relieved.

“We’re all happy, feel good about it,” said Jean Pawlowski, a resident in the neighborhood of the proposed cell tower. “We thank the City Council for saying no for a second time.”

Kids are back in the building at Lake Contrary School, which closed in 2018 after years as an elementary school. It’s now the St. Joseph School District’s Early Childhood Learning Center.

Kids are back in the building at Lake Contrary School, although now they’re a little bit younger than those who attended in the past.

A former elementary school that closed in 2018, Lake Contrary has been repurposed as the St. Joseph School District’s Early Childhood Learning Center. It opened Monday, creating a single consolidated preschool for the district. Previously, preschool students attended either Oak Grove Elementary or the Keatley Center for classes.

Toni Lynn Gardner, the district’s coordinator of early childhood programs, said having all preschool resources in one building is a big benefit that district officials already are seeing.

“Having everybody, all our therapists, all our services being able to be covered and provided in one location is phenomenal for our district,” she said. “We don’t have people traveling from building a building. We can receive all those therapies — speech, vision, occupational therapy, physical therapy — all those things can happen right here.”

Not only are all these resources good for learning, but it also helps with the influx of young kids staff now will see every weekday.

“The amount of staff that we have on hand to be able to walk children into classrooms or assist with this process, I’m telling you, it’s amazing,” Gardner said. “Everybody has stepped up and done what they needed to do to help us be prepared for this next group of kiddos coming in.”

“For every bus that has more than five early childhood students on there, they do have an aide on that bus as well,” she said. “So that was great to have someone else there that could assist with making sure that every kiddo that’s in their seat is buckled in, those needing the safety harness and seat belt that they were in the correct seating and that kind of thing.”

Jessica Robbins was dropping her daughter, Angel, off on her first day of preschool Monday. She said this school location has a connection to her own childhood.

Samantha and Dameyna Armstrong dropped their daughter, Hailey, off on her first day, too. Hailey and Angel are cousins who lucked out with the opening of the consolidated school.

“I think they might have gone to different schools because we do live in different areas,” Samantha Armstrong said. “So if they didn’t move to here, there’s a possibility that our kids might be starting out without somebody they know.”

Not everyone is going into the new school with family, but Gardner said staff work to help anyone feeling nervous.

“We’ve had some mixed emotions, some that are very excited and ready to go play, and others that have a little bit of separation anxiety. So we have a lot of staff members here to help make that transition easier for them, both for the parents and the children,” she said. “So I think I saw a few tears from parents this morning, too, because, you know, this is their first time sending their little one off to school. So we want to assure them that this is going to be the best experience that they could possibly have.”