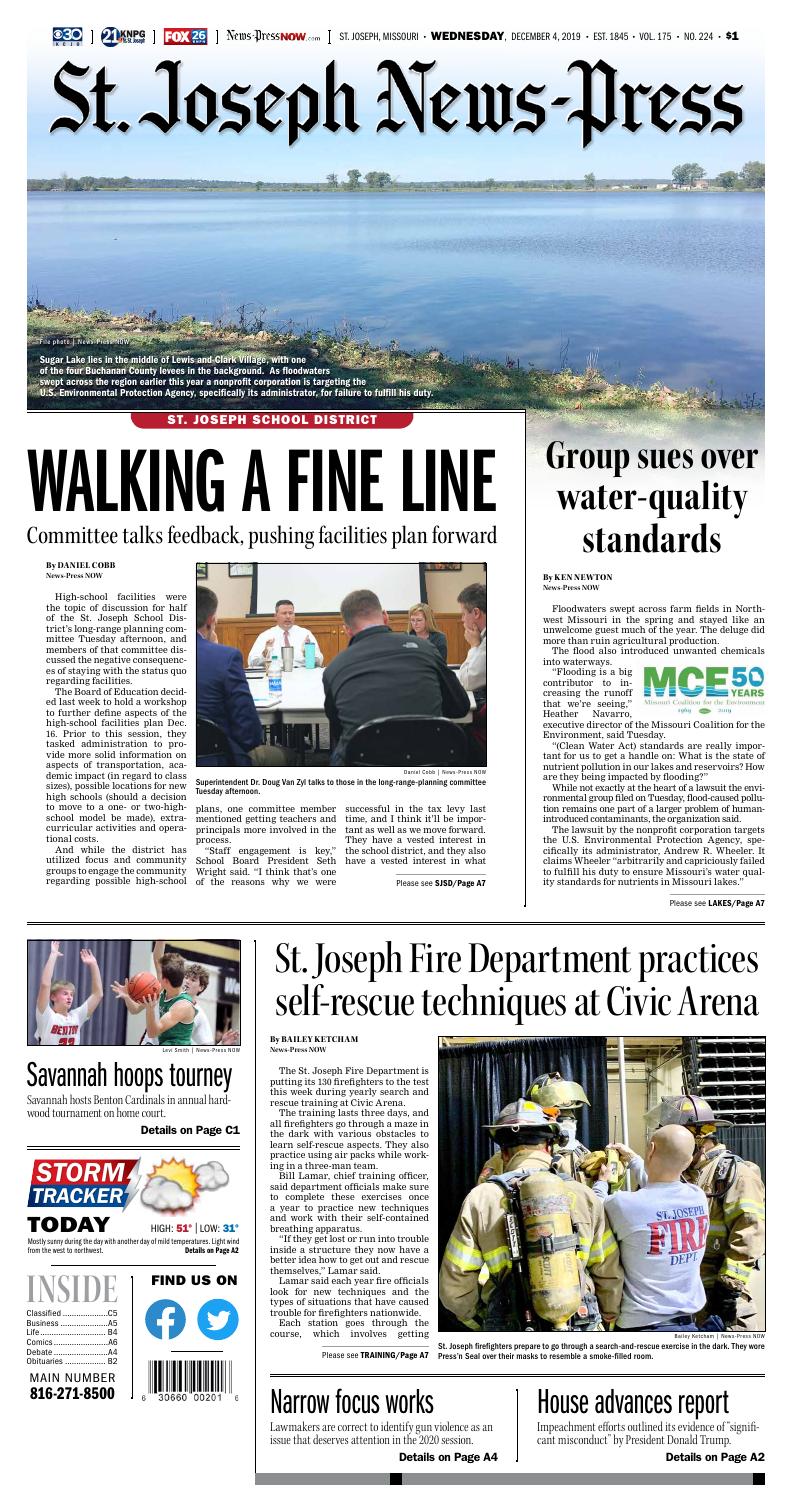 High-school facilities were the topic of discussion for half of the St. Joseph School District’s long-range planning committee Tuesday afternoon, and members of that committee discussed the negative consequences of staying with the status quo regarding facilities.

The Board of Education decided last week to hold a workshop to further define aspects of the high-school facilities plan Dec. 16. Prior to this session, they tasked administration to provide more solid information on aspects of transportation, academic impact (in regard to class sizes), possible locations for new high schools (should a decision to move to a one- or two-high-school model be made), extracurricular activities and operational costs.

And while the district has utilized focus and community groups to engage the community regarding possible high-school plans, one committee member mentioned getting teachers and principals more involved in the process.

“Staff engagement is key,” School Board President Seth Wright said. “I think that’s one of the reasons why we were successful in the tax levy last time, and I think it’ll be important as well as we move forward. They have a vested interest in the school district, and they also have a vested interest in what sort of model that we go to, and I think right now we’re having those discussions. There’s a lot of discussion going on about whether a one- or two-high-school model is the best academically, and I think that’s where we need some input from our teachers.”

Discussions continued on to the feedback the board has received on such plans, specifically negative comments online. And while some members of the committee discussed addressing those sooner rather than later, Wright disagreed, saying they need to filter out the noise to come up with a plan.

“There isn’t anything to defend yet. We need to come up with a plan and a proposal,” he said during the meeting. “I like to look at the bright side, and I like to see that people are engaged in the discussion.

“They clearly are not apathetic. So now that we have them engaged in the discussion, that’s our opportunity to educate them, and hopefully as we come forward with what the proposal will be from the board and the district, we have an opportunity then to show them why that plan is best, not only for the kids, but for this community.”

Positive communication will be key in the months to come, one board member said.

Wright said he has had many people ask why a new facility is the answer to the district’s problems, to which he replied, “It’s not the answer, but it’s definitely part of it.”

Should there be no change, Wright said, the consequences could be more dire.

“With declining enrollment, what are we looking at in the future?” he asked. “That’s really what this process is about. And so the question now is, ‘Can we sustain the status quo three-high-school model, and I think the data is telling us that’s going to be very difficult.”

When asked how that information can be relayed to voters, Wright said it’s a tightrope walk.

“It’s difficult to do. So on one hand, you’re going to be accused of threatening people if you’re talking about potentially closing schools. On the other hand, if you don’t have the discussion, then you’re going to be criticized for not discussing it with people and keeping them informed,” Wright said. “So I think we’ve just got to walk that fine line and let people know that this isn’t anything personal. It has nothing to do with a certain school or a certain part of town. This is really based upon the facts and data, and we’ve got to do — not necessarily what’s best for one school or one student, but for all 11,000 students and for this community.”

Readjusting boundary lines also was discussed during Tuesday’s meeting, to which Wright said he would like those discussions to begin sooner rather than later to help better utilize local schools and their space.

Furthermore, progress has been made on establishing a partner for increasing early learning opportunities within the district, though more information on just who that partner is or how much longer those discussions will take were unavailable.

St. Joseph firefighters prepare to go through a search-and-rescue exercise in the dark. They wore Press’n Seal over their masks to resemble a smoke-filled room.

St. Joseph firefighters crawl through a training obstacle course to practice self-rescue techniques. They participated in groups of three to practice teamwork.

The St. Joseph Fire Department is putting its 130 firefighters to the test this week during yearly search and rescue training at Civic Arena.

The training lasts three days, and all firefighters go through a maze in the dark with various obstacles to learn self-rescue aspects. They also practice using air packs while working in a three-man team.

Bill Lamar, chief training officer, said department officials make sure to complete these exercises once a year to practice new techniques and work with their self-contained breathing apparatus.

“If they get lost or run into trouble inside a structure they now have a better idea how to get out and rescue themselves,” Lamar said.

Lamar said each year fire officials look for new techniques and the types of situations that have caused trouble for firefighters nationwide.

Each station goes through the course, which involves getting through a stud wall and dealing with entanglements, such as phone lines.

“We’re really practicing on trying to self-rescue through a wall and getting through an entanglement on your back,” Lamar said.

The course also involves a large amount of teamwork for everyone participating. Lamar said on the job firefighters are always on a buddy system.

“You’re not doing anything by yourself and there’s folks outside that can come in and rescue you if you run into problems,” Lamar said.

Lamar and Kurt Fuehrer, another training officer, also decided to put Press’n Seal over the firefighters’ masks to resemble a smoke and make the training as real as possible.

The training also has a class portion, but Lamar said the majority of the firefighters participating in the course enjoy the hands-on experience.

“It gets pretty hot, but it’s really needed for the work they do,” Lamar said.

Lamar said he hopes the training reflects positively when firefighters are out dealing with real-life situations.

Benton senior Bryson Conner and sophomore Carson Newlon defend a driving Smithville player during their game in their Savannah Tournament on Tuesday at Savannah High School.

Floodwaters swept across farm fields in Northwest Missouri in the spring and stayed like an unwelcome guest much of the year. The deluge did more than ruin agricultural production.

“Flooding is a big contributor to increasing the runoff that we’re seeing,” Heather Navarro, executive director of the Missouri Coalition for the Environment, said Tuesday.

“(Clean Water Act) standards are really important for us to get a handle on: What is the state of nutrient pollution in our lakes and reservoirs? How are they being impacted by flooding?”

While not exactly at the heart of a lawsuit the environmental group filed on Tuesday, flood-caused pollution remains one part of a larger problem of human-introduced contaminants, the organization said.

The lawsuit by the nonprofit corporation targets the U.S. Environmental Protection Agency, specifically its administrator, Andrew R. Wheeler. It claims Wheeler “arbitrarily and capriciously failed to fulfill his duty to ensure Missouri’s water quality standards for nutrients in Missouri lakes.”

According to the coalition’s petition, excessive amounts of nitrogen and phosphorus degrade water quality, particularly through their fostering of oxygen-choking algae. The runoff at issue comes largely from agricultural activities and some wastewater facilities.

The Missouri Department of Natural Resources adopted nutrient standards for lakes in 2009, guidelines struck down by the EPA two years later. By 2016, the Missouri Coalition sued the state for failing to act in creating standards, and a consent decree resulted.

Last December, the EPA approved a set of guidelines that the coalition called largely the same as the ones rejected in 2011. The lawsuit Tuesday aimed at this EPA action.

“It’s kind of a unique artifact of what they call ‘cooperative federalism’ that we’re suing (the) EPA rather than DNR,” Elizabeth Hubertz, director of Washington University Interdisciplinary Environmental Clinic, said Tuesday.

The “arbitrary and capricious” language comes from that 1946 legislation, which also focuses on abuses of discretion and general actions that run contrary to existing law.

“We certainly think that EPA’s approval of the standards meets those qualifications,” Hubertz said.

Navarro said the environmental group found the lawsuit, filed in the U.S. District Court in Jefferson City, a necessary step.

“This lawsuit is about protecting the health of our waterways and the people who depend on them,” she said. “Missourians deserve clean water and they deserve standards that are based in science and are designed to protect the environment and human health.”

No comment was available Tuesday from the EPA or DNR, the Associated Press reported. 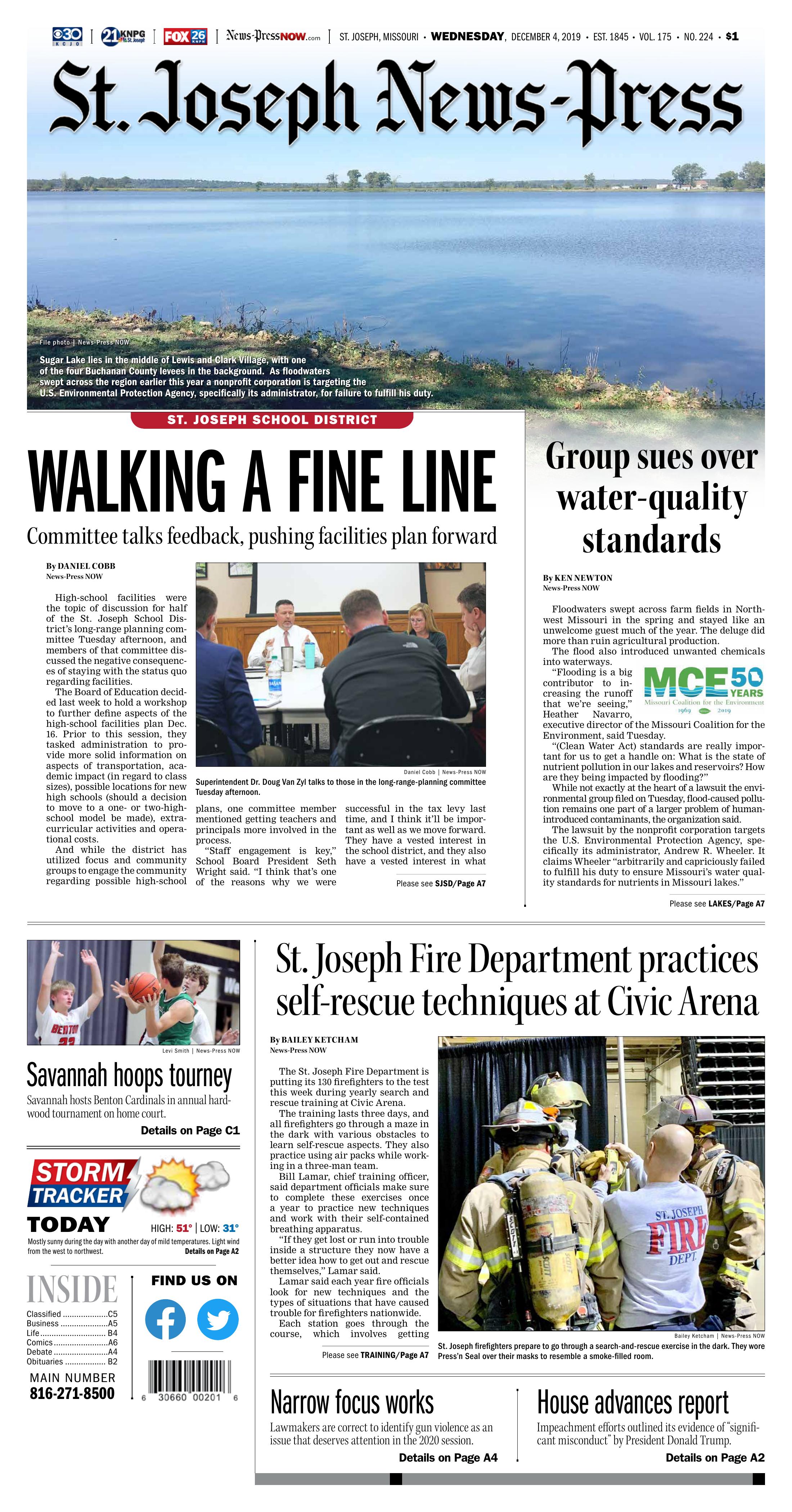