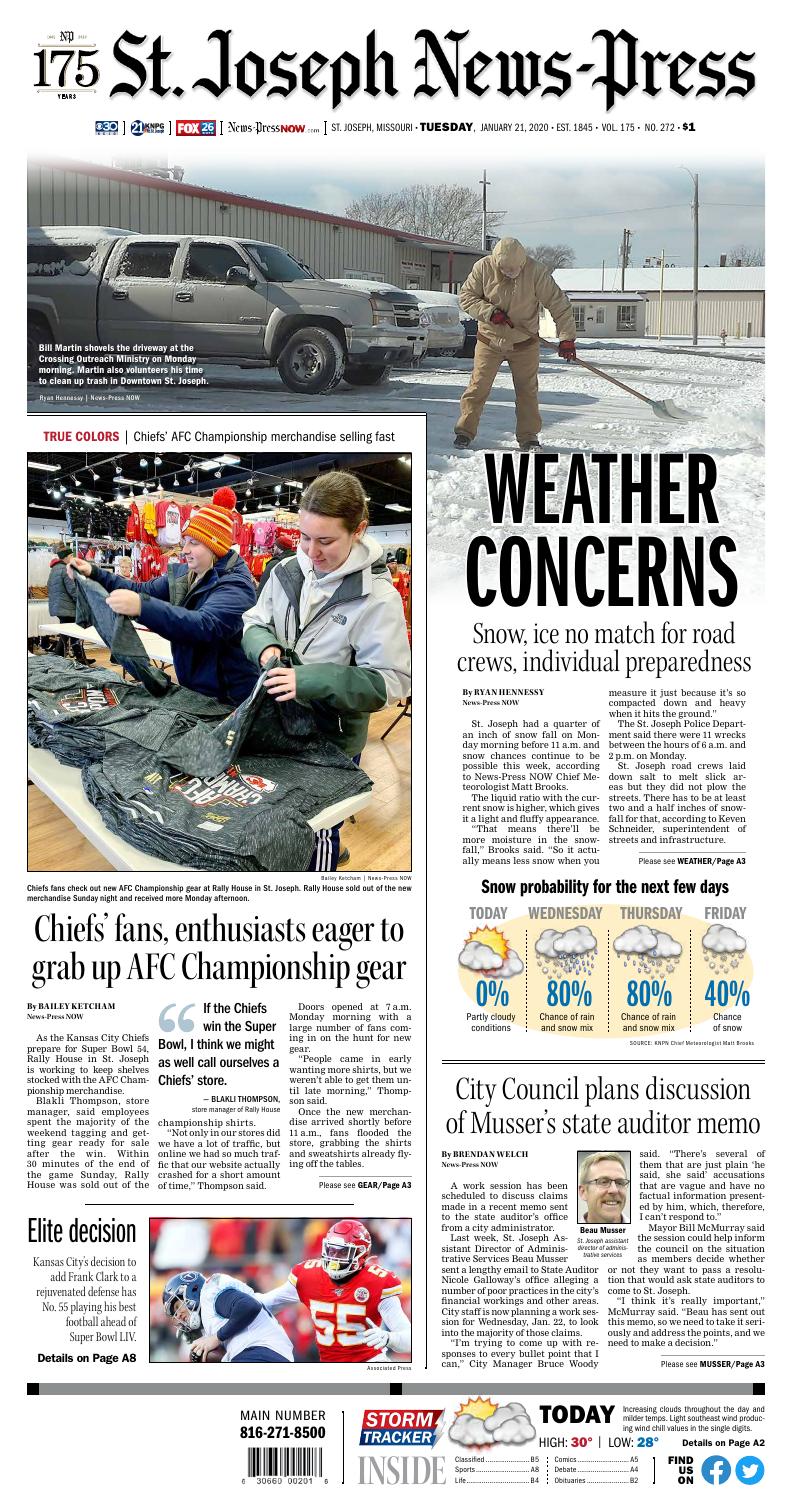 As the Kansas City Chiefs prepare for Super Bowl 54, Rally House in St. Joseph is working to keep shelves stocked with the AFC Championship merchandise.

Blakli Thompson, store manager, said employees spent the majority of the weekend tagging and getting gear ready for sale after the win. Within 30 minutes of the end of the game Sunday, Rally House was sold out of the

“Not only in our stores did we have a lot of traffic, but online we had so much traffic that our website actually crashed for a short amount of time,” Thompson said.

Doors opened at 7 a.m. Monday morning with a large number of fans coming in on the hunt for new gear.

“People came in early wanting more shirts, but we weren’t able to get them until late morning,” Thompson said.

Once the new merchandise arrived shortly before 11 a.m., fans flooded the store, grabbing the shirts and sweatshirts already flying off the tables.

“Up until the Super Bowl we plan to get all sorts of shirts, hoodies, long-sleeves, women and youth styles, and eventually we’ll get more glasses and pennants,” Thompson said.

Constant chanting of “Go Chiefs” was heard throughout the store by various fans. Michael Soden has been a Chiefs supporter for as long as he can remember.

“I was overjoyed when they won because we’ve earned it, and I’m going to wear my AFC shirt until it’s got holes in it,” Soden said.

Lisa and Jennifer Bransfield are among the many who have waited the majority of their lives for this moment.

“We actually had a sweatshirt that said ‘Just one more before I go’,” Lisa Bransfield said. “We bought enough stuff that I had to ask for a payment plan.”

Thompson expects the store to stay busy until the Super Bowl and is excited for what could happen.

“If the Chiefs win the Super Bowl, I think we might as well call ourselves a Chiefs’ store,” Thompson said. “I think the atmosphere in here is going to change drastically, and I think it’s going to be 100% bigger than the Royals winning the World Series.” 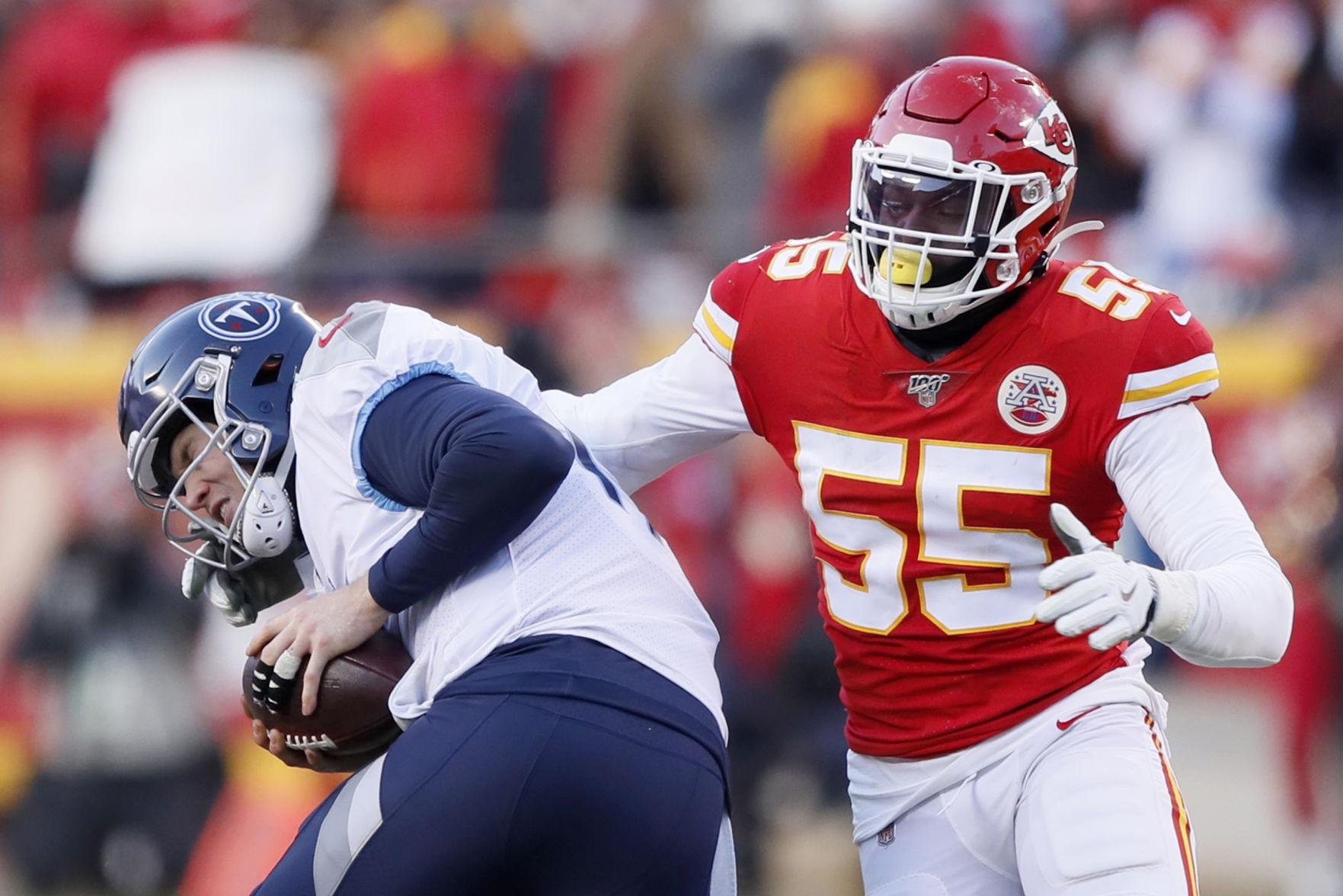 Kansas City Chiefs’ Frank Clark tries to stop Tennessee Titans quarterback Ryan Tannehill during the AFC Championship on Sunday at Arrowhead Stadium. The Chiefs converted $5 million of Clark’s base salary to a signing bonus in a much-needed transaction to provide cap space.

Bill Martin shovels the driveway at the Crossing Outreach Ministry on Monday morning. Martin also volunteers his time to clean up trash in Downtown St. Joseph.

St. Joseph had a quarter of an inch of snow fall on Monday morning before 11 a.m. and snow chances continue to be possible this week, according to News-Press NOW Chief Meteorologist Matt Brooks.

The liquid ratio with the current snow is higher, which gives it a light and fluffy appearance.

“That means there’ll be more moisture in the snowfall,” Brooks said. “So it actually means less snow when you measure it just because it’s so compacted down and heavy when it hits the ground.”

The St. Joseph Police Department said there were 11 wrecks between the hours of 6 a.m. and 2 p.m. on Monday.

St. Joseph road crews laid down salt to melt slick areas but they did not plow the streets. There has to be at least two and a half inches of snowfall for that, according to Keven Schneider, superintendent of streets and infrastructure.

“If anyone has any trouble with their street concerns don’t hesitate to call us at 816-271-4848,” Schneider said. “If we think we’ve been there already, we’ll send a supervisor to make sure we didn’t miss it.”

“Otherwise you’re looking at ice scraping and if it’s thick, it’s going to take you awhile,” said Bill Schreck, Westlake Ace Hardware assistant manager. “This last ice has been hard to get rid of, so we’ve sold quite a bit of the ice melt.”

Depending on the amount of salt needed, bags at Westlake range from around $6 for 10 pounds and $17 for 50 pounds. Cans of de-icer are around $4.

St. Joseph Assistant Director of Administrative Services Beau Musser sent a letter to the State Auditor's office last week alleging a number of accounting deficiencies and irregularities at City Hall. The City Council is now planning to hold a work session on Wednesday to hear what the City Staff has to say about those claims.

A work session has been scheduled to discuss claims made in a recent memo sent to the state auditor’s office from a city administrator.

Last week, St. Joseph Assistant Director of Administrative Services Beau Musser sent a lengthy email to State Auditor Nicole Galloway’s office alleging a number of poor practices in the city’s financial workings and other areas. City staff is now planning a work session for Wednesday, Jan. 22, to look into the majority of those claims.

“I’m trying to come up with responses to every bullet point that I can,” City Manager Bruce Woody said. “There’s several of them that are just plain ‘he said, she said’ accusations that are vague and have no factual information presented by him, which, therefore, I can’t respond to.”

Mayor Bill McMurray said the session could help inform the council on the situation as members decide whether or not they want to pass a resolution that would ask state auditors to come to St. Joseph.

“I think it’s really important,” McMurray said. “Beau has sent out this memo, so we need to take it seriously and address the points, and we need to make a decision.”

Councilman Brian Myers already has requested such a resolution be placed on the council’s Monday, Jan. 27, agenda. Woody said he would like to get a feel for what more members of the council are thinking first, though the resolution can be placed with just one request.

“I would certainly prefer to have more requesting that, but I try to be responsive to all councilmembers,” Woody said.

McMurray said his instinct is to vote yes on the resolution, but he wants more information first.

“I’m inclined to vote for something like that, but before I would vote for it I would want to hear the other side of the story,” McMurray said.

He said he does not believe all of Musser’s claims are accurate and brought up a line from the email that alleges that he “defamed” Musser by claiming he “plugged numbers” in financial reports that he provides to the council.

“Even at first blush I can see, well, I don’t think this is all accurate,” McMurray said. “For example, I did not defame him at a meeting, as he claimed at one point, and with the whole sewer billing thing, Beau himself, in November, said things are improving.”

In 2007, a petition led to the city receiving a state audit. That audit did not lead to any major findings but did recommend that city officials better document when funds are moved in order to be more transparent, according to a News-Press story at the time. Then-State Auditor Susan Montee criticized the city for transferring money between funds without explaining why, and claimed that, in some cases, the money shouldn’t have been moved.

“The City Council was pretty aghast at that last time and, after some back and forth, I believe there was a settlement on a much lower number, somewhere in the range of about $80,000, as I remember,” Woody said.

Wednesday’s work session is scheduled for 6 p.m. in the fourth-floor conference room at City Hall.

The state auditor's report on St. Joseph city government could be distilled into two key words: documentation and justification. More than a year after the audit began, Missouri State Auditor Susan Montee presented her office's 72-page report Tuesday night to the public at Missouri Western State University. The report advised the city on how to better manage its finances and decision-making processes in 14 areas. In each one, the primary recommendation was for the city to provide more documentation so it could justify its practices. 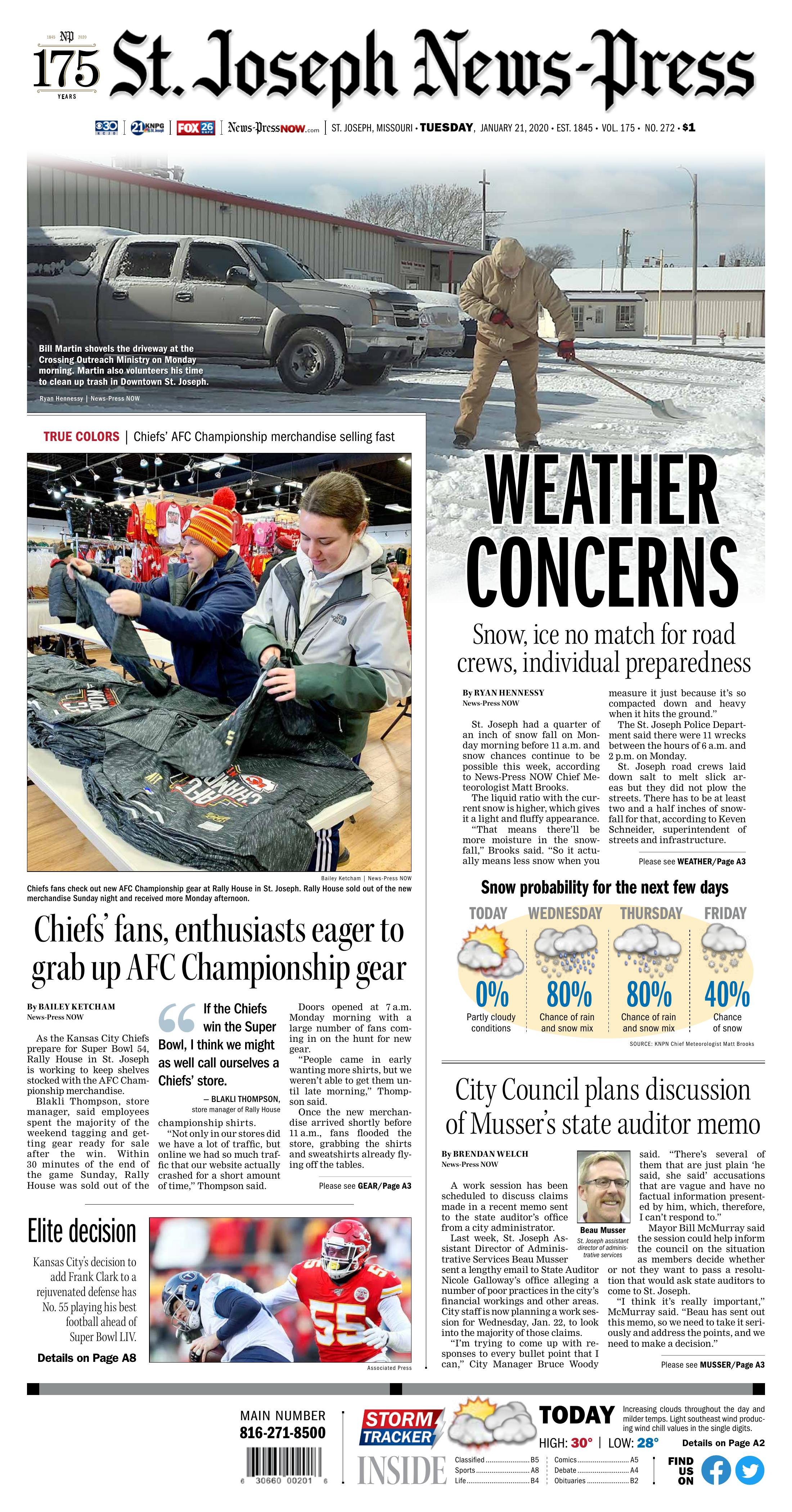 VIDEO: Melt the ice during the freeze