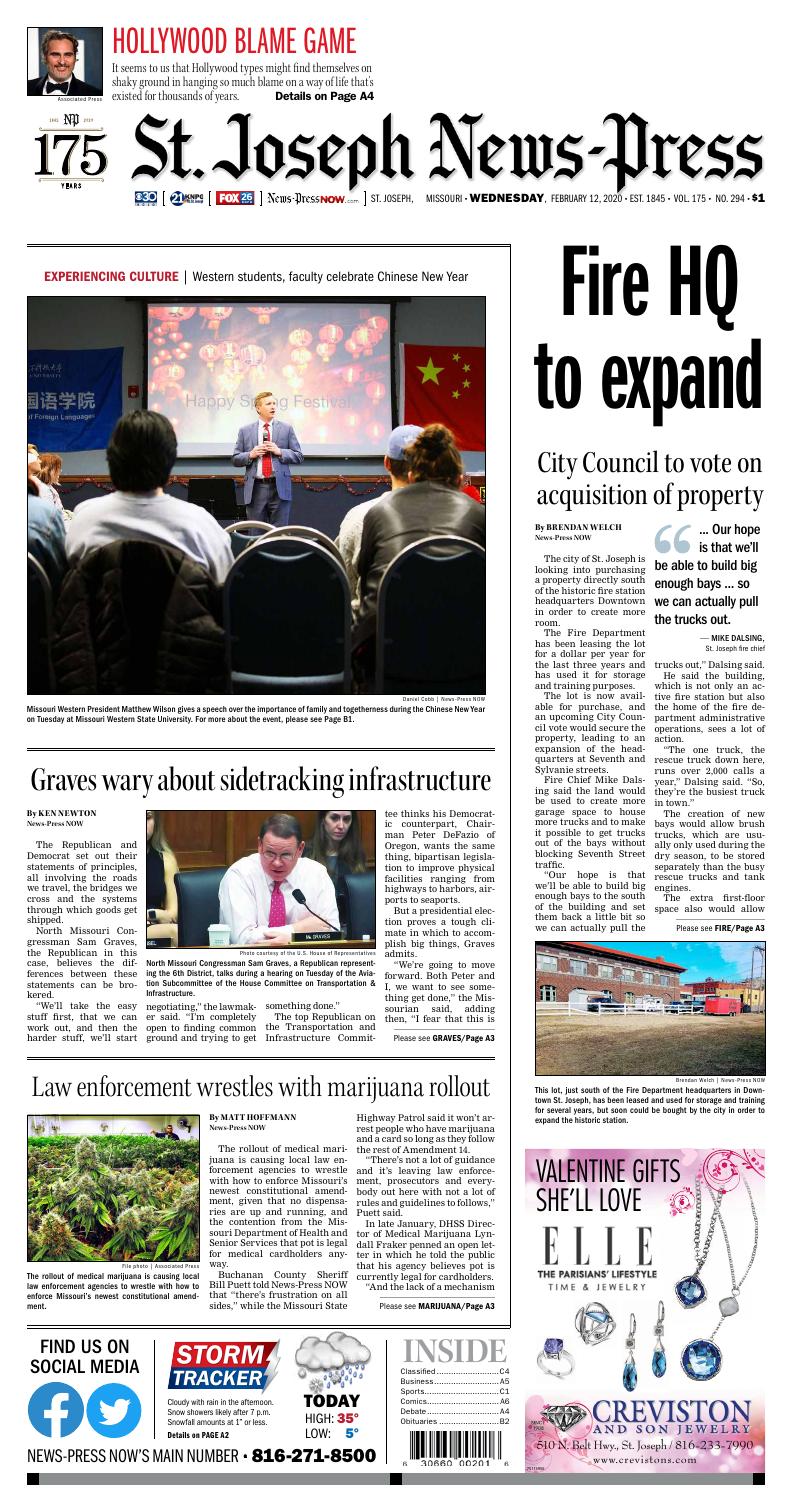 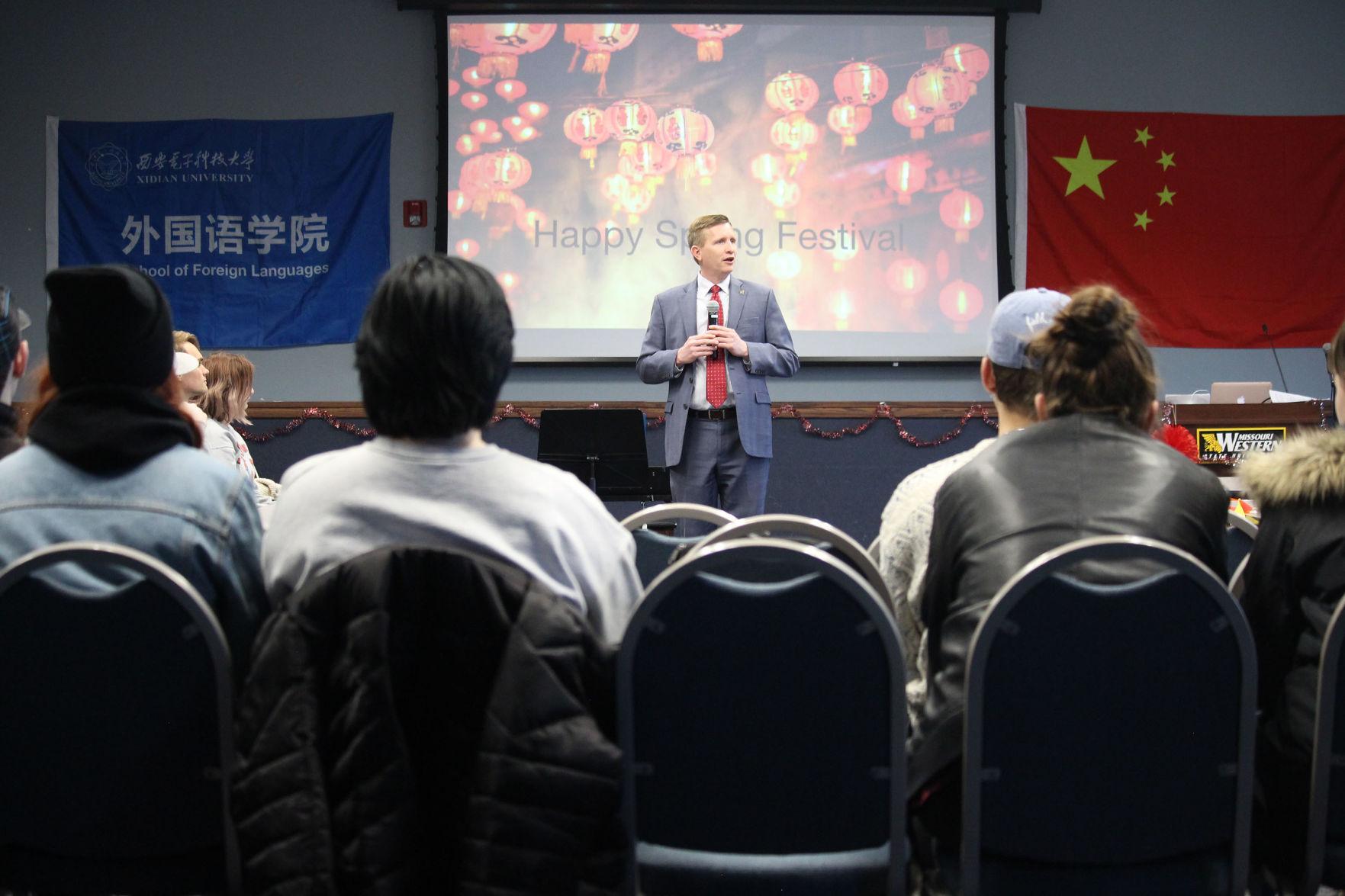 Missouri Western President Matthew Wilson gives a speech over the importance of family and togetherness during the Chinese New Year on Tuesday at Missouri Western State University. For more about the event, please see Page B1.

North Missouri Congressman Sam Graves, a Republican representing the 6th District, talks during a hearing on Tuesday of the Aviation Subcommittee of the House Committee on Transportation & Infrastructure.

The Republican and Democrat set out their statements of principles, all involving the roads we travel, the bridges we cross and the systems through which goods get shipped.

North Missouri Congressman Sam Graves, the Republican in this case, believes the differences between these statements can be brokered.

“We’ll take the easy stuff first, that we can work out, and then the harder stuff, we’ll start negotiating,” the lawmaker said. “I’m completely open to finding common ground and trying to get something done.”

The top Republican on the Transportation and Infrastructure Committee thinks his Democratic counterpart, Chairman Peter DeFazio of Oregon, wants the same thing, bipartisan legislation to improve physical facilities ranging from highways to harbors, airports to seaports.

But a presidential election proves a tough climate in which to accomplish big things, Graves admits.

“We’re going to move forward. Both Peter and I, we want to see something get done,” the Missourian said, adding then, “I fear that this is going to be about politics and not about the country’s needs.”

In an interview with the News-Press NOW on Tuesday, Graves said he worries that timing will spoil any chance of getting meaningful infrastructure legislation approved in Congress and to President Trump’s desk.

“(That’s) one month before the election, and the president has said that he wants to get an infrastructure package, or a surface transportation package, which means he’s got his name all over it,” Graves said.

House Speaker Nancy Pelosi, a California Democrat who recently led an impeachment move against Trump, will not want to hand a high-profile victory to the president.

“She isn’t going to want to accommodate that. That’s the thing that worries me more than anything else,” the Missouri representative said.

Addressing the long-term sustainability of the Highway Trust Fund.

Incorporating technology in the improvement of infrastructure.

Reduction of red tape in project review and delivery.

Remembering the needs of rural communities when planning projects.

Ensuring state flexibility in projects as opposed to top-down mandates.

In Trump’s Fiscal 2021 budget proposal, released Monday, the White House requested $1 trillion for infrastructure improvements over the next decade.

About $810 billion of that would be for the 10-year reauthorization for surface transportation programs.

Broken down, this request includes $602 billion for highway projects, $20 billion for road safety programs (traffic and motor carrier) and $17 billion for rail infrastructure, among other items.

Graves said funding has to be based in reality.

“We have to take care of infrastructure, but at the same time, we can’t break the bank,” he said.

The rollout of medical marijuana is causing local law enforcement agencies to wrestle with how to enforce Missouri’s newest constitutional amendment.

The rollout of medical marijuana is causing local law enforcement agencies to wrestle with how to enforce Missouri’s newest constitutional amendment, given that no dispensaries are up and running, and the contention from the Missouri Department of Health and Senior Services that pot is legal for medical cardholders anyway.

Buchanan County Sheriff Bill Puett told News-Press NOW that “there’s frustration on all sides,” while the Missouri State Highway Patrol said it won’t arrest people who have marijuana and a card so long as they follow the rest of Amendment 14.

“There’s not a lot of guidance and it’s leaving law enforcement, prosecutors and everybody out here with not a lot of rules and guidelines to follows,” Puett said.

In late January, DHSS Director of Medical Marijuana Lyndall Fraker penned an open letter in which he told the public that his agency believes pot is currently legal for cardholders.

“And the lack of a mechanism by which those individuals may legally come into possession of medical marijuana does not change their right to possess it,” Fraker said in the email.

Puett said the Missouri Sheriff’s Association has not issued a formal legal opinion, nor has the state’s attorney general. He added that the DHSS opinion is nonbinding, and therefore his department is taking arrests on a case-by-case basis.

He told News-Press NOW that he has not issued a formal directive to his deputies, and that he hasn’t spoken with Buchanan County Prosecuting Attorney Ron Holliday about the issue.

Highway Patrol Capt. John Hotz told News-Press NOW that the patrol wouldn’t arrest people for possessing marijuana if they had a medical card, so long as the person in question followed all the requirements of Amendment 14.

Missouri’s courts have yet to weigh in on the issue, though an opinion could be coming. The case of a Daviess County man who was arrested for possession even though he had a card appears to be moving forward.

The man’s lawyers previously told News-Press NOW that they may appeal to a higher court if recently filed motions don’t go their way. An appeals court ruling would be binding onto the lower courts, they said.

Fraker is set to testify before a Missouri House committee on Wednesday about the rollout of medical marijuana.

This lot, just south of the Fire Department headquarters in Downtown St. Joseph, has been leased and used for storage and training for several years, but soon could be bought by the city in order to expand the historic station.

The city of St. Joseph is looking into purchasing a property directly south of the historic fire station headquarters Downtown in order to create more room.

The Fire Department has been leasing the lot for a dollar per year for the last three years and has used it for storage and training purposes.

The lot is now available for purchase, and an upcoming City Council vote would secure the property, leading to an expansion of the headquarters at Seventh and Sylvanie streets.

Fire Chief Mike Dalsing said the land would be used to create more garage space to house more trucks and to make it possible to get trucks out of the bays without blocking Seventh Street traffic.

“Our hope is that we’ll be able to build big enough bays to the south of the building and set them back a little bit so we can actually pull the trucks out,” Dalsing said.

He said the building, which is not only an active fire station but also the home of the fire department administrative operations, sees a lot of action.

“The one truck, the rescue truck down here, runs over 2,000 calls a year,” Dalsing said. “So, they’re the busiest truck in town.”

The creation of new bays would allow brush trucks, which are usually only used during the dry season, to be stored separately than the busy rescue trucks and tank engines.

The extra first-floor space also would allow some of the upstairs offices to come downstairs in order to be more easily accessed by the public.

“The best thing for us would be the fact that we would be able to use the old building and move everything downstairs so that it will be ADA accessible,” Dalsing said.

He said there are times now where people who cannot climb the stairs have to call or alert fire staff that they are there so that someone can come down the stairs to help them.

The new bays, according to Dalsing, would accent the look of the historic headquarters building and would fit federal guidelines for updating a historic structure.

The City Council is expected to vote on whether or not to purchase the lot for $39,400 at their Feb. 24 meeting. 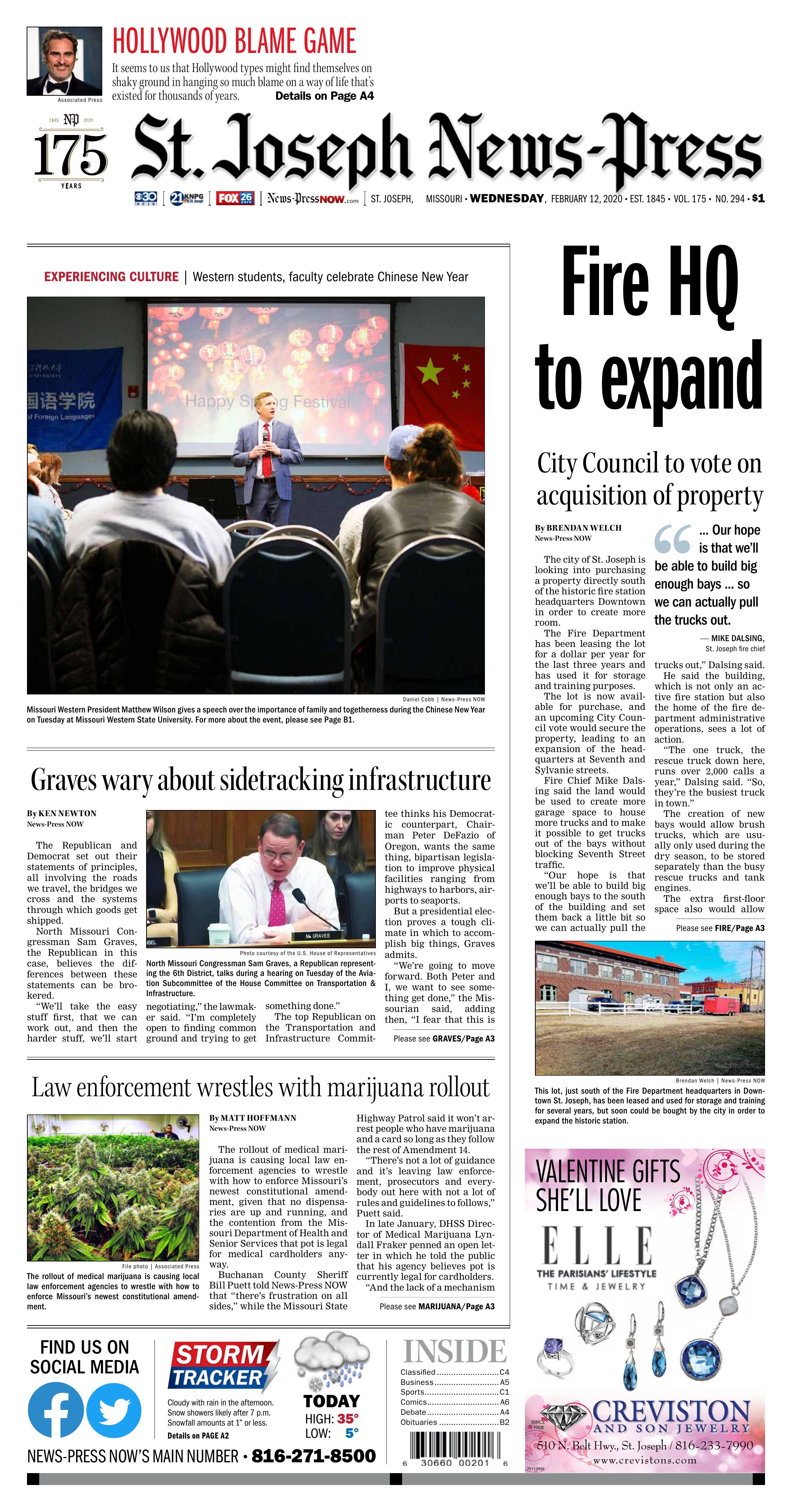