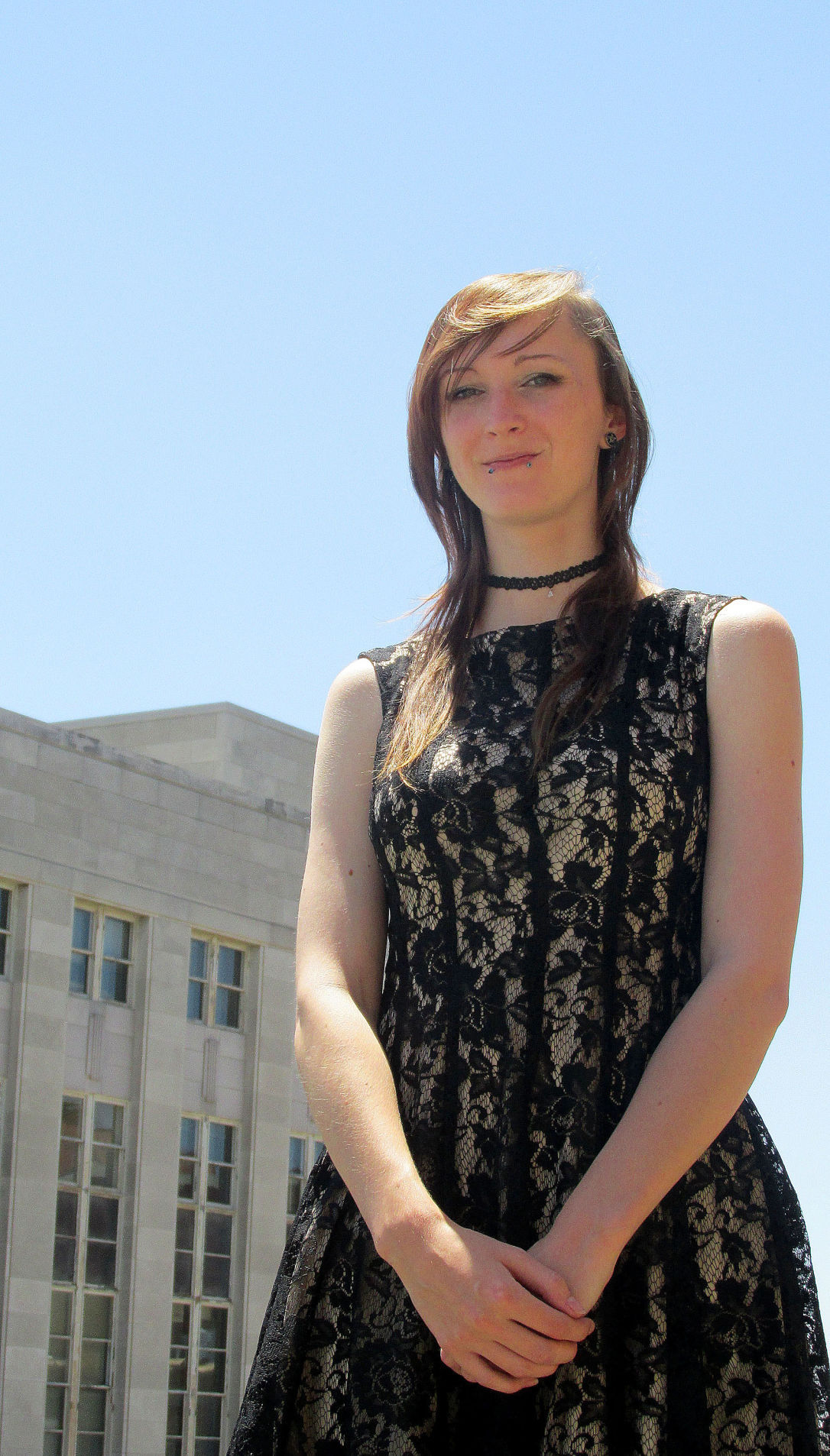 Brittany Losensky, a graphic designer from Cameron, Missouri, and a May graduate of Missouri Western State University, has given an artist’s eye to a great scientific spectacle, the solar eclipse of 2017. 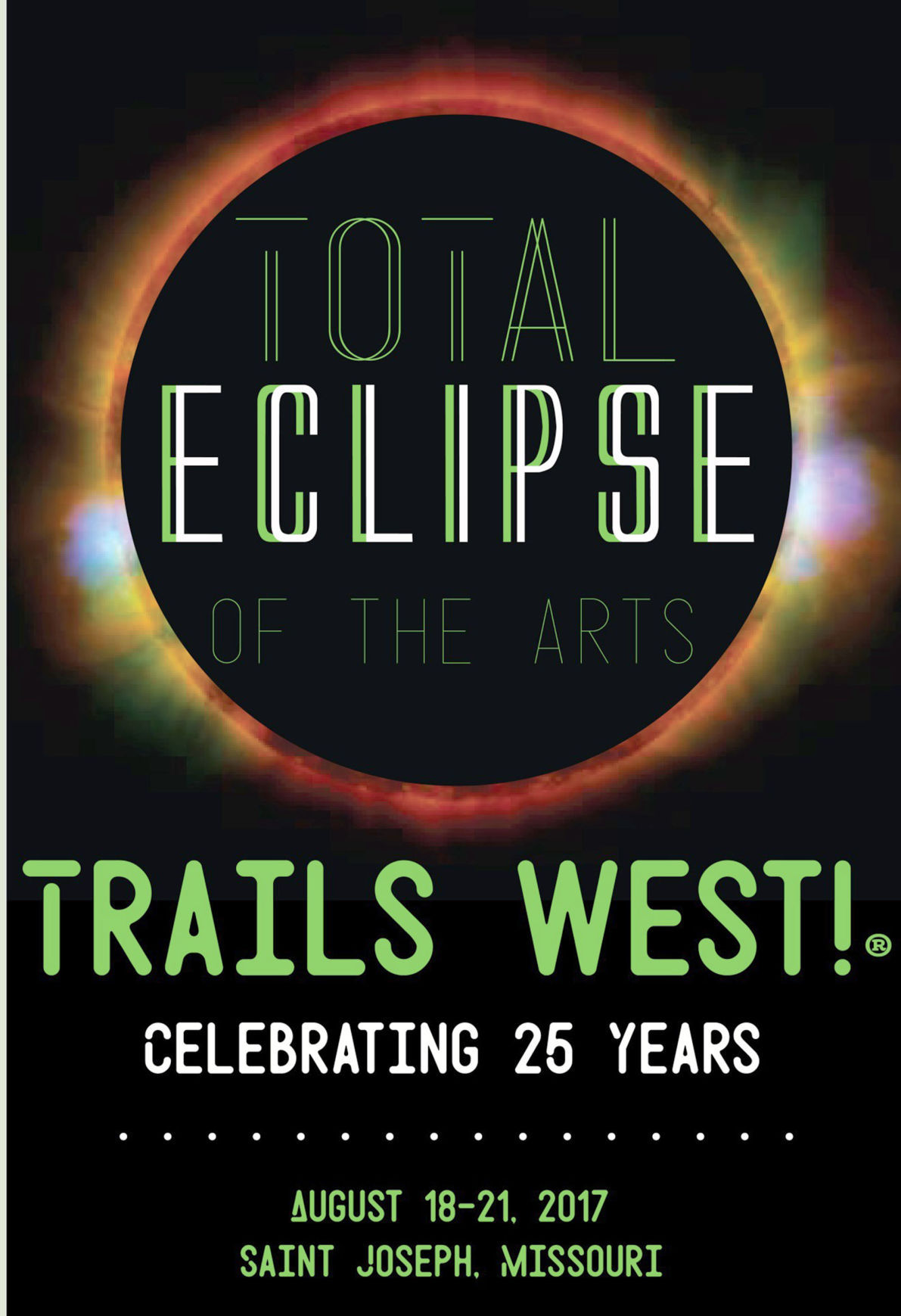 Brittany Losensky did research on the science of an eclipse before designing the Trails West! logo that pays homage to the celestial event.

Brittany Losensky, a graphic designer from Cameron, Missouri, and a May graduate of Missouri Western State University, has given an artist’s eye to a great scientific spectacle, the solar eclipse of 2017.

Brittany Losensky did research on the science of an eclipse before designing the Trails West! logo that pays homage to the celestial event.

Look closely at the moon, Brittany Losensky’s grandmother always told her. There’s a man in there.

Even as a girl, the artist would follow the direction, look into the night sky and think, “If there’s a man in the moon, he must be awfully lonely.”

Losensky laughs, thinking back. But the image stuck, and all that exists beyond earthly bounds remained a fascination. But especially the moon, with a human attendance or not.

This August, the lunar body makes of itself a special show, dashing on a path between our planet and the sun. Northwest Missouri, by celestial happenstance, resides in the alley of totality, the blackest portion of blackout.

True, scientists celebrate this event, an astronomical marvel and research trove packed into two minutes and 38 seconds, at least in this neighborhood.

But what will this phenomenon look like through the eyes of an artist? Losensky has some ideas.

A graphic designer from Cameron, Missouri, she already has worked through it, designing the “Total Eclipse of the Arts” logo for the St. Joseph Allied Arts Council and the Trails West! festival.

Losensky got her inspiration for a spectacle centered on darkness by thinking about the rich palette she imagined of distant galaxies.

“I really thought of many bright colors. Kind of an aura. Really smoothly blended colors,” she says “There’s always something about space. It’s absolutely mysterious. It’s almost a bit romantic.”

Losensky’s artistic instincts, she insists, emerged the first time she picked up a crayon.

“My mother liked to make the joke that ever since I was little, she’d have to have a coloring book no matter where we were going,” the artist says. “As soon as we left the driveway, I was already in my coloring book.”

By the time Losensky went to middle school, she had been taken into an art program that offered advanced techniques. She adapted it to it nicely, and a substitute teacher would be taken by surprise in the students’ work making stained glass ornaments.

“She would come in and I would be cutting glass and sticking it on the grinder, and I’ve got my safety goggles on,” the artist recalls. “And I’m just a little kid around broken glass.”

After graduation from Cameron High School, Losensky attended Missouri Western State University, where she got a degree in graphic design in May.

At the St. Joseph campus, she cultivated a style that embraces all things vintage and incorporates old-school illustration with a contemporary feel.

She conceives her ideas with a sketchbook in hand, then scans drawings into computer programs. Her photography work also gets called in, an image from a trip to Europe providing a silhouette against a neon purple background in a design promoting a 2015 conference.

A brochure made the rounds soliciting a design for the eclipse-themed St. Joseph festival. Teresa Harris, an art professor and director of graphic design at Missouri Western, urged her student to make a submission.

“She would always encourage us to do more, not just do your homework but get out there,” Losensky says of Harris. “She was the most inspiring person I’ve ever worked with.”

The design went through several versions, one of earth tones and another with otherworldly red lettering. In the end, the one selected displays the eclipse in its full corona effect, a dark disk surrounded by an ephemeral glow of red and orange and gold.

A typeface selected for the tagline, both fitting and tongue-in-cheek, comes from the font family “Alien.”

Losensky has begun her own graphic design business, enjoying the collaboration with clients while doing work she loves. (She credits her parents, Scott and Laura, for the motivation to follow her aptitudes. “They always said to never settle for something you don’t want to do,” she says.)

Along with this, she considers her 6-month-old daughter, Bella Rose, to be her happiest inspiration.

On Aug. 21, the artist will stand in awe with the multitudes in St. Joseph. The heavens open themselves to a masterpiece. Losensky has high hopes for the experience.

“Artists do look at the world a different way. I want to repaint this whole world,” she says. “We’re always looking for art, everywhere.”

Even in the moon, with that mysterious man up there.

WATCH: Artist turns an eye to the science of solar eclipse