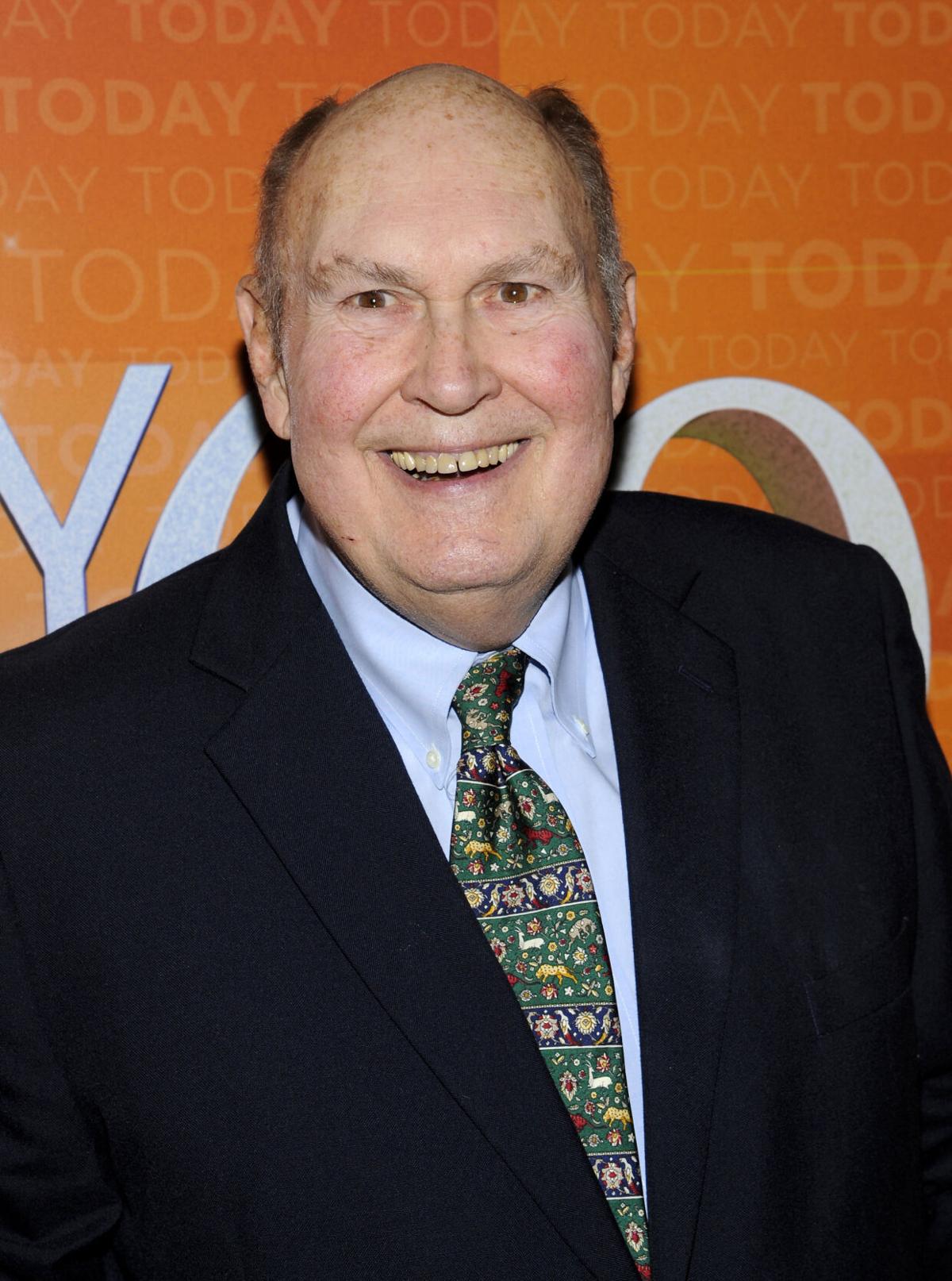 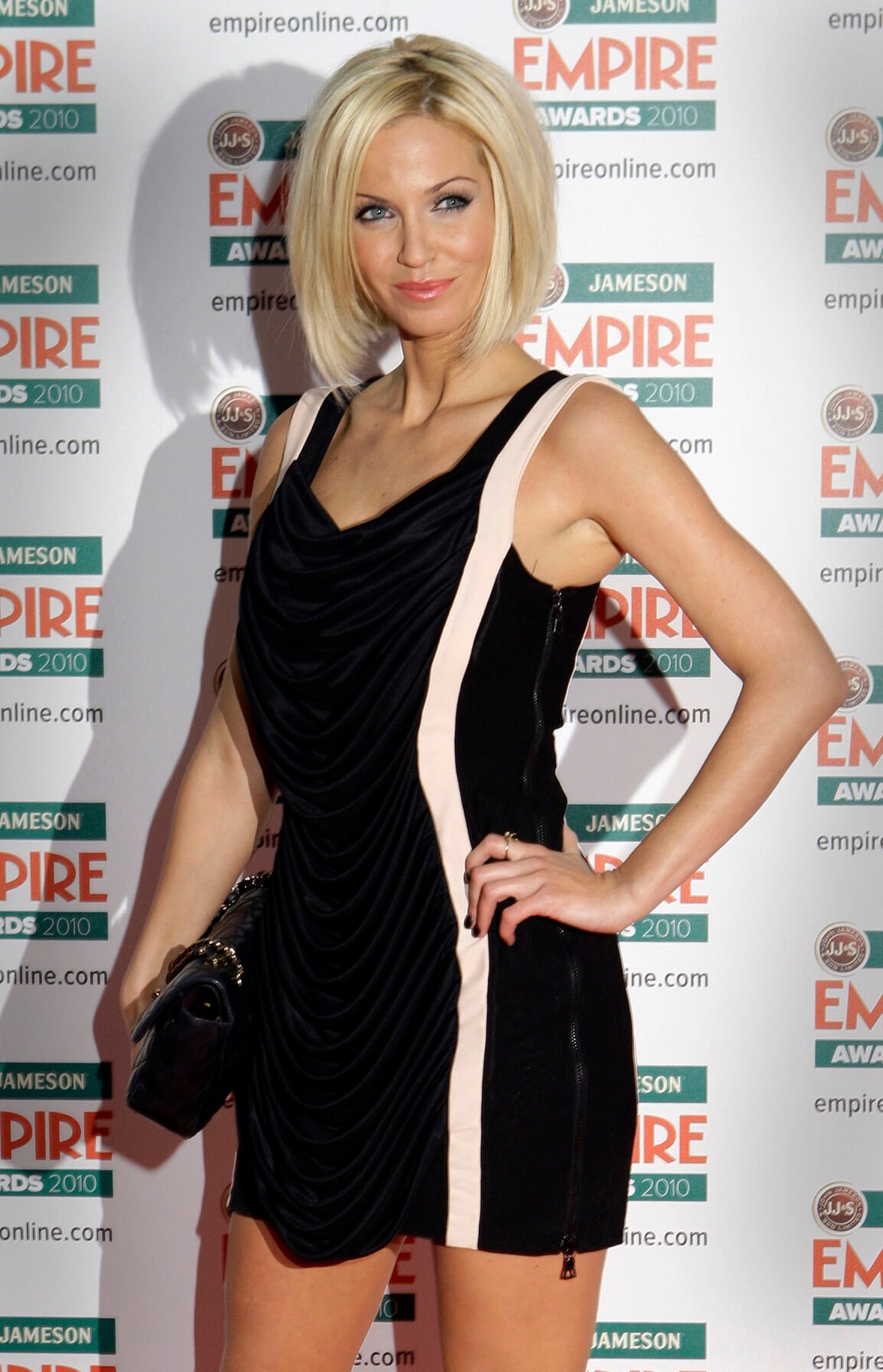 In this 2010 photo British singer Sarah Harding arrives for the 2010 Empire Film Awards at a hotel in central London. 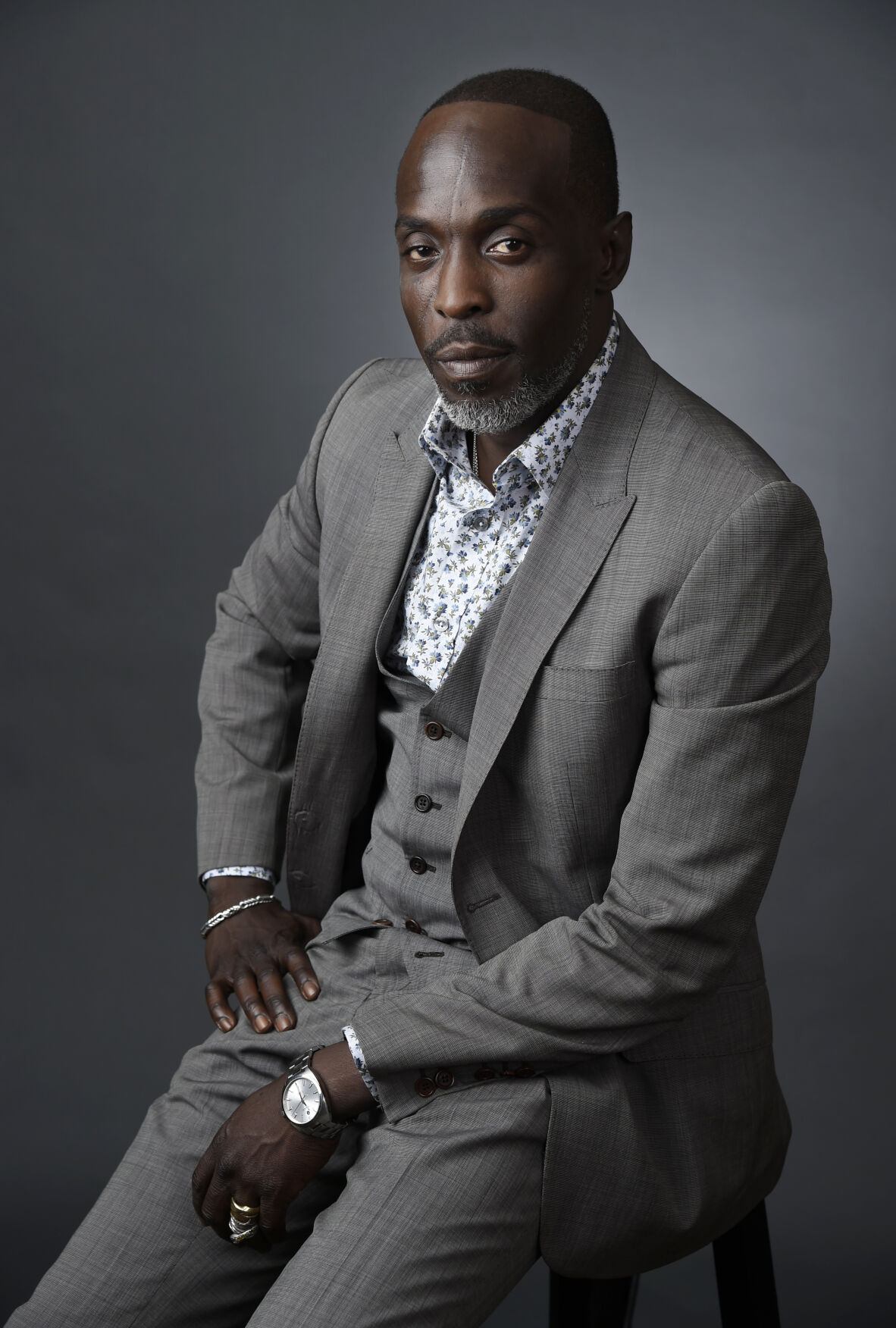 In this 2016 photo Michael Kenneth Williams, a cast member in the HBO series ‘The Night Of,’ poses for a portrait in Beverly Hills, California. 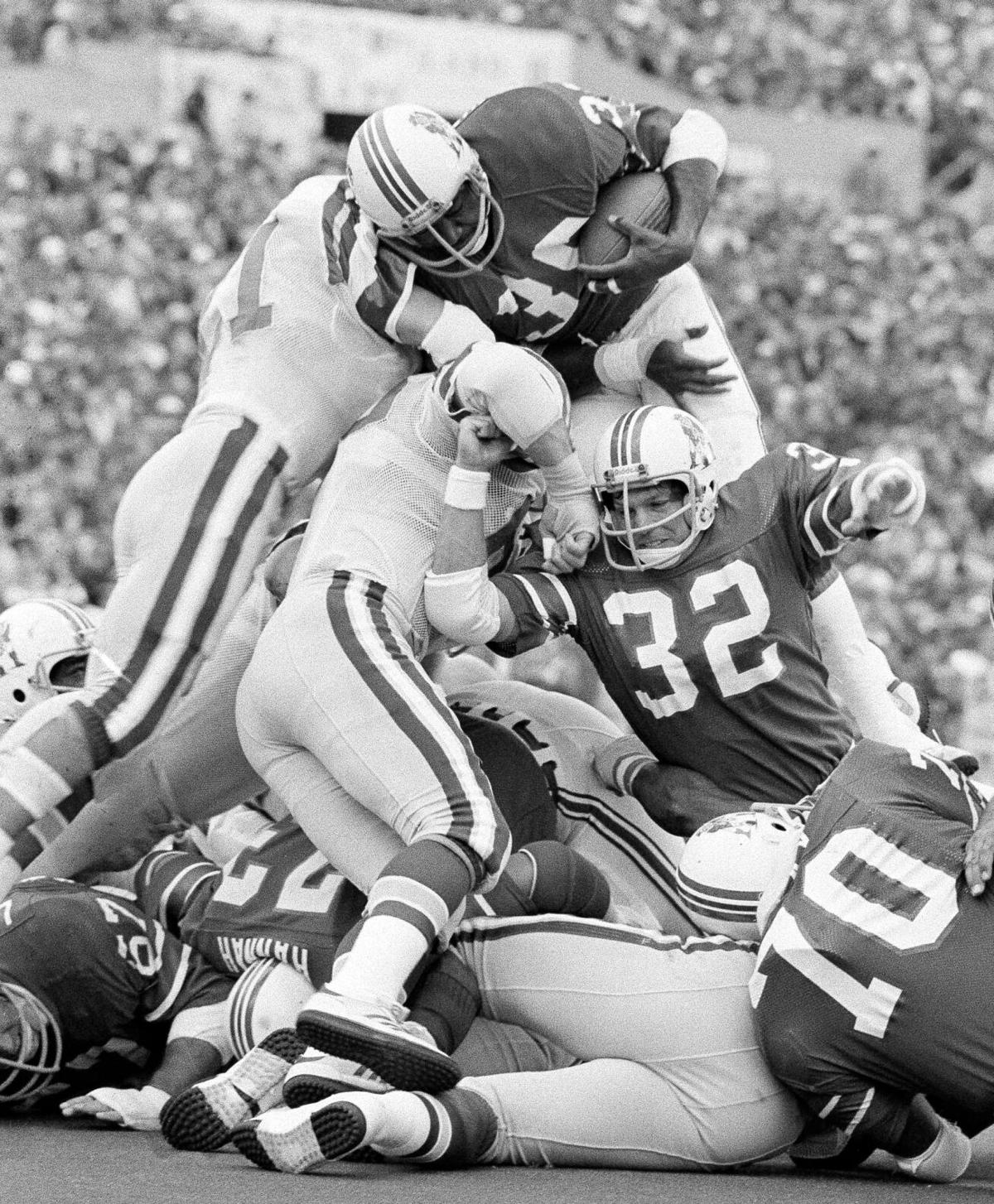 In this 1978 photo New England Patriots Sam Cunningham (39) comes over the top of the Philadelphia line with some help to give the Patriots a 17-0 lead early in a game in Foxborough, Massachusetts. 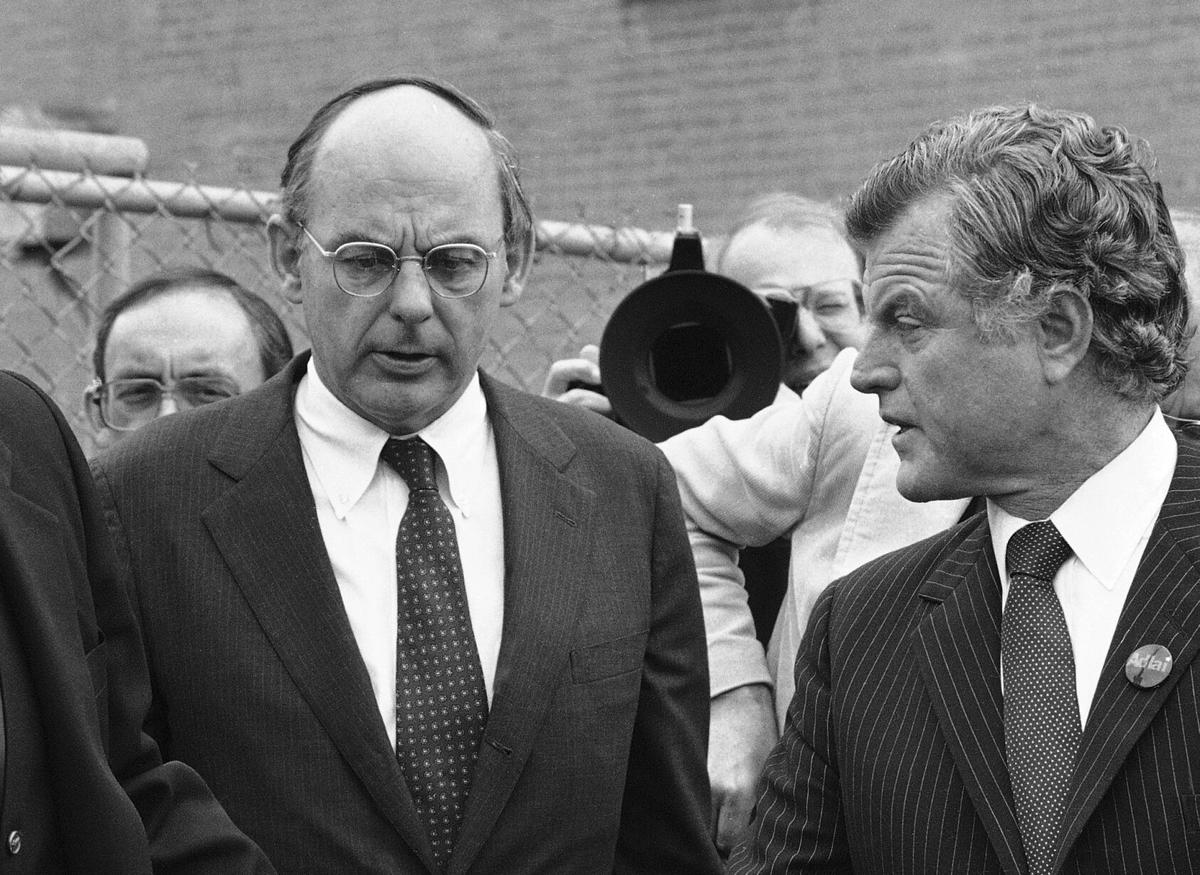 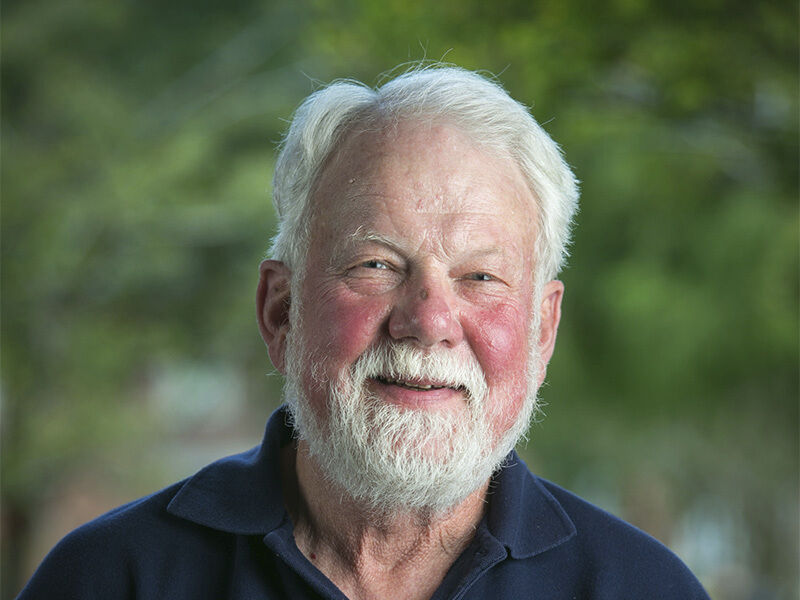 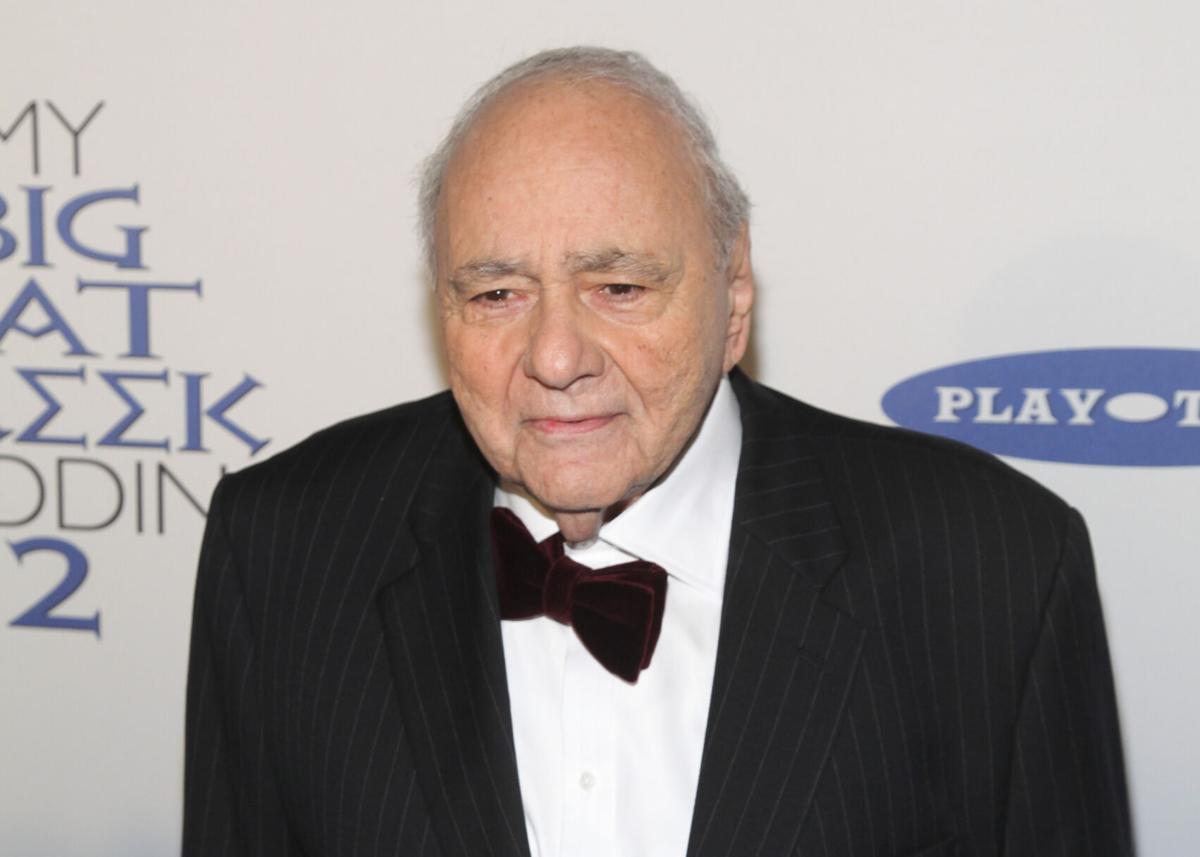 Michael Constantine attends the premiere of ‘My Big Fat Greek Wedding 2’ in March 2016 in New York.

In this 2010 photo British singer Sarah Harding arrives for the 2010 Empire Film Awards at a hotel in central London.

In this 2016 photo Michael Kenneth Williams, a cast member in the HBO series ‘The Night Of,’ poses for a portrait in Beverly Hills, California.

In this 1978 photo New England Patriots Sam Cunningham (39) comes over the top of the Philadelphia line with some help to give the Patriots a 17-0 lead early in a game in Foxborough, Massachusetts.

Michael Constantine attends the premiere of ‘My Big Fat Greek Wedding 2’ in March 2016 in New York.

Tunch Ilkin, a Turkish-born, two-time Pro Bowl offensive lineman with the Pittsburgh Steelers who went on to become a beloved member of the organization’s broadcast team, has died. He was 63 and was fighting amyotrophic lateral sclerosis (also known as Lou Gehrig’s Disease), was hospitalized recently with pneumonia.

Ilkin announced in July that he was stepping away from his radio analyst duties to focus on his treatment.

The popular Ilkin was a fixture on the Steelers’ offensive line after being taken in the sixth round of the 1980 draft. He played 13 of his 14 seasons in the NFL in Pittsburgh, making the Pro Bowl in 1988 and 1989 as an athletic right tackle under Hall of Fame coach Chuck Noll. He appeared in 176 games for the Steelers, making 143 starts.

Ilkin is survived by his wife, Karen, and children Tanner, Natalie and Clay from his marriage to his first wife Sharon, who died in 2012 following a battle with breast cancer.

NEW YORK | Willard Scott, the beloved weatherman who charmed viewers of NBC’s “Today” show with his self-deprecating humor and cheerful personality, has died. He was 87.

Scott began his 65-year career at NBC as an entry-level page at an affiliate station in Washington, D.C., and rose to become the weather forecaster on the network’s flagship morning show for more than three decades. His trademark was giving on-air birthday greetings to viewers who turned 100 years old by putting their faces on Smucker’s jelly jars and delivering weather updates in zany costumes.

He is survived by his wife, Paris Keena, whom he married in 2014, and two daughters with Mary Dwyer Scott, his wife of 43 years until she died in 2002.

LONDON | Singer Sarah Harding of the British pop group Girls Aloud has died after a battle with breast cancer, her mother said Sunday. She was 39.

Harding found fame in 2002 as a contestant on the ITV talent show “Popstars: The Rivals,” which paved the way for her joining Girls Aloud alongside Nicola Roberts, Kimberley Walsh, Cheryl Tweedy and Nadine Coyle.

After Girls Aloud, Harding appeared in several movies and television shows as well as a stage adaptation of “Ghost” the movie. She won the reality show “Celebrity Big Brother” in 2017.

Sam Cunningham, who starred at USC and in NFL, dies at 71

LOS ANGELES | Sam “Bam” Cunningham, an All-American fullback at Southern California whose performance against Alabama was credited with helping to integrate football in the South and who went on to a record-setting career with the New England Patriots, died Tuesday. He was 71.

As a sophomore in 1970 under coach John McKay, Cunningham was part of USC’s all-Black backfield, along with quarterback Jimmy Jones and running back Clarence Davis, which was the first of its kind in Division I.

Cunningham was taken 11th overall in the first round of the 1973 NFL draft by the Patriots. He became the franchise’s career leading rusher with 5,453 yards over nine seasons, while also catching 210 passes for 1,905 yards. He scored 49 touchdowns — 43 on the ground.

Besides his wife, he is survived by daughter Samahndi, two other brothers Bruce and Anthony, niece Vashti Cunningham, a world champion high jumper, and nephew Randall II.

PARIS | Jean-Paul Belmondo, star of the iconic French New Wave film “Breathless,” whose crooked boxer’s nose and rakish grin went on to make him one of the country’s most recognizable leading men, has died at 88.

His death was confirmed Monday by the office of his lawyer, Michel Godest. No cause of death was given.

Belmondo’s career spanned half a century. In the 1960s, he embodied a new type of male movie star, one characterized by pure virility rather than classic good looks. He went on to appear in more than 80 films and worked with a variety of major French directors, from Francois Truffaut to Claude Lelouch and Jean-Luc Godard, whose 1960 movie “Breathless” (“Au Bout de Souffle” in its original French title) brought both men lasting acclaim.

Belmondo, who had recovered from a stroke in 2001, is survived by three children, Florence, Paul, and Stella Eva Angelina. Another daughter, Patricia, died in 1994.

Actor Michael K. Williams, Omar on ‘The Wire,’ dead at 54

NEW YORK | Actor Michael K. Williams, who as the rogue robber of drug dealers Omar Little on “The Wire” created one of the most beloved and enduring characters in a prime era of television, died Monday.

Williams, who had worked in tiny TV roles and as a backup dancer for hip-hop acts before landing the role, had said that reputation started to stick to him in real life.

A civil rights attorney who fought to desegregate Southern schools in the 1960s and was pushed out of his University of Mississippi teaching job amid uproar over his work on behalf of Black clients has died. He was 80.

He argued more than 100 federal cases throughout his career, including a freedom of speech case before the U.S. Supreme Court in 1982 on behalf of an assistant district attorney in New Orleans who sued over her firing. The Supreme Court ruled against Sheila Myers and overturned a lower court ruling that ordered her to be reinstated.

He is survived by his wife, Michelle Girardin of New Orleans, and two sons from a previous marriage: J. Sloane Strickler and Andrew C. Strickler. Other survivors include his daughters-in-law, Amy Karpel and Colleen Long, and three grandchildren: Haley Strickler, George Wyatt Strickler, and Ruby S. Strickler, of Washington, D.C.

NEW YORK | Tony Award-winning producer Elizabeth Ireland McCann, who helped mount an astounding array of hits on Broadway and in London, including “The Elephant Man,” “Morning’s at Seven,” “Amadeus,” “The Life and Adventures of Nicholas Nickleby” and “Copenhagen,” has died. She was 90.

McCann died of cancer Thursday at Calvary Hospital in the Bronx, according to her longtime associate and friend, Kristen Luciani.

McCann was a managing producer of the Tony Awards telecast for a number of years and won nine Tonys during her career, including for the revivals of “Hair” in 2009 and “A View From the Bridge” in 1998.

CHICAGO | Former U.S. Sen. Adlai Stevenson III of Illinois has died at his home on Chicago’s North Side. He was 90.

His son Adlai Stevenson IV, who confirmed the Illinois Democrat died on Monday, said his father had dementia.

Before his health declined, Stevenson kept active organizing presentations and speakers for the Adlai Stevenson Center on Democracy in Libertyville, Illinois. He also worked on the family farm in Hanover, Illinois, raising cattle, growing corn and hay for their feed, and chopping wood.

Michael Constantine of ‘My Big Fat Greek Wedding’ dies at 94

Michael Constantine, an Emmy Award-winning character actor who reached worldwide fame playing the Windex bottle-toting father of the bride in the 2002 film “My Big Fat Greek Wedding,” has died. He was 94.

Constantine died Aug. 31 at his home in Reading, Pennsylvania, of natural causes, his family said. The news was confirmed to The Associated Press on Thursday by his agent, Julia Buchwald.

Constantine was married and divorced twice. Survivors include his sisters, Patricia Gordon and Chris Dobbs.

St. Paul families come together for a parade

SJSD football fans will be greeted with metal detectors