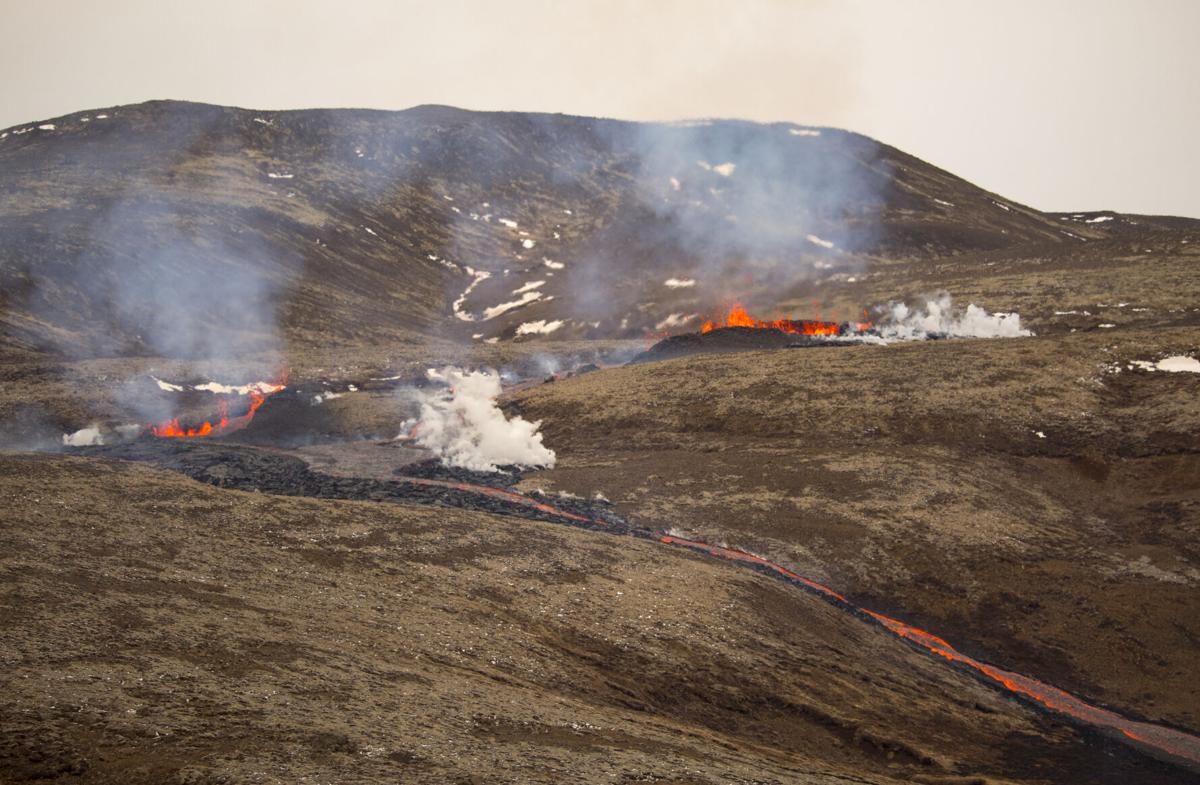 Steam and lava spurt from a new fissure on a volcano on the Reykjanes Peninsula in southwestern Iceland on Monday. The new fissure has opened up at the Icelandic volcano that began erupting last month, prompting the evacuation of hundreds of hikers who had come to see the spectacle. Officials say the new fissure is about 550 yards long and around a half-mile from the original eruption site in the Geldinga Valley. 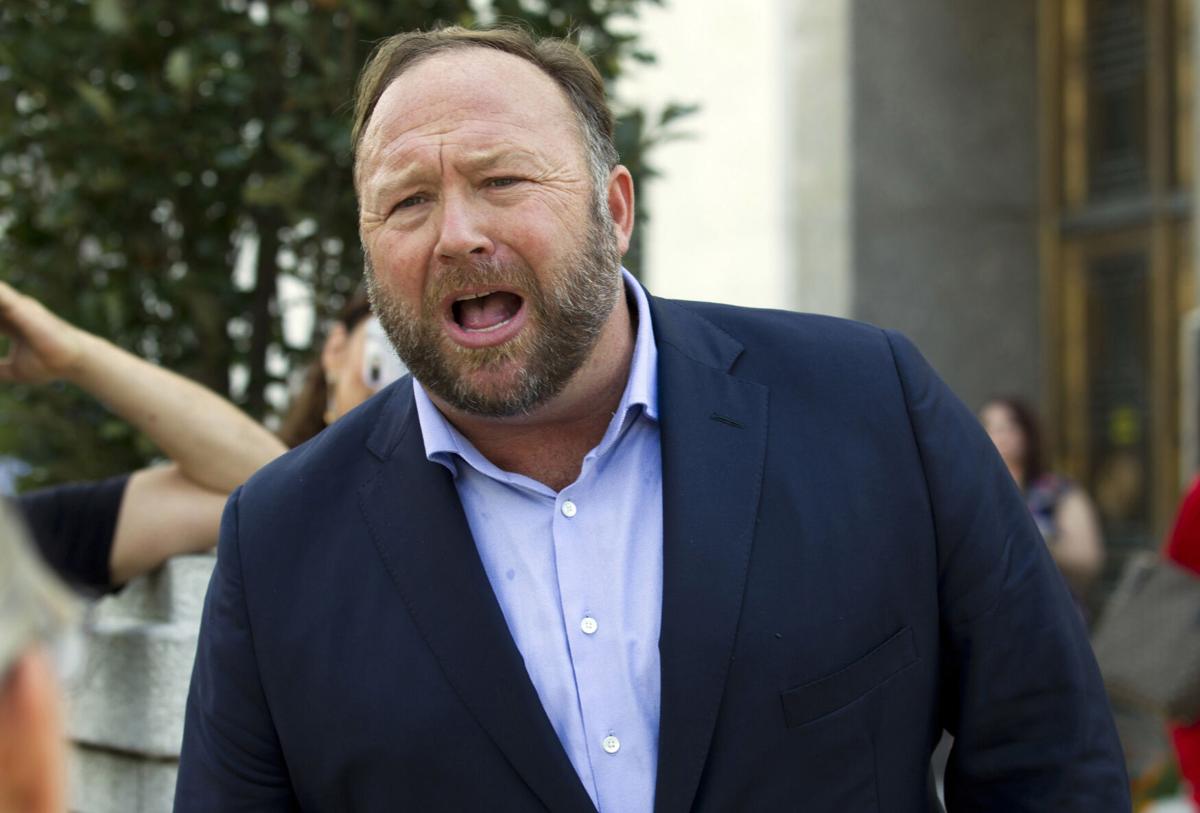 In this September 2018 photo Alex Jones speaks outside of the Dirksen building of Capitol Hill in Washington. The U.S. Supreme Court on Monday, declined to hear an appeal by the Infowars host and conspiracy theorist, who was fighting a Connecticut court sanction in a defamation lawsuit brought by relatives of some of the victims of the Sandy Hook Elementary School shooting.

Steam and lava spurt from a new fissure on a volcano on the Reykjanes Peninsula in southwestern Iceland on Monday. The new fissure has opened up at the Icelandic volcano that began erupting last month, prompting the evacuation of hundreds of hikers who had come to see the spectacle. Officials say the new fissure is about 550 yards long and around a half-mile from the original eruption site in the Geldinga Valley.

In this September 2018 photo Alex Jones speaks outside of the Dirksen building of Capitol Hill in Washington. The U.S. Supreme Court on Monday, declined to hear an appeal by the Infowars host and conspiracy theorist, who was fighting a Connecticut court sanction in a defamation lawsuit brought by relatives of some of the victims of the Sandy Hook Elementary School shooting.

WASHINGTON | The Supreme Court on Monday dismissed a case over former President Donald Trump’s efforts to block critics from his personal Twitter account.

The court said there was nothing left to the case after Trump was permanently suspended from Twitter and ended his presidential term in January.

Twitter banned Trump two days after the deadly attack on the Capitol by Trump supporters on Jan. 6. The company said its decision was “due to the risk of further incitement of violence.”

The court also formally threw out an appeals court ruling that found Trump violated the First Amendment whenever he blocked a critic to silence a viewpoint.

Justice Clarence Thomas wrote a separate opinion arguing that the bigger issue raised by the case, and especially Twitter’s decision to boot Trump, is “the dominant digital platforms themselves. As Twitter made clear, the right to cut off speech lies most powerfully in the hands of private digital platforms.”

Thomas agreed with his colleagues about the outcome of the case, but said the situation raises “interesting and important questions.”

The case concerned the @realdonaldtrump account with more than 88 million followers and Trump’s argument that it is his personal property. The Justice Department argued that blocking people from it was akin to elected officials who refuse to allow their opponents’ yard signs on their front lawns.

Hikers scramble as new fissure opens up at Icelandic volcano

REYKJAVIK, Iceland | Steam and lava spurted Monday from a new fissure at an Icelandic volcano that began erupting last month, prompting the evacuation of hundreds of hikers who had come to see the spectacle.

The new fissure, first spotted by a sightseeing helicopter, was about 550 yards long and around a half-mile from the original eruption site in the Geldinga Valley.

The Icelandic Department of Emergency Management announced an immediate evacuation of the area. It said there was no imminent danger to life due to the site’s distance form popular hiking paths.

The long-dormant volcano on the Reykjanes Peninsula in southwest Iceland flared to life March 20 after tens of thousands of earthquakes were recorded in the area in the past three weeks. It was the area’s first volcanic eruption in nearly 800 years.

The volcano’s proximity to Iceland’s capital, Reykjavík, about 20 miles away, has brought a steady stream of tourists to the area, even with the country in partial lockdown to combat the coronavirus. Around 30,000 people have visited the area since the eruption began, according to the Icelandic Tourist Board.

In video, Biden thanks new U.S. citizens for ‘choosing us’

WASHINGTON | President Joe Biden is thanking naturalized Americans for “choosing us” in his official video message to the nation’s newest citizens.

In the brief remarks, Biden references the “courage” of immigrants coming to the U.S. and his own heritage as a descendant of Irish immigrants. He also praises the contribution they will make to American society.

“First and foremost, I want to thank you for choosing us and believing that America is worthy of your aspirations,” Biden says in the video, calling the U.S. “this great nation of immigrants.”

“You all have one thing in common — courage,” Biden says in the video, released on Monday. “The courage it takes to sacrifice and make this journey. The courage to leave your homes, your lives, your loved ones, and come to a nation that is more than just a place but rather an idea. An idea that where everyone is created equal and deserves to be treated equally.”

Presidents typically record a message to be played at the end of naturalization ceremonies, moments after new citizens take the oath of allegiance. Those proceedings, though, have been abbreviated over the past year because of the coronavirus pandemic, and the video has been among the elements cut for time. The White House and U.S. Citizenship and Immigration Services released the video publicly so that it can be viewed by new citizens and the public from home.

It’s a tonal shift from former President Donald Trump, who released a video later in his first year in office that echoed his campaign rhetoric on teaching American values and heritage.

Biden says in his video that the new citizens have earned “a new title equal to that of an American president.”

“The title I’m most proud of, citizen, citizen of the United States of America,” he says.

The release comes as Biden’s immigration agenda has largely stalled since he sent Congress draft legislation in his first week in office, while he moves to prioritize COVID-19 relief and a push for a $2.3 trillion infrastructure plan this summer. Biden has also been slower to move than activists have wanted in lifting historically low Trump-era caps on refugee admissions for this year, despite pledging to swiftly raise them.

ANKARA, Turkey | Turkish authorities on Monday detained 10 retired admirals after a group of more than 100 former top navy officers declared their commitment to an international shipping treaty, a statement that government officials tied to Turkey’s history of military coups.

The retired admirals were held as part of an investigation into whether they had reached “an agreement with the aim of committing a crime against the security of the state and the constitutional order,” Turkey’s state-run Anadolu Agency reported. The chief prosecutor in Ankara launched the investigation on Sunday.

Four other former navy officers were asked to report to authorities within three days but not detained because of their advanced ages, Anadolu reported.

Authorities also stripped the suspects of their rights to government housing and bodyguards, the news agency said.

In his first comments on the declaration issued late Saturday, Turkish President Recep Tayyip Erdogan accused the admirals of having ulterior motives, dismissing arguments that the former officers merely expressed an opinion.

“This act, which took place at midnight, is definitely an ill-intended attempt in its tone, its method and according to the debates it would clearly lead to,” Erdogan said.

He spoke after summoning a meeting with the head of the intelligence agency, the chief of military staff and some members of his Cabinet to discuss the admirals’ statement.

“It is under no circumstances acceptable for...retired admirals to make such an attempt in the middle of the night in a country whose history is full of coups and memoranda,” Erdogan said.

The 10 retired admirals were detained at their homes in Ankara, Istanbul and Kocaeli, and undergoing questioning by the chief prosecutor’s office in the capital.

Anadolu reported that they included Cem Gurdeniz, the name behind Turkey’s controversial “Blue Homeland” doctrine, which claims vast sections of the Mediterranean and Aegean seas and its undersea energy deposits. The concept is at odds with Greece and Cyprus’ claims in the region.

A total of 103 retired admirals signed the statement declaring their commitment to an international treaty that regulates shipping through the Bosporus and Dardanelles straits, which link the Mediterranean Sea to the Black Sea. The 14 suspects are believed to have organized the declaration.

HARTFORD, Conn. | The U.S. Supreme Court on Monday declined to hear an appeal by Infowars host and conspiracy theorist Alex Jones, who was fighting a Connecticut court sanction in a defamation lawsuit brought by relatives of some of the victims of the Sandy Hook Elementary School shooting.

Jones was penalized in 2019 by a trial court judge for an angry outburst on his web show against an attorney for the relatives and for violating numerous orders to turn over documents to the families’ lawyers. Judge Barbara Bellis barred Jones from filing a motion to dismiss the case, which remains pending, and said she would order Jones to pay some of the families’ legal fees.

Jones argued he should not have been sanctioned for exercising his free speech rights. The Connecticut Supreme Court upheld Bellis’ ruling last year.

The families and an FBI agent who responded to the shooting, which left 20 first-graders and six educators dead, are suing Jones and his show over claims that the massacre was a hoax. The families said they have been subjected to harassment and death threats from Jones’ followers because of the hoax conspiracy.

Jones, whose show is based in Austin, Texas, has since said he believes the shooting occurred.

The U.S. Supreme Court turned down Jones’ request to hear his appeal without comment.

Denim is a great fit for all seasons

Couple prepares for 22nd season as owners of Bob's Lake

Haggard to use extra year of eligibility at Missouri Western