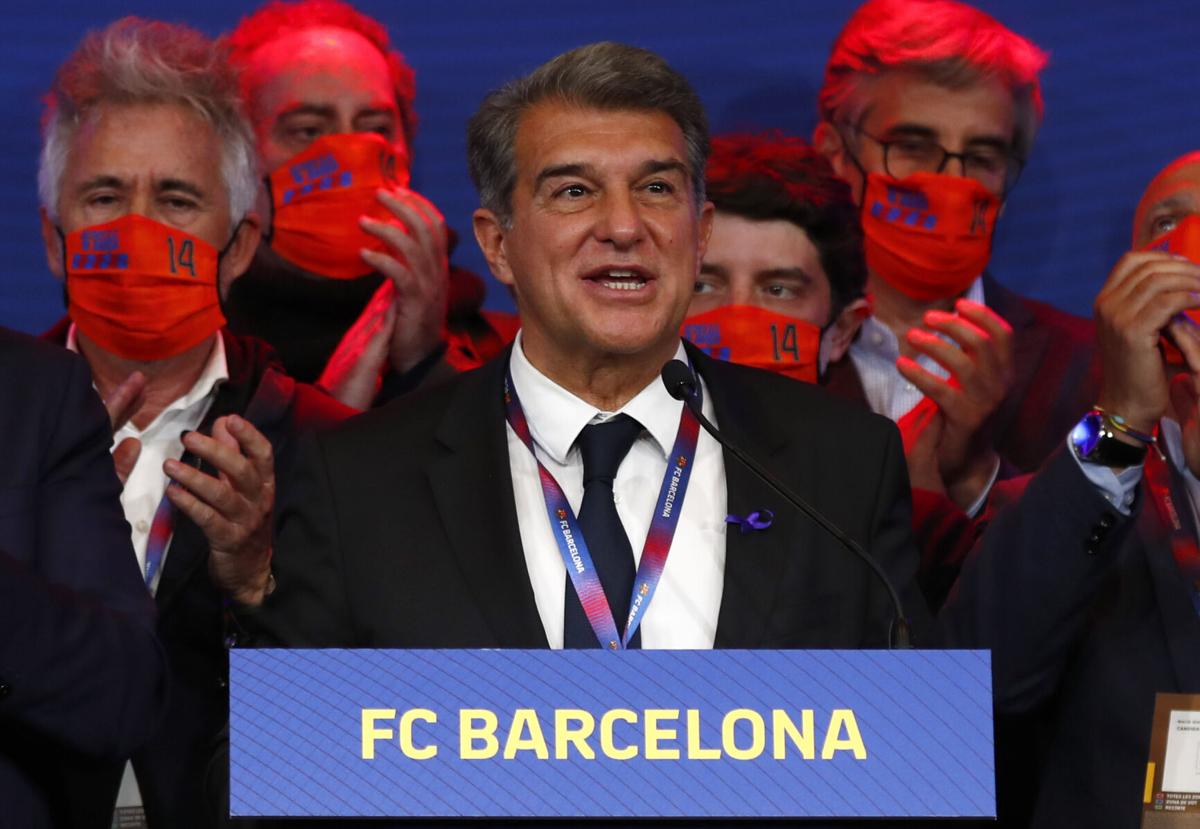 In this March 7 photo, Joan Laporta celebrates his victory after elections at the Camp Nou stadium in Barcelona, Spain. 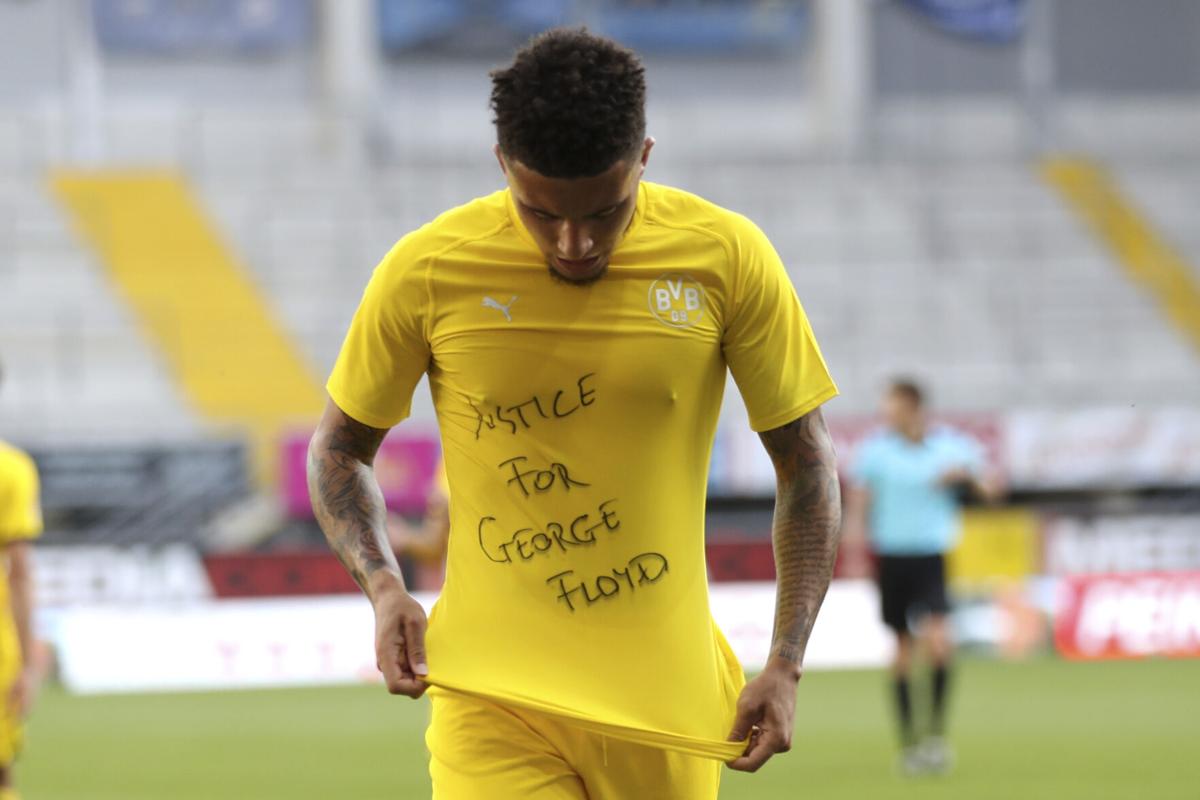 In this May 31 photo, Jadon Sancho of Borussia Dortmund celebrates scoring his teams second goal of the game with a ‘Justice for George Floyd’ shirt during the German Bundesliga soccer match between SC Paderborn 07 and Borussia Dortmund at Benteler Arena in Paderborn, Germany. 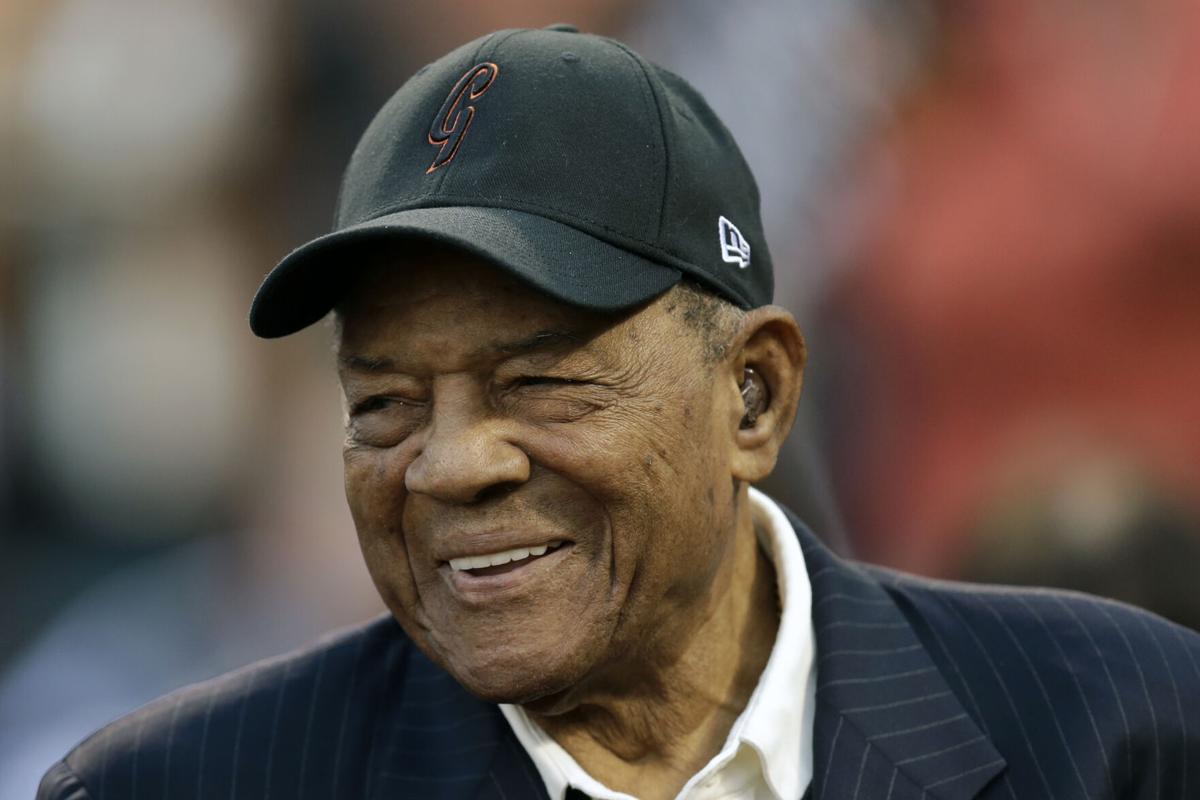 Willie Mays smiles prior to a baseball game between the New York Mets and the San Francisco Giants in San Francisco, in this 2016 photo.

In this March 7 photo, Joan Laporta celebrates his victory after elections at the Camp Nou stadium in Barcelona, Spain.

In this May 31 photo, Jadon Sancho of Borussia Dortmund celebrates scoring his teams second goal of the game with a ‘Justice for George Floyd’ shirt during the German Bundesliga soccer match between SC Paderborn 07 and Borussia Dortmund at Benteler Arena in Paderborn, Germany.

Willie Mays smiles prior to a baseball game between the New York Mets and the San Francisco Giants in San Francisco, in this 2016 photo.

BARCELONA, Spain | The ill-fated Super League has enraged fans and troubled authorities while making allies of a pair of soccer’s fiercest nemeses.

After 10 of the 12 clubs involved in the creation of the breakaway competition quickly dropped out under an escalating backlash, Barcelona president Joan Laporta emerged on Thursday as the sole supporter of the plan hatched by Real Madrid counterpart Florentino Pérez.

“It is absolutely necessary,” Laporta said on Catalan public television in his first public comments on the project. “The biggest clubs create the most financial resources and we must have our say in deciding how the earnings are shared.”

Even so, his own club issued a statement hours after he spoke that was aimed at calming tensions and promised to listen to the plan’s critics.

The six English clubs involved in the competition pulled out Tuesday amid escalating complaints from their supporters and warnings from the British government. A day later, Spanish club Atlético Madrid and the three Italian teams in the project — Juventus, AC Milan and Inter Milan — also opted out.

Despite being left nearly alone, Pérez — the competition’s supposed first chairman — said late Wednesday that the idea was not dead, but rather on standby.

Both Juventus and AC Milan also left open the possibility of joining a Super League at a later date.

Laporta, who previously served as Barcelona president from 2003-10, was re-elected to the post last month. While campaigning, Laporta said he was not in favor of the Super League, but his position changed after taking charge of the troubled club that faces more than 1 billion euros ($1.2 billion) in debt.

The club’s finances have been hard hit by the pandemic, which has compounded problems in a budget that was already loaded by the highest payroll in soccer last season. Laporta’s financial challenges include trying to convince Lionel Messi to sign a new contract when his expires this year.

UEFA President Aleksander Ceferin said Barcelona was the club that “disappointed me the least.”

“Laporta was elected very recently and I spoke to him two or three times. He was under great pressure due to the financial situation he inherited,” Ceferin said. “This happens when you overpay some players and don’t get a result.”

The chances to boost revenue by cutting UEFA out of the equation and replacing the Champions League with the new tournament of 20 teams appeared to be irresistible to Barcelona.

“There have been pressures placed on some clubs, but the proposal is still standing,” Laporta said. “We have very important investments, our salaries are very high, and those must be taken into consideration, along with sporting merits.”

Barcelona’s participation was conditioned by Laporta’s pledge to let the club’s members vote on the proposal.

“We are keeping a prudent stance,” Laporta said. “It is a necessity, but our club members will have the final word.”

Laporta appeared open to tweaking the most controversial part of the project — locking in the 15 founding clubs and leaving only five berths open for other teams to join each season.

“It has to be an attractive competition, based on merit won on the field,” Laporta said. “We defend our national leagues and an open dialogue with UEFA.”

In its statement, Barcelona defended its decision to back the new scheme because, according to the Catalan club, not jumping on board the project “would have been a historic error.”

But the club added that while standing by the Super League, the backlash against it meant “it is undeniable that FC Barcelona understands that a much deeper analysis must be undertaken.

“This deeper analysis requires time and the necessary calm to prevent any hasty action being taken,” the club said.

Time appears to be one thing Barcelona and Madrid have with forces lining up against them.

While Laporta spoke in Barcelona, the other Spanish league clubs not involved in the Super League project met via videoconference with league president Javier Tebas to form a common front against the new competition. Madrid, Barcelona and Atlético were not invited to the meeting.

“I think that Barcelona has bigger problems than taking on the rest of the clubs in Spain and Europe to defend a Super League that is already dead,” Tebas said.

But Tebas saved his strongest criticism for Real Madrid’s president, credited as the mastermind of the project.

“If they say that the Super League will save soccer, they are lying or they are mistaken,” Tebas said. “Florentino Pérez is lying. It can’t help soccer because it would destroy the national leagues.”

Players on the Spanish clubs not in the project wore T-shirts before league matches on Wednesday criticizing it. Otherwise, protests against the Super League have been subdued in Spain compared to England.

Barcelona played its first match since the Super League announcement on Thursday against Getafe, winning 5-2 with a pair of goals by Messi. Getafe players entered the field wearing T-shirts condemning the Super League. Other teams had already done the same in league matches this week.

The pledges came one day after the International Olympic Committee confirmed its long-standing ban on “demonstration or political, religious or racial propaganda” on the field of play, medal podiums or official ceremonies.

Raising a fist or kneeling for a national anthem could lead to punishment from the IOC. The Olympic body’s legal commission should clarify what kind of punishment before this year’s games, which open on July 23.

The IOC also said that slogans such as “Black Lives Matter” will not be allowed on athlete apparel at Olympic venues, though it approved using the words “peace,” “respect,” “solidarity,” “inclusion” and “equality” on T-shirts.

The Hall of Fame center fielder was honored Thursday with a new accolade to be given annually recognizing a living individual who has made “significant contributions to the national game.”

Mays, who turns 90 on May 6, was chosen over five other finalists in voting by a panel of longtime baseball writers, broadcasters, historians and executives.

The Say Hey Kid appears on the cover of Baseball Digest for the fourth time.

“I never worried about personal awards. I worried about winning,” Mays said in a news release. “But to be honored with this Lifetime Achievement Award, that’s a great honor, especially with all the other great names (considered). All deserving. It’s a sports award, it’s a baseball award, but it’s much more. It’s about all the things you do. For me, it’s about helping kids and making sure they’re taken care of because so many people took care of me in my life.”

Mays made 24 All-Star teams and won two NL MVP awards and 12 Gold Gloves during his dazzling career from 1951-73. He moved with the Giants from New York to San Francisco, then finished up with two seasons back in the Big Apple playing for the Mets. He ranks sixth on the career chart with 660 home runs.

“Baseball Digest was honored to cover and celebrate Willie Mays for the duration of his incredible career and we are equally honored to celebrate an entire lifetime of contributions to baseball,” said Norman Jacobs, publisher since 1969. “Just as he thrilled us during a Hall of Fame playing career that spanned four decades, Willie has exemplified the best qualities of our game and our country in the nearly 50 years since his retirement.”

Eagles define Class of 2021 with grit